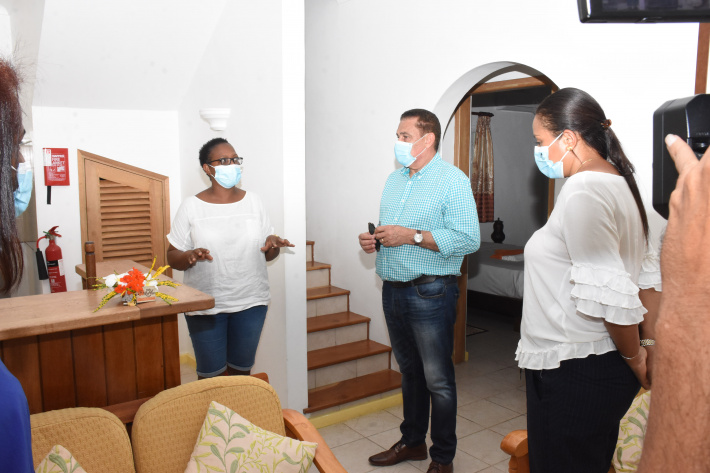 The Minister for Foreign Affairs and Tourism, Sylvestre Radegonde, has described the ongoing conflict between Russia and Ukraine as sad and worrying for Seychelles as it has the potential to affect our tourism industry.

Minister Radegonde was speaking during a tour of a set of tourism establishments around Anse Royale, Fairyland – Au Cap and Pointe au Sel area yesterday.

He was accompanied by the principal secretary for tourism, Sherin Francis; the director general for marketing Bernadette Willemin; and other staff.

In an interview at Villa Kordia, Minister Radegonde said that they tour different regions every Friday to visit both large and small tourism establishments.

The minister stated that the majority of the small establishments (self-catering) are being run by Seychellois. He described them as being ‘o nivo’, clean and well decorated with a cultural touch.

The minister said interestingly enough occupancy is quite high as throughout their visit they could not access certain rooms as they were occupied.

He said it seems regardless of the current situation the small establishments are still operating at high occupancy, a situation that is encouraging.

At two of the small hotels the minister was happy to note that two students from the Seychelles Tourism Academy (STA) are currently on attachment.

Minister Radegonde however described the ongoing war between Russia and Ukraine as sad and worrying. He ascertained that Seychelles has taken a stance by two key factors, one whereby he met with a Russian delegation and the second by the vote in the United Nations resolution. “We condemn what is happening. The Russian forces that has invaded Ukraine must withdraw their troops and all parties concerned must settle their issues through diplomatic negotiations,” Minister Radegonde said, describing this as “the basic laws of the United Nations”.

The minister stated that this situation is worrying for Seychelles because as with the pandemic that had already affected the western European market, Seychelles had focused its efforts on the eastern European market which include Ukraine and Russia. The war has the potential to affect this market as Ukraine’s air space is currently closed. Ukraine was the fourth largest market to Seychelles till now. The minister said the priority of the Ukrainians is their security and safety therefore we are expecting some cancellations.

In the case of Russia, international flights are still active that connects to Seychelles therefore there is the possibility of Russian tourists as we are still getting some aircraft coming in and few cancellations. In spite of that it is not at the expected level and following the sanctions placed on Russia, the most immediate impact is on the Russians’ spending power.

Minister Radegonde characterised the situation as challenging for them to access payment via SWIFT, mastercard and so forth.

“This (yesterday) morning 250 passengers from Aeroflot might already face the possibility of being unable to pay for their stay.”

Minister Radegonde said in view of the situation Seychelles is already researching other markets to complement what it currently has. The projected number of tourists for this year, 258,000, will not be achieved, the minister claimed.

He highlighted that at present various international media organisations wish to interview him on Seychelles’ stance with regard to the situation.

Minister Radegonde stressed that Seychelles is a small country; we have condemned the actions of Russia by respecting the United Nations laws as it is in our national interest.

He added that we will apply the sanctions that the UN places though currently to his knowledge we have not been asked to seize any assets or restrict any vehicle in our territory.

Minister Radegonde stated that Seychelles is not part of the war. “We are not at war with the Russians, the Ukrainians or their civilians.”

With approximately three establishments owned by Russians in Seychelles, the minister stated that there is a risk of the economy and the tourism sector destabilising.

The minister stated that we must keep an eye on the situation and be aware of future impact the sanctions and the war will create. 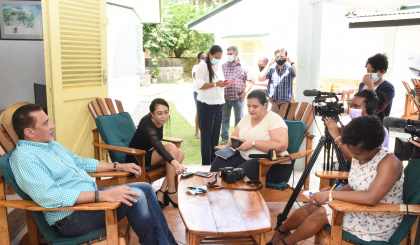 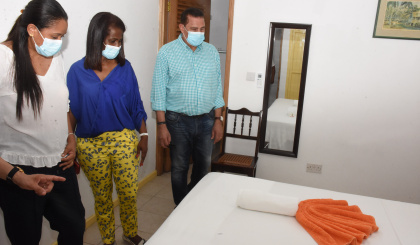