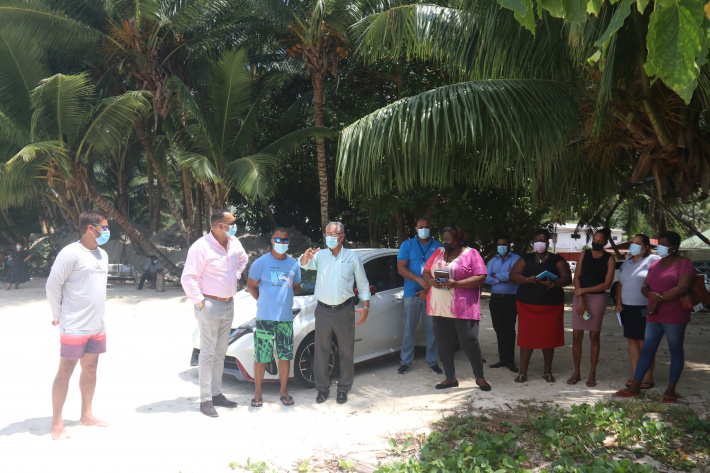 Designated Minister and Minister for Fisheries and the Blue Economy, Jean François Ferrari, has said his ministry and the Seychelles Fishing Authority are satisfied with work done to open a sea channel for fishing boats at Anse à la Mouche.

He made the comment during a site visit to inspect excavation work that had been done to create an all-tide access for fishers and other users of the area which started in early January. He was accompanied by the chief executive of the Seychelles Fishing Authority (SFA), Nichol Elizabeth, and other representatives from the ministry, SFA, environment department, Anse Boileau-Anse à la Mouche Fisher Association and from the districts of Anse Boileau and Baie Lazare.

The channel funded by the European Union (EU) under the Sectoral Support Fund and excavated by United Concrete Products Seychelles (UCPS), has cost R2,285,514.00, inclusive of R200,000 for an extra extension of 30 metres (not in the initial project) which brought the total length to 275 metres, 15 metres in width and 2 metres in depth at low tide. So the main aim of the project is to facilitate the lives and activities of primarily fishers in the area including promoting the growth of fishing and other related spillover activities.

The need for an all-tide access in the area was brought to the attention of the Ministry of Fisheries and the Blue Economy by the fishers and boat owners of Anse à la Mouche through their association concerning the difficulty to load and unload their vessels during low tide.

Following various site visits and consultations between SFA, the fishers, representatives of the Anse Boileau-Anse à la Mouche Fishers Association, department of environment, Seychelles Maritime Safety Authority (SMSA), Ministry of Lands and Housing, members of the National Assembly and the district administrators of both districts, it was agreed that some excavation work needed to be conducted to open the channel and create the all-tide access.

To make the area safe for other users, the SFA has already started putting buoys to demark the channel passage way and that of where bathers and others can enjoy in their leisure time.

On behalf of the Anse Boileau-Anse à la Mouche Fisher Association and fishers in the area, the secretary of the association, Peter Purvis, said they are satisfied with the work done.

He added that due to natural changes in relation to sea and sand in the area, it will take some time and some trials to determine if the channel is a success.

According to Designated Minister Ferrari, the channel is supposed to last for some 12-15 years with possible few maintenance at times to remove sand that could have accumulated at the bottom.

As a result of the excavation, 18,000 cubic metres of coral fill were retrieved and mountain stocked nearby. Described as an eye sore, Designated Minister Ferrari said part of it will be distributed for free to residents and other government institutions, like schools in the two districts (Anse Boileau and Baie Lazare) who have been affected or are seen to be vulnerable to flooding, among other disaster calamities.

He added that residents who wish to acquire the coral fills will have to do so through their district administrative office.

“We are working closely with the Ministry of Local Government and Community Affairs to ensure that people who need coral fill to deal with flooding and other calamities in their area, can access this material,” Minister Ferrari said.

With regard to the remaining coral fill, Minister Ferrari stated it will be shared among government ministries and departments that need the material to implement their projects, especially the department of environment, which will conduct mitigating works on the shorelines at Baie Lazare and other places.

He added that some of it will also be used by partners developing the area, namely the hotel developers at Anse à la Mouche, in a bid to recoup some investment made.

He stressed though that the coral fill will not be for sale or given to other residents in other districts.

The accompanying photos show Minister Ferrari and his delegation visiting the site. 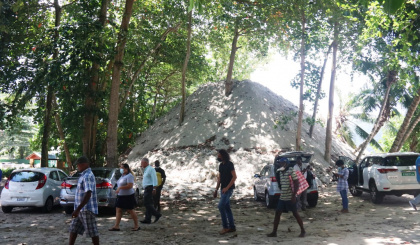 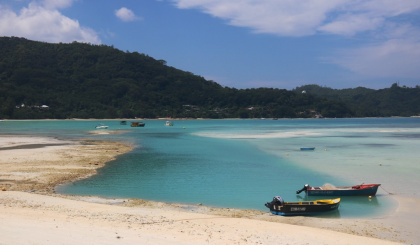