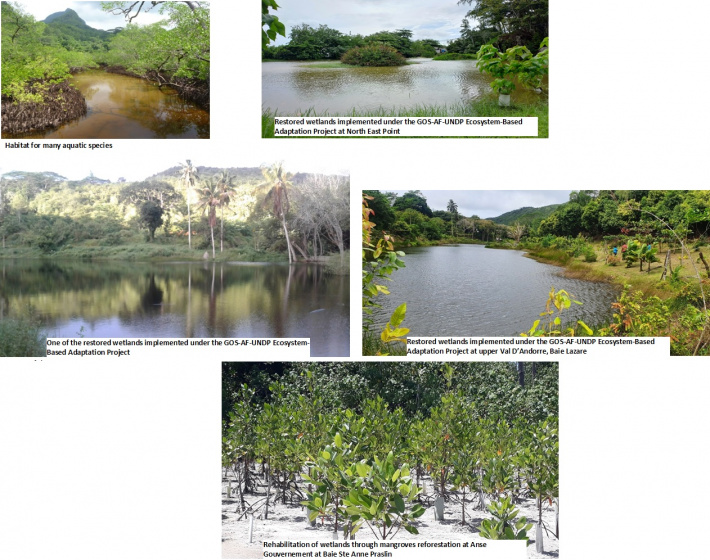 Seychelles celebrates another World Wetlands Day today, February 2, 2022 as it has been the case for many years now since it joined the Ramsar Convention in 2005, bringing forth the importance of wetlands in our community, like many other countries around the world that are members of the Ramsar Convention.

For the first time since the Convention in 1971, World Wetlands Day is being recognised as an event endorsed by the United Nations, following its adoption by the General Assembly on the August 30, 2021.

The theme chosen for this year is ‘Wetlands Action for People and Nature’, putting people at the centre of the importance of the sustainable use of wetlands to safeguard the livelihoods of the one billion people who directly depend on these fragile ecosystems for their survival.

Despite these successes and continued efforts, wetlands are being lost at an alarming rate, more than other ecosystems. Thirty-five percent (35%) of wetlands have been lost in the last fifty years. Challenges faced by wetlands are mainly from climate change and anthropogenic pressures, such as development, agricultural activities, pollution, and reclamation just to name a few.

Such challenges demand prompt actions at all levels to reverse the trend in the depletion of these ecosystems, which offer unmatched opportunities when the right actions are taken within a sustainable use framework. With emphasis being put on lowering the amount of greenhouse gas (GHG) into the atmosphere, mangrove areas are seen as the most effective carbon sequestration and carbon storage in peatlands is as twice as much as in forest ecosystems.

Seychelles is among the leaders in the protection, management, and restoration of wetlands from a statement made by the general secretary of the Ramsar Convention for including the management of wetlands in its Intended Nationally Determined Contributions (INDC). As a small island state, Seychelles has already declared three Ramsar sites ‒ Port Launay and Aldabra coastal wetlands and Mare aux Cochons, a high altitude freshwater wetlands.

Our country’s commitment to wetlands management is embedded in its 2020 updated Nationally Determined Contributions (NDC) towards limiting GHG through mitigation measures, including the protection and enhancement of coastal wetlands, through mainly three key targets:

ii.            Intend to regulate all its coastal planning and infrastructures at the national and local level and consider the “blue” Nature-based Solution as a priority for climate resilience.

iii.            And, to establish a long-term monitoring programme for seagrass and mangrove ecosystems by 2025 which would include the GHG sink of Seychelles’ blue carbon ecosystems within the National GHG inventory by 2025.

In addition, many adaptation measures, through projects and programmes have resulted in mitigation co-benefits for the country. As is the case globally, our coastal wetlands especially mangroves forests are vital for carbon storage and measures to protect and enhance their ecosystems will produce multiple environmental and socio-economic benefits through their products and services, such as fish, crustaceans, coastal protection, carbon sinks, protection to seagrass and coral reefs among others.

Among the contributions locally to improve and enhance wetlands ecosystems, we have seen continuous efforts through projects and programmes, such as mangrove restoration projects under the Ecosystem-Based Adaptation completed under the South-South Corporation – Seychelles – China, UNEP/JEF. Large areas of degraded wetlands have been restored on Praslin at Nouvelle Découverte, Cap Sammy, and Anse Gouvernement, which have yielded considerable benefits to the local communities such as farmers, fishermen, and residents.

Eco-system based adaptation projects for the restoration of watersheds, marshes, and embankment protection using the ecosystem-based adaptation, by UNDP/PCU. A number of projects have been implemented on Mahé, in the south-west region, mainly in Anse Royale, Baie Lazare, and Anse Boileau, where about 7.1 hectares of wetlands have been restored, providing farmers and residents with more than 47,000 cubic meters of water during the dry season.

The UNDP/PCU under the ecosystem-based adaptation restored the entire North East Point wetlands last year. It comprised the removal of invasive aquatic species like water lettuce, water hyacinth, and water lily. De-silting works were also carried out to increase the retention capacity of the wetlands during heavy rainfall.

In addition, the department of climate change and energy has completed mapping of all wetlands, at mangrove species level, including associated wetlands vegetation on Praslin in collaboration with the Praslin environment office under a Seychelles Conservation and Climate Adaptation Trust, (SeyCCAT), funded project.

Activities to celebrate World Wetlands Day 2022 will be low-key compared to previous years due to the Covid-19 pandemic that is ravaging the world. Most of the activities will focus on education and awareness through a few media programmes such as;

4)        Biodiversity and Conservation Management will post a small quiz about wetlands on its Instagram page and promote a World Wetlands Run to bring forth awareness on the importance of wetlands.

5)        The Seychelles Island Foundation will be organising a virtual presentation of the Aldabra wetlands for all schools and staff of the ministry who will participate in this interactive presentation on February 4.

More activities have been planned to commemorate the day, such as tree planting, talks with schoolchildren among others, but due to Covid-19 restrictions on large group gatherings, these activities will be carried out later during the year.

Department of climate change and energy