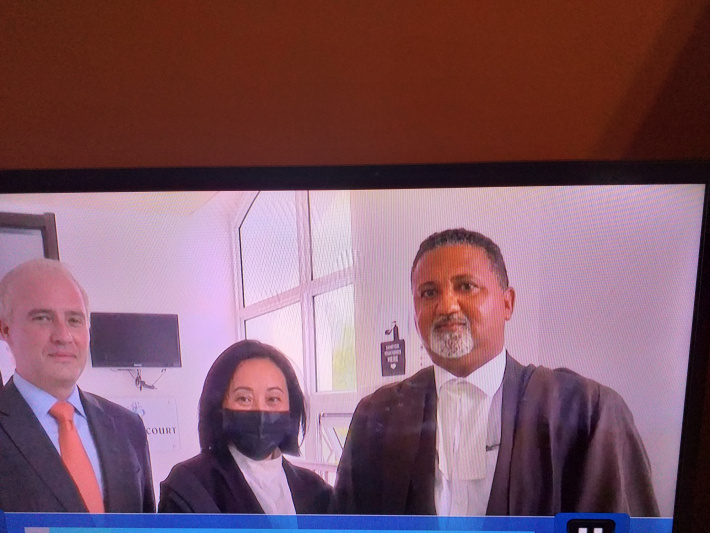 One of two foreign lawyers, Miranda Ching from the United Kingdom and who will work alongside Seychellois lawyer Frank Elizabeth in defending the Valabhji couple ‒ Laura and Mukesh ‒ in the disappearance of the US $50 million as well as the case of possession of arms and ammunition, was sworn in before the Supreme Court yesterday morning.

She then presented her legal and application documents to Chief Justice Rony Govinden.

The two lawyers work together at the Kobre & Kim law firm in the United Kingdom (UK) which focuses exclusively on disputes and investigations involving international fraud and misconduct.

Following her swearing in, CJ Govinden explained to her the different conditions she has to abide by during her period of duty here.

Among the conditions she can work for a period of six months after which she can renew her gainful occupation permit (GOP), she needs to be sworn into office before being allowed to practice something she did before Justice David Esparon and she also has to pay a security bond of R50,000 and she should not take any other duties outside the mentioned cases.

Lawyer Frank Elizabeth said the important thing is that Ms Ching has been authorised by CJ Govinden to represent the two accused.

“Under Section 12 of the Legal Practitioners’ Act she will be present at the case when it begins hopefully soon and we will assist them,” lawyer Elizabeth said.

Meanwhile lawyer Huth, an American, was not sworn in because he is not from the Commonwealth jurisdiction. Another foreign lawyer, James Lewis, a specialist in criminal and civil cases, is also expected to join the team next month.

Another suspect in the 142kg drug case, human trafficking released

Another suspect in the 142kg drug case, a 41-year-old casual labourer, was released yesterday based on certain conditions agreed to with the Attorney General’s office. With his release only three accused Seychellois suspects and 11 Iranians in the case remain in police custody.

Yesterday morning out of the four Seychellois only three appeared before CJ Govinden as one was declared ill by prison authorities.

The prosecutor in the case, lawyer George Tachet, informed the court the Attorney General’s office has removed all charges against the 41-year-old casual labourer because he has agreed to help with the case.

Meanwhile, with regard to the human trafficking case where Andy Bistoquet was recruited to be transferred on an Iranian dhow and subsequently transported to Iran in a plot by the group of Seychellois and Iranians, the group was officially charged for human trafficking on December 23.

SADC members review programme and training for members of FPAC |20.05.2022