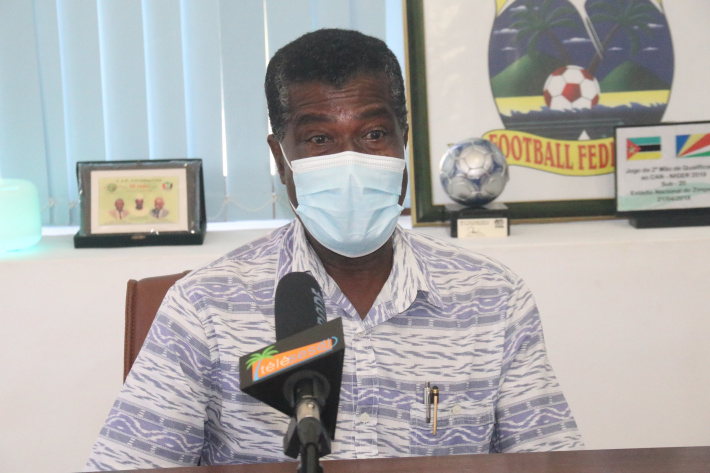 The resumption of club football after the Christmas break was scheduled for yesterday, but the local football governing body has decided to postpone it over growing concerns by the health authorities about the new variant of coronavirus ‒ Omicron ‒ and the hike in the number of cases.

Seychelles Football Federation (SFF) chief executive George Bibi told the media yesterday morning during a press conference at the Maison Football that the club competitions commission has decided to postpone the restart of all competitions.

SFF director of competitions and club licensing, Clive Delorié, was also present for the meeting with the press.

“Although the decision by the health authorities on the taking place of sporting activities right now is not clear, and also because some clubs have told us they have been asked by the police to stop training, we have taken the decision to postpone the resumption of all competitions,” said Mr Bibi.

He added that the SFF was also inclined on taking the decision as the Fédération internationale de Football Association (Fifa) international break is between January 24 and February 2.

“Hopefully we will be able to resume playing football in early February,” said Mr Bibi who added that Seychelles and the world will have to learn to live with Covid-19.

“As far as I can see, we have to learn to live with Covid-19 as it is there to stay. Sports are being played around the world despite players contracting Covid-19 and there is no research to prove that sportsmen and women can catch Covid when practising their sports,” argued Mr Bibi.

Since the SFF did not get the green light from the health authorities to begin the new season 2021-2022 in August to end in May 2022 as planned, the ongoing league competition is a short one.

The SFF expects to complete the SFF league in May 2022 in time to resume the 2022-2023 league season in August 2022. As a result, the SFF had to sacrifice two knockout competitions ‒ Airtel Cup and SFF Cup ‒ last year.

The men’s Premier league has been designed in that manner to minimise the cost of travel by teams in this time of the pandemic.

The Mahé Premier League is being played on a round robin basis (home and away) while the Inner Islands Premier League will be played over three legs. The three top finishers from the two leagues will clash with each other in the one legged, either home or away, in the SFF Premier League Championship.

As the Mahé Premier League is an open league, the remaining five teams shall continue playing each other to accumulate points to earn the highest finish possible. The team who finish last will be relegated to the Championship league, while the one who take seventh position will meet the Championship runners-up in a two-legged playoff.

SFF chief executive Bibi noted that the local football governing body will use the international break to get the national team together for training ahead of competing in the TotalEnergies Africa Cup of Nations (Afcon) 2023 qualifiers.

Mr Bibi added that the Seychelles national football team have to take part in the forthcoming Afcon qualifiers after not doing so over the past two years.

“We run the risk of a heavy fine if we don’t take part in the qualifiers this time round,” said Mr Bibi.

The draw for the qualifiers of the 34th Afcon to be hosted by Ivory Coast in June-July 2023, will take place on January 21, 2022 in Douala, Cameroon, host country of the ongoing 33rd Afcon which kicked off on Sunday.

The Confederation of African Football (Caf) has confirmed that the lowest-ranked teams of its 54 affiliates will play the preliminary qualifying. The winners will advance to the qualifying group stage comprising 48 teams.

Ivory Coast will play in the group phase and even if they fall outside the top two places in their group, they will qualify as the hosts.

The preliminary round will be played on a knock-out system; home and away matches and will include the lower-ranked teams as per the Fifa rankings. The teams qualified from this round will reach the group stage composed of 48 teams.

From the 12 groups, the top two teams will advance to the finals, where 24 teams will be playing in Ivory Coast in 2023.

In the qualifiers for the ongoing Afcon 2021 being played in Cameroon, Seychelles lost at home to South Sudan to bow out in October 2019.

Seychelles needed to put up a spirited fight to get at least a 1-0 win to progress to the group stage of the qualifiers, but instead they lost by the same scoreline at Stad Linite to be eliminated.

Following a narrow 1-2 away loss at the hands of the Bright Stars of South Sudan in the first leg match of pot five played at the Al- Merriekh Stadium in Khartoum, Sudan, Seychelles under Dutch coach Jan Mack stood a chance of going through. The 0-1 home loss meant they bowed out of the qualifiers on an aggregate score of 1-3.

After Darrel Damou inexplicably sent his 6th minute shot crashing against the post when it looked easier to score, the visitors netted the only goal of the game in the 71st minute through Joseph Nayar.

South Sudan joined Burkina Faso, Uganda and Malawi in group B of the qualifiers.