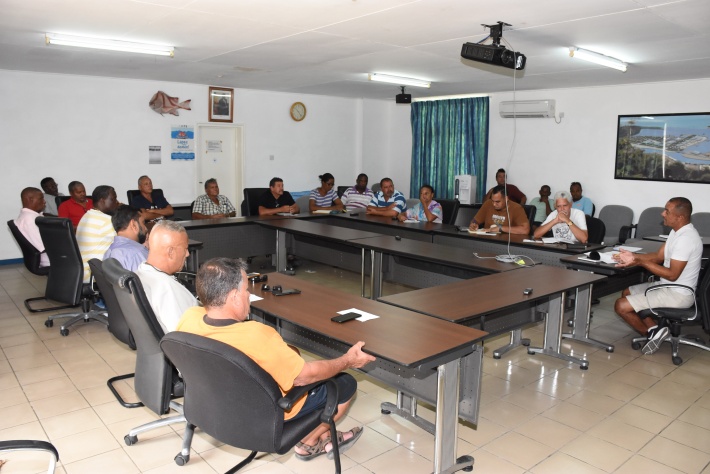 The Fishermen and Boat Owners Association (FBOA) on Wednesday held its general meeting at the Seychelles Fisheries Authority (SFA) training room whereby they discussed the tax regime for fishermen and boat owners as well as the provisions of the newly launched fisheries comprehensive plan by the Ministry of Fisheries and Agriculture.

Chairman of the association, Keith Andre, commenced the meet by addressing all present explaining the delay in scheduling the meet on account of the moratorium enforced by the SFA on all fisheries-related projects while the newly launched three-year fisheries comprehensive plan was awaiting approval.

Discussing the tax regime applicable to fishermen and boat-owners, chairman Andre remarked that it is difficult to find an appropriate structure by which to tax fishermen due to the nature of the job and proposed a simplified way to collect contributions through fishermen registration fees or boat license fees.

He noted that the association has already forwarded such proposition to the Seychelles Revenue Commission (SRC) and concerned ministries in prior meets in 2017.

“I totally agree that we need to contribute towards the tax but there is already a limited amount of Seychellois fishermen in the industry so how will they react to being taxed? I propose an increase in the license and registration fees since it is paid just once annually. Let’s show our goodwill to the government and let them know that we are willing to contribute,” Mr Andre stated.

According to chairman Andre, there are 1100 registered fishermen in Seychelles.

Members of the association present voiced their concerns regarding taxation noting that the government generates tax from the catch of fishermen, for instance when it is sold to tourism establishments and business organisations.

Boat owner Elvis Hoareau explained the difficulties in collecting taxes from fishermen asserting the need for an equitable structure.

“It is a concern for us as boat-owners since to collect tax from individuals in the fisheries industry is quite hard. For instance, it is common for workers to work one month on a boat and then change boats and the nature of the work itself makes is quite hard. Increasingly, it is becoming difficult to get workers as no young people want to join the industry and now the tax regime is becoming a burden. That is not to say that we do not want to contribute but the system they have put in place is very difficult to implement as it means some will be required to pay while others are not. We want a system that is fair so that everyone will contribute and there is no discrimination,” Mr Hoareau stated.

With regard to the three-year comprehensive plan, the association acknowledged some provisions of the plan as valid and based on public consultations, but voiced that a draft of the plan should have been circulated to the fishing community prior to approval for verification as to whether it actually addresses the issues raised by stakeholders.

“I read the plan in all its entirety and I derived that out of 69 pages for a three-year plan, 45 pages is dedicated towards implementing regulations pertaining to domestic fishing activities, longline, whalers and outboards. The regulation included do make sense, but I consider them long overdue, in terms of security especially. Often there are accidents that occur due to lack of basic safety equipment onboard vessels at sea so that is a good provision. But the timeframe is set for 2020 which is only a mere 4 months away. I am not questioning the capacity of individuals within concerned organisations but the organisation’s capacity to implement such provisions,” chairman Andre noted.

Chairman Andre noted that authorities such as SFA and SMSA who are to implement and enforce the regulations of the plan already face major challenges in discharging their basic mandated functions and proposed that some provisions in the plan should be implemented in a phased approach.

Similarly, boat owner Mr Hoareau acknowledged provisions in the plan pertaining to semi-industrial fishing as valid but noted that such actions should have been implemented sooner.

“There are several provisions in the plan that are well-thought out especially pertaining to semi-industrial fishing activities and if nothing was done, it would collapse since we only have two small facilities that export fish currently. The minister is proposing that the government will construct a factory for the exportation of fish but we are of the view that these actions are coming too late. For many years, we have been pointing out the shortcomings and problems pertaining to fish exports and nothing was done but now with the plan, we are not saying it is not a good thing that they are trying to do but we are also acknowledging that the fault is partly theirs for not making such provisions earlier. Now the plan suggests that the government will also be engaging in business. They have said many times before that they have a facilitative role but that they will leave the business aspect to local entrepreneurs in the industry but we have understood that it will need to engage in business because of the current situation,” Mr Hoareau said.

“But the boat owners have pointed out that we would not like to see the business end up in the hands of foreigners as with Oceana Fisheries. With Oceana we have lost a large factory which is part of the reason why semi-industrial fishing is not thriving and we don’t have the facilities in place to export fish stocks. Oceana is not playing this role and we would like to avoid this happening in future,” Mr Hoareau stated.

The association also discussed means towards making industrial purseri fishing activities more sustainable noting that foreign vessels, even though licensed, can overexploit local fish stocks to the disadvantage of local fishermen in years to come.

“The ministry did host public consultations at district level which is right but unfortunately, when the plan was drafted, they did not return to stakeholders and provide them with an opportunity to review the plan before finalisation and to ensure that everyone is happy. Had they done that, we would have a near-perfect plan but now there are certain provisions which boat owners and fishermen feel have been left out or are not realistic,” Mr Hoareau said.