36th anniversary of the assassination of Gérard Hoarau |29 November 2021 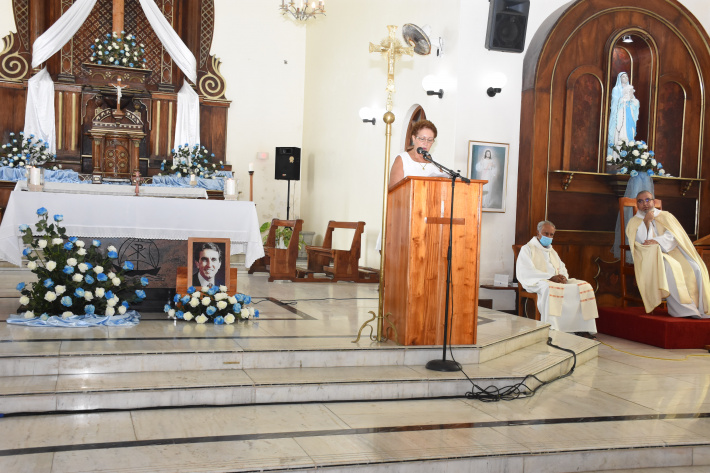 One of the testimonies (Photo: Louis Toussaint)

To commemorate the 36th anniversary of the assassination of exiled opposition leader Gérard Hoarau, a memorial service was held at the Anse Royale Catholic Church to honour the man who is considered by many as a true Seychellois hero.

Gérard Hoarau (December 7, 1950 – November 29, 1985) was an exiled opposition leader and was head of the Mouvement Pour La Resistance (MPR) that sought the overthrow of the France Albert René regime which had come to power on June 5, 1977 in a coup d'état.

The opposition was based in London.

Hoarau was assassinated on November 29, 1985 by an unidentified gunman, on the doorstep of his home in Edgware, in North London.

Mr Hoarau, 34 then, was shot dead with a British military-issue Sterling sub-machinegun. His killer fired 11 times, striking Mr Hoarau with three bullets, according to the original investigation which was carried out by Scotland Yard’s counterterrorism unit.

The British police have never solved his murder, but it is claimed that the René government was highly implicated.

As well as the hired hit-man, British police also believed that there was another individual—believed to be a Seychellois—who knew Mr Hoarau and was able to identify him to the foreign assassin.

Neither Mr Hoarau's assassin nor his accomplice has ever been caught.

British police did arrest a number for tapping Mr Hoarau's telephone line, who were recommended to the Seychelles government by Ian Withers, who worked as a security adviser.

In 2018, a 77-year-old man was arrested at an address in Antrim on suspicion of conspiracy to murder in relation to the death of Mr Hoarau, and later released.

The arrest was carried out by officers from the Met's Counter Terrorism Command, with support from the Police Service of Northern Ireland (PSNI).

During the memorial service, led by Father Collin Underwood, close friends and acquaintances of the late Mr Hoarau shared testimonies and recounted his journey as a committed responsible opposition leader at a time when Seychellois who did not share the regime’s ideology were being targeted and had to endure various forms of victimisation, including disappearance, unlawful detention, death and forced exile.

In his sermon, Father Underwood highlighted that it is very important for a nation to know and accept its past, in order to move forward and progress.

He explained that it is also important to accept every aspect of the past, both positive and negative, while everything that happened in someone’s life greatly affected the person and also the family.

Father Underwood noted that refering to the 43 years under the previous regime is normal for those who endured through victimisation but should not be considered as an excuse by those with different ideologies.

He further noted that while thinking of moving forward, it is also important to think on the proper way to do so, while allowing justice to prevail in the process.

In her testimony, Juliana Betsy who was a close friend of Mr Hoarau said it is impossible to replace such a great wise man, while his enemies were so afraid of his intelligence and charisma, ordering his assassination, no matter what.

Mr Betsy added that Mr Hoarau’s vision, principles, ethics, dedication have been instilled in all those who followed and believed in him.

She added that she is very hopeful that justice regarding the case is closed, while those involved will be rightly punished.

Mr Hoarau was a very bright and highly educated young Seychellois with a degree in philosophy and theology from a prestigious Italian university. Consequently, he was fluent in Latin and Italian, as well as in English and French.

After independence he worked as special assistant to President James Mancham at State House, as head of the nascent foreign ministry.

He was also a great footballer and gained many caps for the Seychelles National Team.

Mr Hoarau opposed the creation of the one-party state and the decision by Albert Rene to close down all football clubs in Seychelles and plan the incarceration of all youngsters reaching the age of sixteen into political education camps for two years, which Mr Rene called the National Youth Service (NYS).

He was targeted by the new regime, while the targeting became more evident after the school children demonstration in October 1979 against the NYS.

In November 1979, Mr Hoarau and 100 others were arrested and held without charge or trial at the Union Vale prison, before being released nine months later, where he was placed under house arrest until he was forced to leave the country.

To keep up his legacy, the Gérard Hoarau Foundation will be officially launched today to spread the good values of life among the people of the country.

One of the testimonies (Photo: Louis Toussaint) 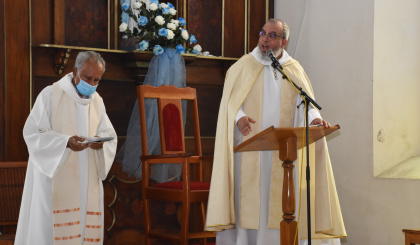 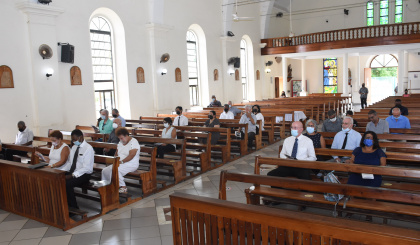