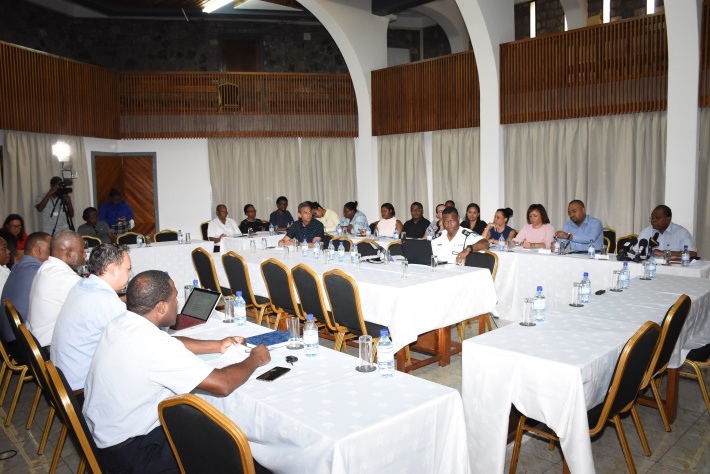 The multi-sectoral meeting in full swing

The overall total percentage of reported crimes against tourists for the second quarter of 2019, April to June, shows a decrease of 13% compared to the same quarter in 2018.

This fact was established yesterday during the routine tourism multi-sectoral meeting chaired by the Minister for Tourism, Civil Aviation, Ports and Marine Didier Dogley.

Also in attendance were the Minister for Environment, Climate Change and Energy Wallace Cosgrow, top government officials and representatives from the private sector, who were all gathered at the National House to discuss challenges affecting the tourism industry and decide on the way forward.

High on their agenda was the safety and security status of tourists visiting Seychelles.

According to statistics provided by the Police Statistic Bureau, the number of crimes directly affecting tourists between April and June 2019 had decreased to 59 compared to the same period last year where the crimes totaled 68 reported cases.

This makes a significant decrease of 13% in comparison to the second quarter of 2018.

Chief Superintendent François Songoire, deputy head of visible crimes, was quick to remark that the reduction in crime rates against tourists is a reflection of continued efforts and initiatives of the police force to raise awareness within the tourism industry.

“All commanders in stations across the country are collaborating and communicating with owners and managements of tourism establishment whereby they provide tips and advice in regards to security measures,” Chief Superintendent Songoire stated.

As a means to curb crimes against tourists, Chief Superintendent Songoire explained that police officers tend to target areas where crime trends are elevated such as in Anse Royale, Takamaka, Port Glaud and Beau Vallon.

These districts have the most frequented beaches on the island and hence record some of the highest crimes against tourists.

Philomena Hollanda, director of the risk management section at the tourism department, highlighted that the statistics provided by the police may not necessarily be indicative of the actual number of crime incidents against tourists, since the police are only aware of reported cases.

Unfortunately, Ms Hollanda noted, many crimes against tourists are not reported to the police.

“This is sometimes because the crime occurred a day before or on the day of the visitors’ departure from Seychelles or else there are tourism establishments that do not report crimes because they say that they have reported previous cases to the police and nothing have been done – either because the cases were not processed and brought to court or they did not receive feedbacks from the police. These are some of the things that deter them not to report break in and thefts.”

Nonetheless, the tourism department is working on an action plan along with the police force wherein they are undertaking one-on-one meetings with tourism establishments, particularly those on the smaller scale where most of the crimes are concentrated, to improve on their security measures.

The tourism department is advising tourism establishments and tourists to report any crime to the police.

“If cases are not reported we won’t have enough data to conduct comprehensive analysis and identify locations where crimes are prevalent. The police need these cases to be reported since they will have more data to work with when designing their crime prevention strategies,” Ms Hollanda added.

The multi-sectoral meeting also included discussions on noise pollutions and product diversification in the tourism industry.