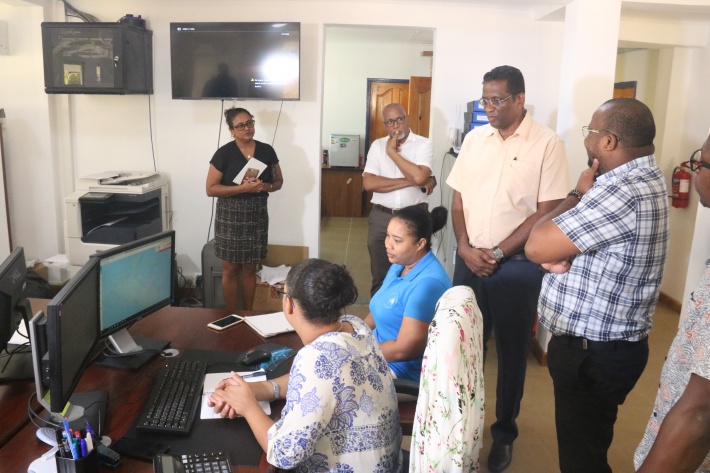 Minister Bastienne interacting with staff during his visit at the SFA

Following the launch of the new three-year fisheries comprehensive plan last weekend, the Minister for Fisheries and Agriculture Charles Bastienne conducted a visit to the Seychelles Fisheries Authority (SFA) yesterday where he interacted with employees and the management team to discuss the implementation of the plan.

Minister Bastienne was greeted by chief fisheries officer Vincent Lucas and human resources officer Gelage Hoareau, who guided him on a tour of the premises and the facilities available at SFA.

He visited the License and Registration Department, accounts, procurement, human resource as well as the fisheries monitoring centre and interacted with the heads of each department regarding the nature of their work, the challenges that they are faced with, as well as the future plans of the respective departments in relation to the new comprehensive plan.

Minister Bastienne also visited the research facilities, value-added plant, ice-plant for fishermen and laboratory where scientific tests are conducted for stock assessments and the statistics department in which data is collected about artisanal and semi-industrial fishing activities.

As he interacted with employees from the numerous departments, Minister Bastienne suggested that more staff is needed to discharge SFA’s new functions as stipulated under the comprehensive plan.

He also informed them about the court cases for 6 foreign-owned vessels intercepted for illegal fishing in Seychelles’ territorial waters. As the comprehensive plan makes provision for vessels caught fishing illegally to be destroyed, Minister Bastienne advised the employees to start procedures to destroy vessels in cases in which the courts have already delivered their verdicts.

On his tour of the laboratory services, Rodney Govinden, an SFA employee involved in research, informed Minister Bastienne of the challenges that SFA faces when carrying out research including space constraints and the lack of proper chemical disposal facilities.

Mr Govinden also noted that new equipment is necessary to bring the lab up to par with international standards.

As for the fuel depot which supplies fuel to fishermen, the fuel attendants noted that the operating hours should be reverted from 7am to 1pm to 8am to 2pm as it was before since the demand is higher at around 9am and hours later during the day.

Minister Bastienne was also informed that the capacity of the fuel depot, which stands at 24,000 litres (one 14,000 litre tank and a 10,000 litre tank) is insufficient to supply fishermen on account of the significant increase in fishing activities in recent years.

Following a tour of the facilities, Minister Bastienne joined the management team for a meeting in which they addressed his queries and SFA’s duties and responsibilities under the new plan.

“What we are doing now, it is important for us to visit SFA and interact with the staff and discuss with them the execution of the plan. The key for materialising the plan, an important element is SFA and my objective today was to meet with management and staff, find out about their working conditions, the challenges they are faced with and following this, as I meet with senior staff, together with the board in 2 to 3 weeks from now, we will know how to work on implementation,” the minister said.

“We know we have set out some ambitious plans with specific targets that we need to meet as per the plan and we know and need to ensure that SFA has all the resources necessary to deliver on the plan,” Minister Bastienne stated.

Referring to the shortcomings that SFA faces in discharging its functions effectively, Minister Bastienne noted that the work environment at SFA needs some slight improvements but that he is confident that the authority can carry out the requirements of the comprehensive plan satisfactorily.

“There is also the element of how many staff the SFA needs to discharge functions stipulated in the plan. We are placing emphasis on monitoring and surveillance and based on my interactions with staff, there are certain deficiencies including shortage of personnel and equipment,” the minister said.

He noted however that SFA can through more advanced training develop the capacity of its 195 employees and can also recruit more personnel in time especially for monitoring and surveillance purposes.

“The plan is a three-year plan but the work starts from today,” Minister Bastienne concluded. 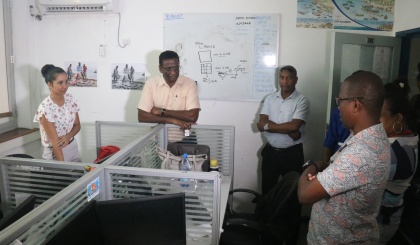