Mr Vel guiding the students on a tour of the mangrove forest (Photo: Patrick Joubert)

Students from the International School Seychelles (ISS) are now in a better position to view and enjoy the Mont Fleuri wetland as an attraction, and also for teaching and learning, now that the school has built an access boardwalk along its border to the wetland.

The boardwalk is part of the school’s eco-club project for mangrove regeneration in the wetland. It was funded by the Seychelles Conservation and Climate Adaptation Trust (SeyCCAT), through the Blue economy grant.

Work on the boardwalk took place during the lockdown at low tide.

It was environmentalist Terrence Vel from the University of Seychelles (UniSey) who had the honour to open the boardwalk yesterday morning in the presence of ISS principal Elodie Vallantine, the school’s environmental leader, Sue Ansell, teachers and students.

The mangrove regeneration project by the school started in March 2020 under the guidance of Mr Vel. The boardwalk has given the school great access to the wetland and now the students can continue with their regeneration project by collecting seeds to grow in the nursery, before being transferred into the marsh, and to also, safeguard and keep it free from rubbish for the protection of wildlife species in the area.

Mr Vel said that he was very impressed with the mangrove regeneration done by the school’s eco-club.

He added that the school had adapted well with the system to propagate mangroves from one area to another area by taking plants from the nursery to be planted as compared to the past when actual trees in the wetlands were uprooted to be planted in another area.

He further said that the regeneration is important for the atmosphere and also acts as a nursery for the land and marine species.

“I am very proud of what you have achieved so far to regenerate an area that has been degraded by development. Now you will have all the wildlife coming here and it will be very good for you as you will be able to learn about the eco-system and function of a mangrove forest,” said Mr Vel, who noted that the whole coastline areas from Anse Etoile to the airport was thick with mangroves, with many crocodiles inside, that prevented the first settlers from disembarking on Mahé and to settle on St Anne instead, until later when access was made possible.

Mrs Ansell said that by planting the endemic trees along the coastline, the students, who all enjoyed working in the mud, are, apart from removing the rubbish, also getting rid of invasive plants in the area.

“We have future plans for local and community participation in the wetland project and other local schools have expressed the desire to come along to help us once the Covid-19 restrictions are over and they are greatly welcome,” Mrs Ansell said.

Since the regeneration project started, the students have planted many ‘Mangliye Rouz’ in the wetland area bordering the school and all is growing fine. On November 15, 2021, they planted around 50 of those plants in the area. Staff from the Ephelia hotel are also helping the school with its regeneration project and last year they planted mangroves on the opposite bank facing the highway which are also growing in size.

Apart from continuing with the regeneration of the mangrove, the next project by the eco-club is to work on a wetland mural that will help identify the wildlife in the area. 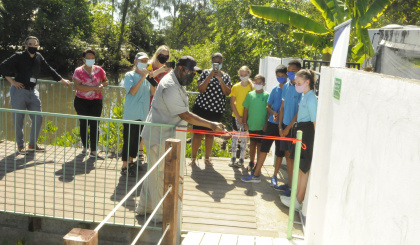 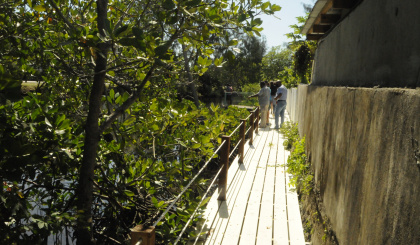 The boardwalk is expected to enhance the students’ enjoyment of the mangrove forest (Photo: Louis Toussaint