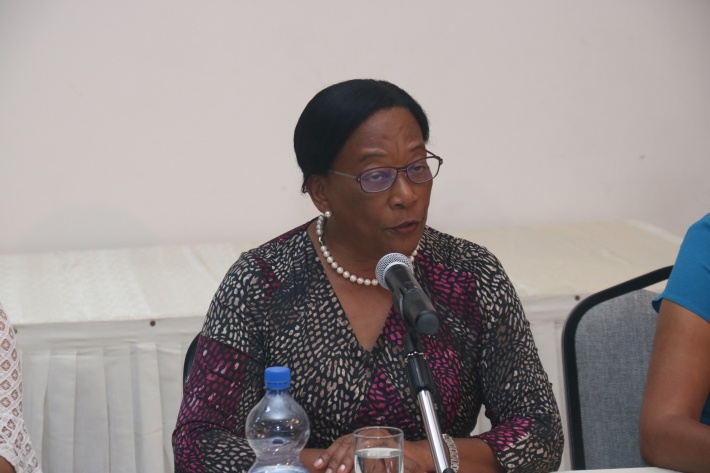 Minister Simeon addressing the parents during the meeting yesterday

The Ministry of Education and Human Resource Development met parents of pupils from La Rosière primary school in a meeting yesterday at the STC conference room.

The meeting comes after the ministry’s decision to close the primary school due to structural defects and to relocate students and staff to Belonie secondary school.

Two different assessments were conducted at La Rosière school last week and upon completion of the assessment, together with another assessment by an independent contractor, the ministry took the decision to close the school due to various structural defects such as cracks in the building.

The aim of the meeting was to inform parents about the various changes that will be taking place throughout the month leading up to the start of the new term in September.

“The ministry of education tried its best to find a suitable option to relocate the primary school pupils but it felt that moving them to schools like Glacis or Bel Ombre will be especially difficult on the younger pupils, so we opted to move them to a location that is nearer to their old school,” said the minister

In total 500 plus kids will be moving to Belonie secondary school where they will be using the classes of the secondary students who have been relocated to the Nisti headquarters at Bel Ombre.

The minister noted that the reason they are moving the secondary students to Bel Ombre is because they are more mature to handle the half hour trip to their temporary school.

“Renovation for the school has been in the works for a while but the funding was not available, but the planning authority has approved the final plan for renovation works which will be funded by the Kuwaiti Fund,” said Ms Simeon.

She added that the renovation will take about one to two years to be completed.

Minister Simeon noted that the cracks along the building have been present for years but the ministry felt that they did not pose any danger and so they did nothing about it.

But most parents were worried about how the move will affect their children especially those that will be sitting for the national exams in October.

Minister Simeon assured everyone present that the move will not affect their children as they will be moving with their teachers and classes will be conducted like any other day.

She asked for the cooperation of all parents and urged them to keep a positive mind set as the ministry will be by their side and will keep them informed on the renovation process and progress.