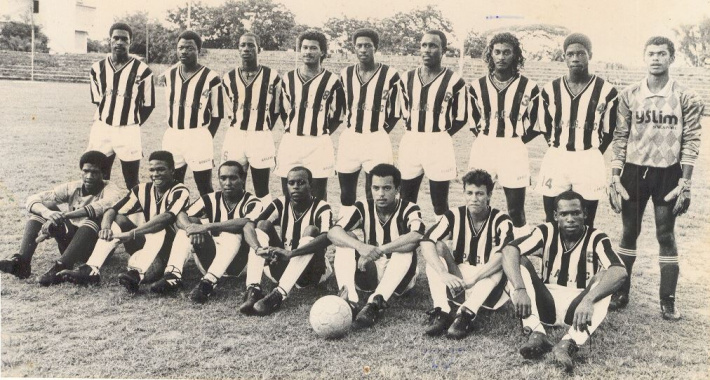 Former midfield workhorse Alva Woodcock has passed away in Montreal, Canada, where he had being living since 1993.

Affectionately known as Jahore, Woodcock started his football career with Mont Buxton during the time when sports here was run on a regionalisation system.  With his younger brother Jude Woodcock also on the team, Woodcock played his heart out in every game and developped into a talented defensive midfielder. He eventually became Mont Buxton’s (MBU) workhorse as he was the team’s never-say-die player who helped drive them to victory.

It was no surprise that Woodcock was recruited by the mighty St Louis in the late 1980s. He quickly slotted into the St Louis midfield alongside players like Vincent ‘Tolor’ Dorasamy, Robin Mousbé, Wills Agathine, Paul Khan and others, providing the right ammunition for strikers like Bernard Dorasamy, Jude Mohideen and Willis Dufresne.

The hard-tackling, no-nonsense midfielder was renowned for patrolling the area in front of the St Louis back four made up of Alex Labiche, Marc Mathiot, Nigel Hertel and Robert Morel. He won a number of titles with St Louis and also played for them in the old African Cup of Champions Clubs competition.

His last visit to Seychelles was in 2019. He arrived on Christmas Day 2019 and left for Canada in late January 2020. He was supposed to visit Seychelles again this year.

“Alva left us after a short illness. He has run his race,” his brother Jude Woodcock told Sports NATION yesterday.

Jude Woodcock was himself a very good player, leaving MBU to join St Michel with the return of club football and he too recorded a lot of success with the Anse Aux Pins-based team. He also played for the Seychelles national team.

Sports NATION sends its condolences to Alva Woodcock’s two sons, brothers and the rest of the family.