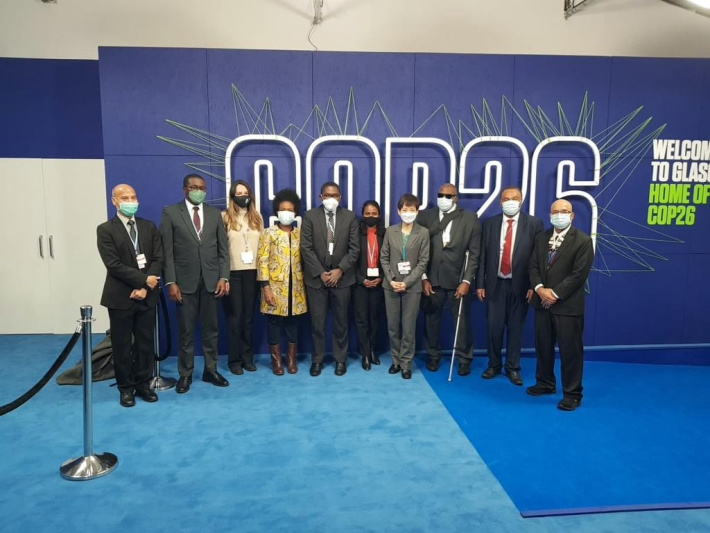 Seychelles is not satisfied with the outcomes of the COP26 conference in Glasgow earlier this month, as the world’s largest carbon emitters’ fell short of committing to 1.5 degree Celsius target.

Minister for Agriculture, Climate change and Environment Flavien Joubert, who attended the conference alongside a delegation from Seychelles and President Wavel Ramkalawan, explained in a press update yesterday morning that the Alliance of Small Island States (Aosis) sought to push for the largest carbon emitters to commit fully to the global target, and in support of small island states who stand to lose all to climate change in the foreseeable future.

“When it comes to the outcomes of the conference, the Seychelles and also other small island states that form part of Aosis are not 100 percent happy. We are quite disappointed in some instances, because, the ambitions which were communicated at the very beginning were not carried through to the end, and we realise that the amount of progress that we made in the past few years should have been much more, and we would like to see a lot more commitment and action, especially by big emitters,” Minister Joubert said.

“We have seen some declarations that point in the right direction, for example in relation to forests, on coal, on subsidies for fossil fuels, on financing, and on loss and damage, but despite the fact that they are pointing in the right direction, the amount of commitment under the declarations are not sufficient, and we are not happy with the way they have been presented. Very importantly for us, the commitments that were presented with the different reports will not lead us to attaining this 1.5 degree target. We do not think we would reach the target with the low level of commitment from the big emitters, and this is a major concern that was presented by Aosis, and this is a point that we would like to push very hard on, in preparation for COP27 in Egypt next year. We would like to see a serious commitment in 2022 by all countries to get back on track so we can actually reach the 1.5 degree target. This is very important for us and other low-lying islands, who are bearing the brunt of climate change and stand to lose a lot. Some stand to lose their entire country, if this commitment is not met,” Minister Joubert stated.

The minister and delegation comprising principal secretary for climate change Rebecca Loustau-Lalanne, Wills Agricole, and Financial Surveillance Analyst at the Central Bank of Seychelles (CBS) Cyril Benoiton among others, attended the conference with other leaders and heads of state with three main objectives, some of which came to fruition.

Mr Agricole was tasked with the role of leading a three-strong team in negotiations.

Over the course of the event, the delegates communicated the ambition of Seychelles, as presented in the National Determined Contribution (NDC) plan.

Seychelles also managed to secure assistance for climate adaptation, through bilateral discussions with different partners in a position to provide support, whether financial or technical.

“We were able to successfully get onboard quite a few of them, especially the most important ones like the Commonwealth Adaptation Fund and the NEC Initiative Partnership. In all the discussions we had, we were positive that we would get results from the discussions,” Minister Joubert added.

Based on discussion with the Food and Agriculture Organisation (FAO), a mission from FAO is expected to arrive in Seychelles soon, to discuss in more details with the local partners how to support the local farming community to adapt to climate change.

In moving forward, the ministry would like support for farmers and climate smart solutions, and training and capacity building from local agriculturalists.

The Commonwealth will also be assisting Seychelles with a Climate Financial Advisor.

As a member of the Aosis, Seychelles made its voice heard through the alliance, with Minister Joubert taking on the task of leading a sub-group of the alliance, who presented the position of the group to the presidency, the United Kingdom (UK) on several occasions, and directly with the United Nations secretary general Antonio Guterres.

Similarly, Mr Agricole shared similar sentiments in saying that small islands, the primary victims of climate change at the expense of large industrial nations, are disappointed.

“We are a bit disappointed in that something which is really important to us called ‘Lost and Damaged’, we had requested climate change support separate from financing we get globally and we didn’t get this. What is important is that ‘Lost and Damage’ is on the table for the next COP in Egypt,” Mr Agricole said.

“Between now and next year we need to push hard to ensure that this support facility exists. Seychelles is already experiencing extreme weather change and we as small island states are saying that we need to be compensated by countries that cause climate change, industrial and rich countries, but they are reluctant to deliver on the demand, which is why the fight continues. We are fighting for our survival,” Mr Agricole added.

Securing lost and damage financing allows authorities and governments to adapt and transform the national economy, adjust the way the population performs, to reduce emissions, transition to renewable energy, and other gradual changes that need to be accounted for. This also required a global commitment.

One commitment made by Seychelles in the nationally determined contribution is to protect seagrass meadows and mangroves, as they play a great role in absorbing carbon dioxide from the atmosphere.

Mr Benoiton noted that CBS was represented at the event for the first time this year, after last year commencing work to determine how climate change impacts on finance and the financial sector.

The CBS and Ministry of Finance, Economic Planning and Trade are also key partners in discussing and implementing policies towards the transformation.

The accompanying photos show some highlights of Minister Joubert and his delegation at the COP26. 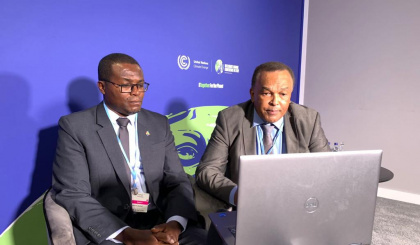 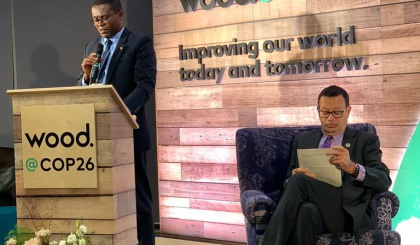