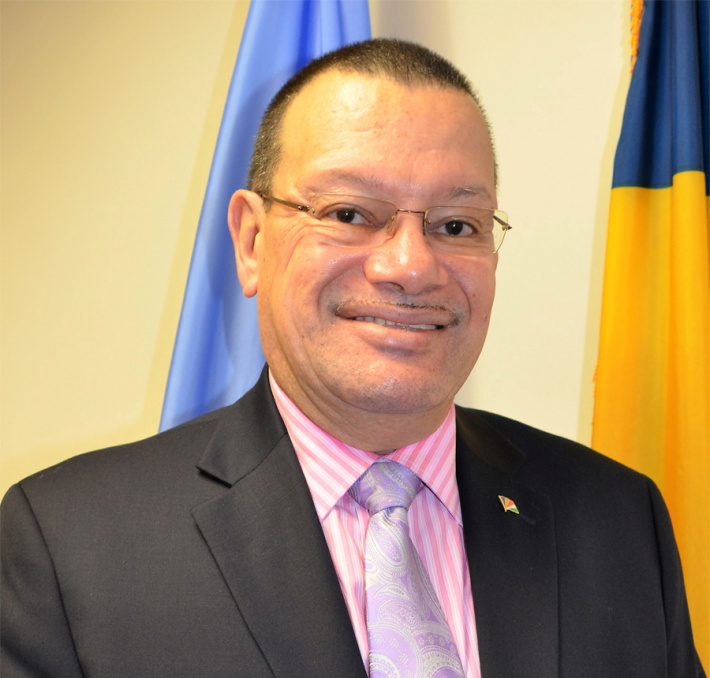 Seychellois Ronald Jumeau, Ambassador and former permanent representative of the Republic of the Seychelles to the United Nations and chair of the Sids Dock executive council, has been appointed the SIDS DOCK roving ambassador for oceans.]

It was Dr Pohiva Tu’i’onetoa, Prime Minister of the Kingdom of Tonga, in his capacity as president of the Sids Dock Assembly, who made this announcement during his virtual keynote address on November 11 2021, at the SIDS DOCK side event in the margins of the 26th United Nations (UN) Climate Change Conference of the Parties 2021 (COP26) on the Call To Action! for the Establishment of the Global Ocean Energy Alliance (GOEA), held at Wood House, in Glasgow, Scotland.

“Ambassador Jumeau is well-suited as our Oceans Ambassador, as he has intimate knowledge of how important ocean energy is to our island states and coastal cities. His outstanding body of work has revolutionised our understanding of what it takes to build small island developing states’ (Sids) resilience to climate change in a unique way, having contributed significantly to the protection and preservation of the Seychelles islands,” Prime Minister Tu’i’onetoa, said.

Women are projected to benefit significantly from an ocean energy industry, and the prime minister said he is confident that Ambassador Jumeau will ensure their full participation. As the recipient of the 2018 Island Women Open Network (IWON) Excellency in Leadership Award, Ambassador Jumeau is referred to as the “Ocean Whisperer from the Seychelles,” for being a magnet for collaboration, and for helping to create unlimited space for women through the Sids Dock IWON, and enshrining women’s participation in the organisation, the Prime Minister noted.

As the Sids Dock Roving Ambassador for Oceans, Ambassador Jumeau will help promote the GOEA, and champion the initiative which is focused on accelerating the development of ocean energy projects through partnerships that mobilise technical, human and financial resources and aims to establish a global community of vested interest with the capacity to develop a pipeline of bankable ocean energy projects to serve islands, cities and coastal nations. He will also represent the IWON and support its public relations campaign to “Bring Home Dominique,” the first Ocean Thermal Energy Conversation (OTEC) plant.

The Sids Dock COP26 Side Event on Ocean Energy, chaired by Ambassador Jumeau, was a Call To Action! from heads of state and government from small island developing states (Sids), Coastal Cities, and Least Developed Countries (LDCs) for the establishment of the Global Ocean Energy Alliance (GOEA). Sids Dock and its partners the United Nations Industrial Development Organisation (Unido) and the Stimson Center Alliance for a Climate Resilience Earth (ACRE), will cooperate to establish the GOEA, mobilise resources, facilitate partnerships with the private sector aimed at the effective transfer of ocean energy knowledge, technology and investments, and to put the appropriate institutional framework in place for an Ocean Energy Industry.

Sids need to replace some ten thousand (10,000) megawatts of fossil fuel-powered electricity generating plants, over the coming decades, plants which consume more than US $5 billion dollars’ worth of fuel, annually. Ten thousand megawatts represent the vast majority of existing generating capacity in the Sids. However, because the majority of these plants have reached or exceeded their economic life and are no longer efficient users of fuel, Sids must ensure collective action is taken to replace these generators with Ocean Energy Systems. Ocean energy development is critical to meeting the sustainable development goals (SDGs) for small island developing states and is the foundation for the blue economy that will help make Sids more resilient, and increase Sids’ ability to build back better, but assistance from development partners is necessary.”

Sids Dock hailed Ambassador Jumeau as a “leading authority in climate resilience and negotiations and someone who has a deep understanding of development policy.” Ambassador Jumeau has over 30 years of experience in the multi-disciplinary field that includes finance, especially green bonds, which Seychelles pioneered; technology, where under his chairmanship of the executive council of Sids Dock, “Biorock,” that can help regenerate coral reefs is being introduced in several pilot countries; and the environment, where he is overseeing the development of the largest SIDS DOCK programme, the Blue Guardians, that focuses on nature-based solutions for climate resilience in Sids and coastal cities. As the former Climate Change Ambassador for Seychelles, the role of Oceans Ambassador will be familiar to Ambassador Jumeau.

Sids Dock is a United Nations (UN)-recognised international organisation established in 2015, with all the rights and privileges for addressing climate change, resilience, and energy security in small islands.

Sids Dock represents 32 small islands and low-lying developing states across the globe, and is so named because it is designed as a “DOCKing station,” to connect the energy sector in Sids with the global markets for finance and sustainable energy technologies. The organisation’s work is coordinated by the secretariat, in Belmopan, Belize.