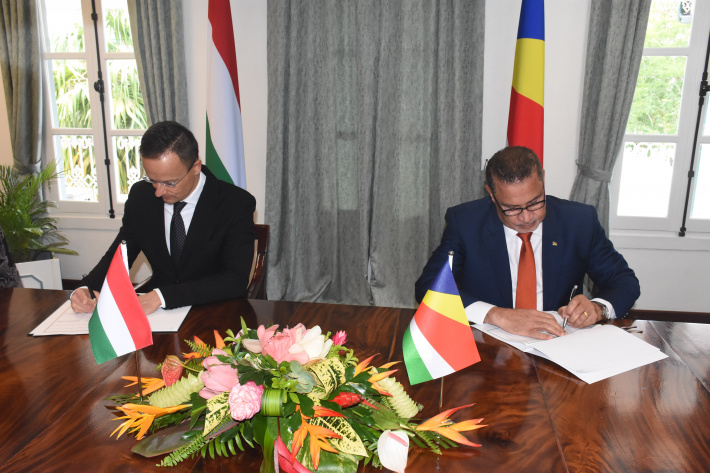 Signing of the MoUs

The Minister for Foreign Affairs and Trade of Hungary, Péter Szijjártó, accompanied by a delegation, was on a one-day official visit to Seychelles yesterday.

His visit followed one made by our Minister for Foreign Affairs and Tourism, Sylvestre Radegonde, to Budapest in July this year.

During the visit, there was a tête-à-tête and a bilateral meeting with Minister Radegonde at Botanical House. Besides the minister, the Seychelles delegation comprised Ambassador Vivianne Fock Tave, principal secretary for Foreign Affairs; Sherin Francis, principal secretary for Tourism; Lindy Ernesta, director general Bilateral Affairs Division and Ryan Adeline, Desk Officer for Hungary.

The other members of the Hungarian delegation comprised Zsolt Mészáros, Ambassador of Hungary to the Republic of Seychelles and László Váradi, Deputy State Secretary for Development of Southern Relations of the Ministry of Foreign Affairs and Trade.

This was followed by an exchange of gifts between Minister Radegonde and Minister Szijjártó.

The delegation then headed to the Maison Quéau de Quinssy for the signing of two memoranda of understanding (MoU) on Regular Consultations and Tourism Cooperation.

In a meeting with the press, Minister Radegonde thanked Minister Szijjártó for accepting his invitation to visit the Seychelles soon after his visit to Hungary in July.

“These visits represent steady progress and strengthening of the relationship between Hungary and Seychelles. We both had very candid and open discussion on various issues of cooperation and issues of mutual interests.”

Minister Szijjártó remarked that “this visit is quite symbolic as I am the first Hungarian Foreign Minister to visit Seychelles officially. This is a good occasion to show the respect to your country who is celebrating its 45th independence anniversary. It was only one year after you gained independence that we started our bilateral relationship. We do recognise the important role of the Seychelles when it comes to maritime security in the region. When it comes to the fight against piracy and blocking the routes of drug trafficking by Seychelles – both of these efforts have been contributing to the security of this region. This is why we have been encouraging for the EU to invest in these efforts.”

Minister Szijjártó also shared that during the meeting yesterday, both countries have signed three agreements. “First there will be a Hungarian company who will invest in a cybersecurity firm in Seychelles with the support of the Hungarian government to the tune of US $17 million. The second support will be in terms of capacity building in the health sector where there will be cooperation between the biggest universities of Hungary and the Ministry of Health. Through the scholarship programme, we will also carry out training for the Seychellois doctors and medical staff. The third agreement is on the effort to counter illegal trafficking of drugs. In order to help Seychelles in this fight, we agreed to train some Seychellois in our institutions and the first training will take place in December. I like to also underline that Seychelles had a successful vaccination campaign and Seychelles is considered a safe country just like Hungary. We recognise the vaccines and the Hungarians and Seychellois will be free to travel for visits.”

Scholarships received from the Government of Hungary: “In a MoU signed in 2020, the government of Seychelles received 10 scholarships from Hungary, and already two students are studying there and we hope that others will follow. I have to make it clear that in the current situation receiving scholarships is not easy and I would urge the students to take every opportunity they get as the government of Seychelles cannot afford to support each scholarship. We already have 10 fully funded students in medicine studying in Hungary. We need to make full use of the scholarships. This business of choosing will have to stop and we need to do better. ”

Health sector: Both countries have discussed the possibility of having short-term exchange programmes from the medical university in Hungary and vice-versa. “In December, a team from the Ministry of Health led by its principal secretary will be going to Hungary with the aim of learning from the Hungarian experience in dealing with substance abuse and rehabilitation of drug users.”

Tourism: We have agreed on the mutual recognition of vaccines. We have explored different avenues and the MoU we just signed will allow us to learn from each other in this sector.

Minister Radegonde noted that Hungary is part of the European Union and we are grateful for the help provided to Seychelles such as the extension of Port Victoria.

Minister Szijjártó also added that the US $17 million is a credit line that the Hungarian bank has provided for the Hungarians to either do export/import business, forming joint ventures between companies and third to get tenders on firm market.

Other topics of cooperation discussed were in agriculture, investment, among other issues.

Minister Szijjártó also had the opportunity to meet President Wavel Ramkalawan and other ministers before leaving late yesterday evening. 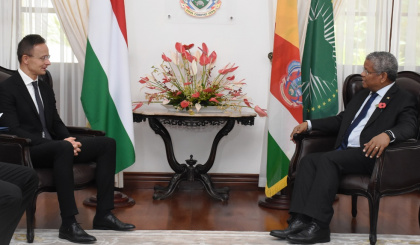 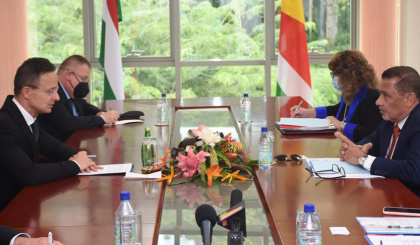 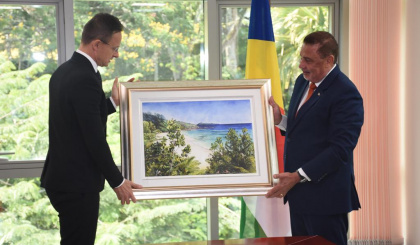 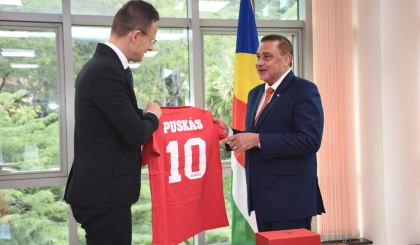 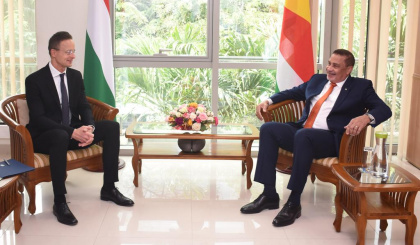