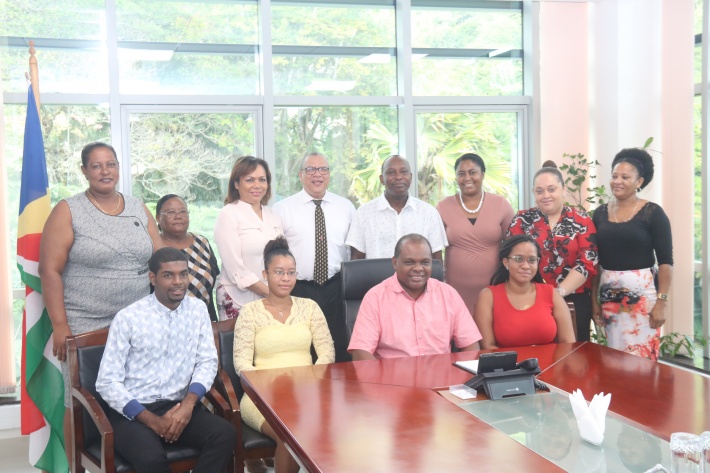 The students (seated) in a souvenir photograph with Minister Dogley, PS Lafortune, Mr Joubert and their mothers at the end of the meeting

The Minister for Tourism, Civil Aviation, Ports and Marine Didier Dogley yesterday met three students from the Seychelles Tourism Academy (STA) who will be proceeding on overseas study this year.

The students, namely Anil Esparon, Emmiliana Victor and Estelle Loze, are among five best performers of the graduating cohort 2018 who have been awarded full scholarships by the Seychelles government.

The students accompanied by the principal of STA, Flavien Joubert, and other officials from the organisation as well as their mothers, were greeted by Minister Dogley and principal secretary for tourism Anne Lafortune at Botanical House.

Addressing them, Minister Dogley stated that “in life, everybody must have a marketable skill” and that it is up to each individual to broaden their knowledge and to work hard to perfect their chosen craft.

He wished them the best of luck and commended the students, especially Estelle, a student from the housekeeping department, stating that with hard work, dedication and the right attitude come many opportunities.

The students also took turns to thank Minister Dogley for his continued support as well as the staff of STA and the government of Seychelles, who have all contributed towards their achievements.

Anil Esparon is a Food Preparations and Culinary Arts graduate at Advanced certificate Level and also the winner of the President’s Cup 2018. He has been accepted at the Quest University, Malaysia to study for a Diploma in Culinary Arts. The training will last three years.

“I am very proud of myself and I am proud to be representing STA and Seychelles in Malaysia. My passion for culinary arts developed from a young age and the first thing I remember cooking was fried rice which is why I love Asian cooking. I am hardworking and like a challenge so I am looking forward to embarking on this next step in my life,” Anil stated.

Emmiliana Victor is also a Food Preparation and Culinary Arts graduate at Advanced Certificate Level (Apprenticeship) and also the winner of the Minister’s Award 2018 at Certificate Level. She has been accepted to pursue a Diploma in Hospitality Management at INTI University and Colleges in Malaysia.

Estelle is a 26-year-old mature student and mother to a little boy. She noted that she was apprehensive about returning to education as a mature student but with the support of her mother, has managed to complete her studies successfully.

“When I saw the graduation ceremony for the 2017 cohort I decided to go for it and told myself that I would be the next Minister’s Award recipient. I would eventually like to become an executive chef as that is my dream,” Estelle said.

The third student, Estelle Loze is an Accommodation Operations and Services graduate in the Housekeeping section at Certificate Level (apprenticeship) and she too has been accepted to study a Diploma in Hospitality Management at the INTI University and Colleges Malaysia.

“It was not an easy road to get here. There were times I wanted to even drop out of the course but I am glad I made it through. The exams were especially hard but I managed to pass all of them. When I come back I want to progress on to other more superior posts. I am determined and I will be successful,” she said.

The students are set to leave for their respective universities in October.