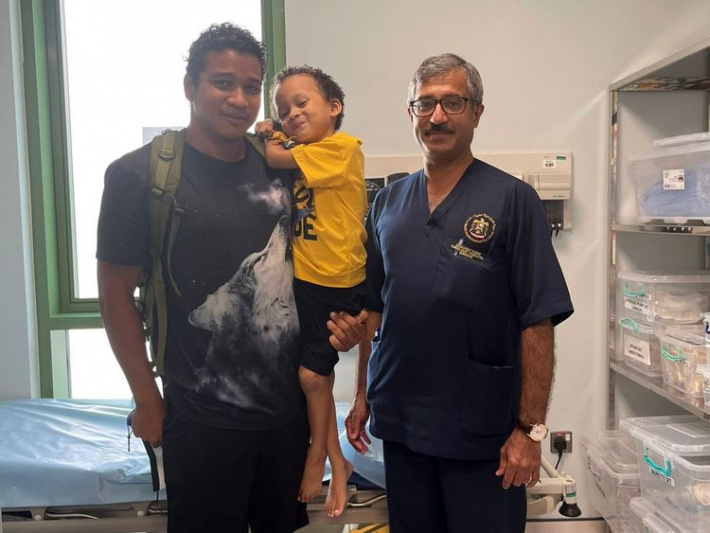 Dimitry Hoareau, a four-year-old Seychellois boy who was suffering from a severe congenital blockage in his left kidney, has had his kidney saved by doctors in the United Arab Emirates.

A paediatric surgeon at Shaikh Khalifa Medical City, Ajman (SKMCA) successfully conducted the complex surgery to save the kidney of young Dimitry.

According to Gulf News, the blockage resulted in urine retention and brought down kidney function to just 20 per cent. Had the condition continued, Dimitry would have lost his kidney.

Dimitry’s parents, Gino Hoareau and Sharon Bekker, were desperate to help their son whose stomach was getting bloated as his kidney had blocked out and was unable to empty out the urine input.

They searched the internet for a suitable surgeon. Hoareau told Gulf News: “My wife often came to Dubai on work and had seen the hospitals here. She was convinced we would find a good surgeon here, and we did.”

Dr Haider, who also conducts urological surgeries, said: “The parents wrote to us and after preliminary discussions over the phone and email, we were able to understand the problem.”

Although the kidney was filtering the urine, it was unable to pass it to the ureter as the tube was narrowed down with practically no open outlet to the ureter. As a result, the kidney had grown big in size, extending from his left upper abdomen to well below his belly button. It measured 11.5cm x 5cm in size, the doctor said.

It was his swollen abdomen that initially alerted the parents.

Three days prior to the surgery, in the first week of October, the parents flew in from Seychelles with Dmitry. On October 8, Dr Haider along with Dr Ross Knight and Dr Hisham Abou Ghosiba were able to unblock the kidney, snip away the obstruction, and reconstruct a conduit to the ureter using a ‘Double J’ stent.

With the passage cleared, the urine passed unhindered to the ureter and urinary bladder. The little boy’s left kidney function was restored to a substantial extent, said Dr Haider.

Dimitry’s father said: “Apart from the swelling in the sutures, within a few days my son was hearty and playing. Prior to the surgery, he was bloated, lethargic and in pain. He was unable to play with other children or be normal. After this surgery he was bright and chirpy and active. My wife and I are thrilled with the results and will return to the UAE in January 2022 to have the stent removed, as by then his natural passage would have healed.”

Dr Haider said: “Once the natural tissue builds around the reconstructed conduit, we will be able to slip out the stent with the help of a small camera and without making any cuts. The child may not have his full kidney function restored but we are hoping that the swelling will be able to do its filtration job to a substantial extent.”