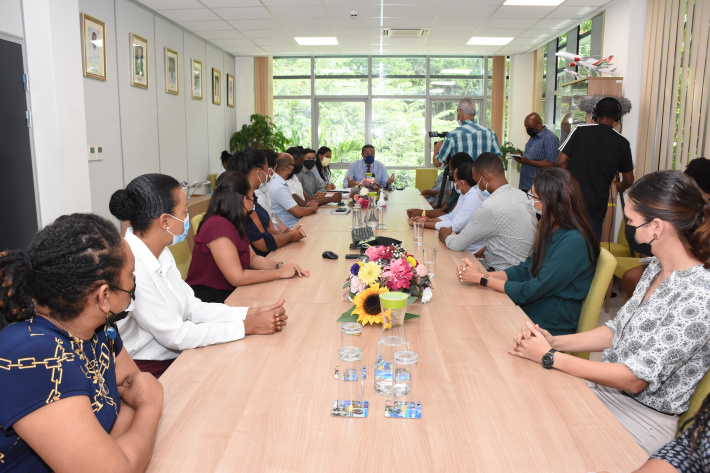 As part of his familiarisation with the industry and all its stakeholders, the Minister for Foreign Affairs and Tourism, Sylvestre Radegonde, yesterday met with some former students who have completed their Bachelor’s Degree in hospitality management at the Shannon College, a partner of the National University of Ireland.

Apart from congratulating them for successfully completing their degree, the aim of the meeting which took place at the Ministry of Tourism headquarters, Botanical House, was for the minister to hear from them about their challenges and ideas vis-à-vis the tourism industry and also if the Shannon programme is worthy or has to be modified or scrapped.

It was also for him to discuss with them on the succession plan issues in their areas of work, to find out the reason why 50% among them have left the hotel industry and to encourage those still the industry to stay on the job.

In all, ninety students from six different cohorts have graduated from Shannon College since the first intake in 2008. Only about 50% of the graduates are still working in the hotel industry while some have left to work in other sectors and others to do their own businesses.

Due to health measures with regard to the pandemic, only some twenty of them from the different cohorts attended the meeting yesterday which also saw the presence of the principal secretary for Tourism, Sherin Francis.

Addressing the graduates, Minister Radegonde explained that the main purpose of the Shannon College programme was to have Seychellois taking up key management positions in hotels. Although not blaming some of the graduates for leaving the industry out of frustration, he added that it was not fair after so much investment by government to see so many of them not working in the industry.

The former graduates were all in favour of the Shannon programme which they said has moulded them into what they are today, in terms of the jobs they are doing, be it in the hotel, other sectors or as self-employed.

However, they felt that they are not being recognised for their achievements and that the foreign workers are being favoured over them.

They also said that the succession plan is not being followed and instead Gainful Occupation Permits (GOP) are being issued to foreign workers and all of that has contributed to them leaving the hotel industry.

Some among them told the minister they are even considering leaving the industry because of the issue. They blame the affiliated ministries in the past administration for not following up on the two-year mentorship programme for their succession honoured by the hotels.

Those who left the industry said while their certificates are not recognised by the hotel management, they were also purposefully made to feel frustrated so that they get to lose interest and leave.

Among some suggestions to them to address the succession plan issue honoured by the hotels, the minister proposed that his ministry will relook at the mentoring committee and its terms of reference and also to update the list of graduates still on the job and to follow through on their progression in relation to the succession plan.

He explained that the ministry will work closely with the employment department to see that the succession plan is honoured and that no GOP is issued at middle and upper management level where a Seychelles have been in an understudy position.

Minister Radegonde is expected to meet with two other groups of former Shannon College graduates.