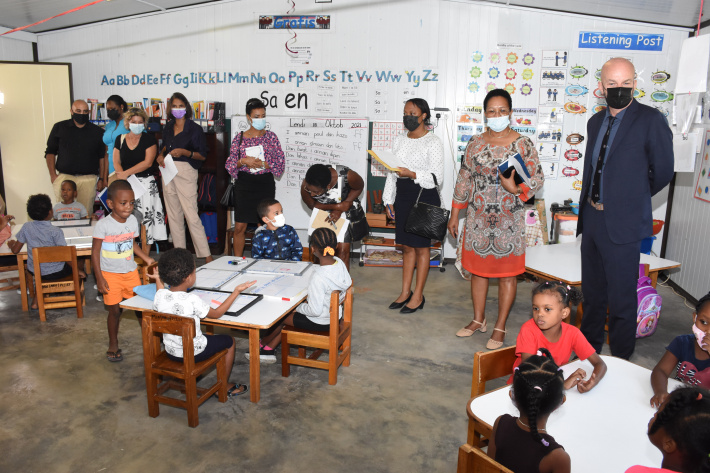 Mr Consigny and his delegation during their visit yesterday (Photo: Louis Toussaint)

The Anse Boileau primary and secondary schools yesterday welcomed a delegation from L’École Française des Seychelles (EFS), led by director Christophe Consigny, along with senior staff from the Ministry of Education.

Yesterday’s visits followed that of Minister for Education, Dr Justin Valentin, in September at the EFS, and it is part of a programme of discussions in line with the ultimate vision of the Ministry of Education to establish partnerships in an effort to revitalise the education environment.

The exchange is also to strengthen the relationship between private and public schools.

During the visits, various areas of bilateral exchanges and co-operation between the schools were identified.

Ms Labiche said the visit was the perfect opportunity for both parties to learn about what goes on at each other’s school, creating a perfect understanding, thus paving a better path towards exchanges which will boost the learning of French at her school.

On behalf of the EFS, Mr Consigny said since the school is a foreign school, it is therefore important to be acquainted to the territory on which it is planted and also share its way of doing things.

He explained that the activity is also aimed at sharing universal pedagogical principles, while not being enclosed in the French way of doing things, but also to remain open to the environment in which they are based.

In terms of exchanges, Mr Consigny said it can all begin with small common projects, as well as traditional activities, including sports, while joint projects between the two schools can also be set to compare the outcome of the two different ways of work, based on the progression and results of the children.

Mr Consigny also noted that the most important part of the exchange programme should focus on the interactions of the students since they are at the centre of the programme.