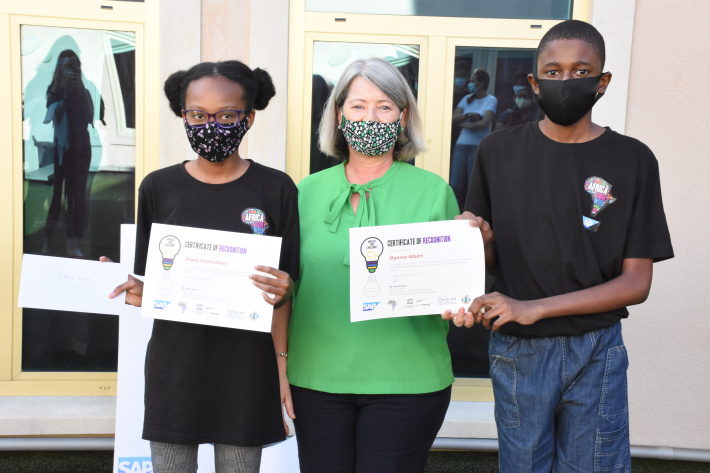 The second prize of the competition went to Anand Narayan from Mont Fleuri secondary school while the team of Gabriel Suzette, Dylan Francourt, Riah Aglae, Mariah Meme and Eva Lawen from the Anse Boileau secondary school clinched the third prize.

The works of the three groups of winners representing our country are being judged among other winners of the Africa Code Week Challenge on the African continent.

It was the newly accredited Irish ambassador to Seychelles, Mary O’Neill, who presented Commetant and Albert with their prize in a small ceremony held on Friday afternoon at the Division of Science, Technology and Innovation, Oliaji Trade Centre, Victoria.

The second and third placed winners received their prizes from the principal secretary for Investment, Entrepreneurship and Industry, Michael Nalletamby.

All participants who took part in the competition, conducted purely online, were presented with a certificate of participation.

Present at the ceremony were the director general of the Division of Science, Technology and Innovation Xavier Estico, the ambassador of Africa Code Week Challenge in Seychelles, Jessica D’Unienville, teachers and parents.

The Africa Code Week Challenge was launched in June for the whole continent and the participants, individually or in groups, had two months to develop a code under the theme ‘Change the world with your superpowers’.

The coding game developed by Alana and Danilo involves super heroes Dboy, Agirl and Cminigirl fighting Covid-19 from the ground and from the air with their laser guns filled with a cure against the virus.

“We were not thinking about winning as we just wanted to take part to learn and to broaden our minds in coding. But to win the first prize now feels really great. We took just took two weeks and a half to complete our game and we are very happy,” said Albert.

“I joined the competition with an open and empty mind just to participate and to have won the second prize really makes me happy,” said Narayan, who took one week to develop his game.

In his code game, his super hero, without a name for the moment, has to escape three attacking Covid-19 viruses to win points and win the game upon reaching 50 points. If he gets in touch with the virus his life decreases, meaning he loses points and loses the game at zero point.

For Gabriel Suzette, Dylan Francourt, Riah Aglae, Mariah Meme and Eva Lawen, their coding game has six levels with their super heroes – Ocean, Edie, Manic, Mend and Ivy – individually fighting the world’s illness on land, sea and in the mind before eventually combining together to form an all super hero to fight the combination of the illnesses.

Addressing the gathering, Mr Estico said that the Africa Code Challenge, a component of the Science, Technology, and Engineering and Mathematics (STEM) programme, provides the ideal platform for the youth to develop their coding skills, especially in this rapid global village where it is imperative that no talent is left behind.

“We are very proud to partner with the Africa Code Week team to deliver this annual activity in Seychelles and we endeavour to introduce and enhance digital literacy skills so that our youth does not only become consumers of technology but also developers,” Mr Estico said.

“We are conscious the Africa Code Week offers a variety of activities for both students and teachers that Seychelles has not yet tapped into and we strive to access as many of these activities for the benefit of our youth,” said Mr Estico, who congratulated the students for having successfully participated in the very first Seychelles Africa Code Challenge.

“For Ireland to be associated with this event is particularly close to our hearts and it’s close to our Irish tradition here in Seychelles,” said Ambassador O’Neill who, as a former teacher, congratulated the teachers and parents for grooming the students in the competition.

“I am quite sure that there will be many years of events in Seychelles and that someday you will be supporting your kids to do something very weird in science that you won’t even understand,” she said. 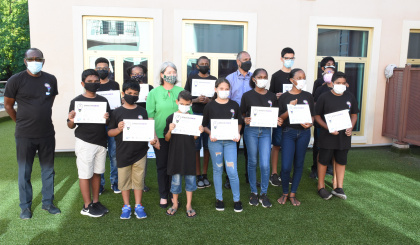 Winners in a souvenir photograph with guests 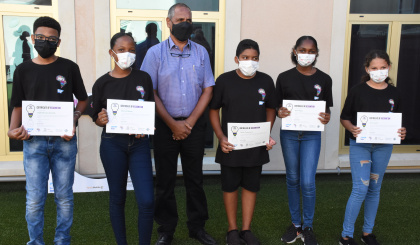 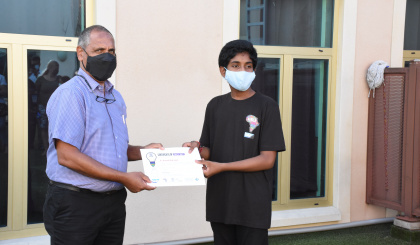