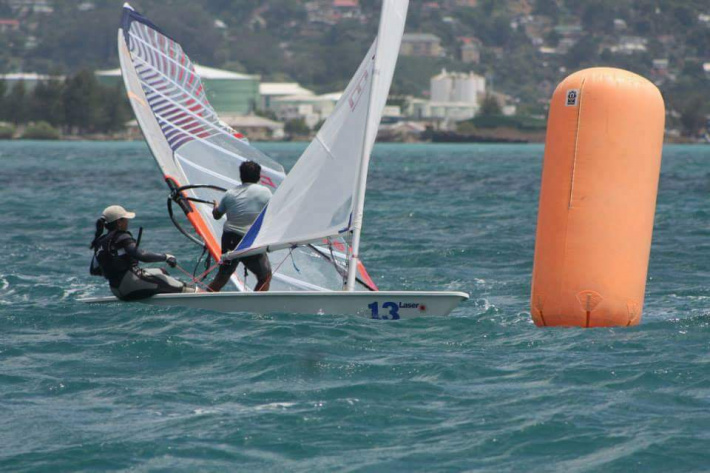 Meggy Gertrude sailing a Laser 4.7 as her father Danny windsurfs

In 2007, Meggy Gertrude made history for Seychelles by winning the country’s first ever gold medal at the All-Africa Games.

She achieved the feat in the Laser 4.7 category at around 2pm in Algiers, Algeria (5pm in Seychelles) and as she was receiving her gold medal and the country’s national anthem ‒ Koste Seselwa ‒ was being played and the Seychelles flag was being raised to the sky at the Algier plage where the sailing competition had taken place, the badminton mixed doubles duo of Juliette Ah-Wan and Georgie Cupidon was on the verge of writing another interesting script for Seychelles’ sports history with a gold medal of their own.

This was on Thursday July 19, 2007 and Seychelles was making its seventh participation in the quadrennial Games.

Gertrude was to take part in the Laser radial class initially but opted for the Laser 4.7 upon arriving in Algeria for the Ninth All-Africa Games. She collected six first places, four second places and a fourth place and a fifth position. After her worst two races were discarded, she finished with 16 points for first place overall.

All that happened in Algiers 14 years ago are still fresh on Gertrude’s mind.

“This was my best moment in sailing and I still cherish it. Although I have won other titles, they don’t match the gold medal I won at the All-Africa Games in Algeria in 2007. To make it even bigger, I was only 17 years old,” Gertrude told Sports NATION.

Her performance propelled her to win the Young Female Athlete of the Year 2007 title and she was runner-up to Sportswoman of the Year Juliette Ah-Wan.

Gertrude was only six years old in 1996 when she was introduced to sailing by her dad Danny Gertrude and like all beginners she sailed an Optimist. She then moved to Laser 4.7 and Laser radial until she stopped to proceed to the AMC Metropolitan College in Greece for a Bachelor’s degree in shipping and port management.

Back home two weeks ago after completing her studies, Gertrude told Sports NATION that she is looking forward to make a comeback in sailing, but is also thinking of having a go at kitesurfing.

“Kitesurfing looks interesting,” she said. “I might do both sailing and kitesurfing. I have always loved the sea ever since I was a child.”

In fact, Gertrude has scored countless of wins both at sea and in class as she has proven herself to be a bright student.

In the 2013 Regional Sailing Championship in Seychelles she showed her prowess on the sea to win all 10 races to win Laser radial gold and she successfully defended the title in Mauritius the following year (2014).

Since she loves the sea, after completing her studies in Business and Accounting in 2008, Gertrude opted to do an advanced certificate in navigation seamanship at the Maritime Training Centre and she emerged as the most outstanding performer among a group of over 60 students during the graduation ceremony in April 2011.

Her sisters Elsie and Beth were also avid sailors and they all received the support of their mum.

Gertrude was also involved in an accident at sea during a National Championship when her Laser radial boat collided with the boat carrying media personnel. She was hit in the head and lost consciousness and had to be transported to hospital for medical attention.

The 31-year-old also told Sports NATION that “female sailors deserve more encouragement as sailing is not an easy sport to do”.