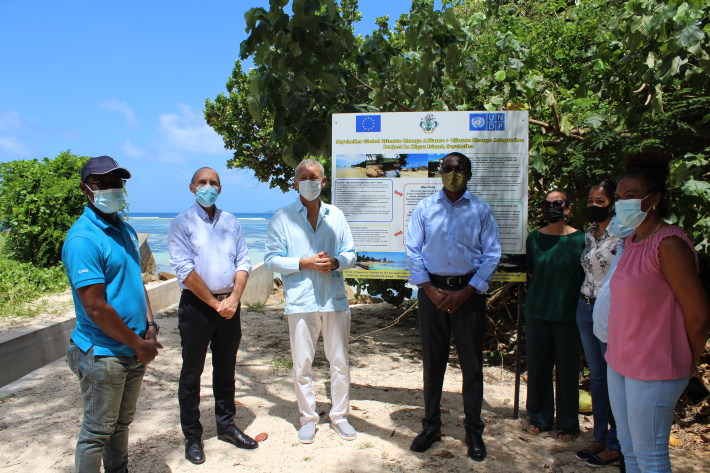 According to the government’s Nationally Determined Contributions, adaptation to climate change is becoming an urgent priority as most of the Seychelles population and the country’s critical infrastructures are located along the coast.

Past experiences clearly demonstrate the detrimental effects coastal flooding and coastal erosion have on socio-economic activities and natural ecosystems. After experiencing two extensive flooding during 2013 on La Digue due to tropical cyclone ‘Felleng’ and the floods which followed thereafter, the Global Climate Change Alliance Plus (GCCA+), which is a European Union (EU) initiative, has identified La Digue as a potential area in need of mitigation measures to reduce risks of flooding and coastal degradation.

Minister for Agriculture, Climate Change and Environment, Flavien Joubert was accompanied to La Digue by EU Ambassador Vincent Degert; the Ambassador of France to the Republic of Seychelles Dominic Mas; Rajesh Parboteeah, EU project manager; principal secretary for climate change Rebecca Loustau Lalande; director for the climate adaptation management section Selvan Pillayand two technicians from the department of climate change to explore these projects which started on April 1, 2017 and completed in March this year.

These projects entitled ‘Supporting adaptation to climate change in coastal areas’ were funded by the EU through the Global Climate Change Plus Initiative (GCCA+) and implemented by the United Nations Development Programme (UNDP). The project achieved its intended objectives through the formulation and adaptation of an integrated shoreline management plan, engaging in civil engineering works to enhance hydrological dynamics and productivity of stream channels and wetlands mitigating saltwater contamination, and improved the flood buffering capacity along the coast. The sustainability of key actions and maintenance will be critical and taken on board by relevant authorities and through the continued involvement of the inhabitants of La Digue as current and future custodians of the island.

To honour the completion of the GCAA+ projects, the environment department organised a small tree planting ceremony next to the helicopter pad which is one amongst the five drainage outlets, consisting of a 30-metre drain and a culvert outlet to the sea at Anse Réunion.

In his opening remarks, Minister Joubert welcomed the Ambassador of the EU to Seychelles on his second visit here and briefly highlighted the different components of the project

The project consisted of four sub-components, one of which is to construct five drain outlets and two groynes ‒ one at La Passe and the other at L’Union Estate. The groynes include a two-metre width walkway and an embankment stabilisation at Lanmar Soupap. This project started on June 1, 2020 and took 180 days to complete at a cost of US $749,676.28.

He further stated that with the completed project the government will have to undergo regular monitoring and maintenance to assess the effectiveness of the outlets and the groynes as well as their physical aspect of the infrastructures including regular cleaning. He further noted that he is pleased to have witnessed the positive outcomes of the efforts put in such a project.

“History will judge us not by what we did in the 180 days of the project implementation timeline, but by what we do from this day forward. That is how the GCCA+ Project will be measured by future generations of La Digue. On behalf of the government of Seychelles I would like to thank the European Union for their continuous support and assistance over the years, especially on such important issue as climate change which has an effect on our everyday life as islanders,” said Minister Joubert.

He further thanked various agencies, stakeholders and other individuals involved in the implementation of these projects.

“I would like to give thanks to the UNDP and Gibbs Seychelles, the management team of Ascent Project as the contractor, and all my ministry’s professionals for the extraordinary efforts and performance they have put in to make the project a successful one and patiently overcome the numerous challenges faced, in a professional manner. Last but not least, I would like to thank the member of the National Assembly, district administrator and the La Digue community for your continuous engagement and continued confidence in the project team,” he added.

In his statement, EU Ambassador Vincent Degert highlighted that this project will improve the livelihood of the citizens of La Digue. He further noted that Seychelles has a long history in delivering projects and this strengthens the relationship between Seychelles and the EU. Ambassador Degert noted that mainstreaming of climate change in all the policies that are conducted by the government, is a great initiative as we can only achieve results if all other sectors of the government are really taking onboard critical services such as agriculture and transport.

“There is no better timing to have this event done today because from September 27 till October 12, we are in the three weeks of climate change diplomacy, we are precisely at the right moment to celebrate this event. This year marks 30 years of partnership between UNDP and Seychelles, we have been actively working together. Seychelles has been amongst the first partners in the world to ratify the UN convention on Climate Change back in 1992,” said Ambassador Degert.

He presented the final report of the GCCA+ project on La Digue to Minister Joubert and a board game as education and sensitisation are important, therefore it is important that the children understand the importance of protecting the coast.

The overall objective of the GCCA+ programme is “to ensure that the people, economy and environment of Seychelles are able to adapt to and develop resilience to climate change and its effects, thereby safeguarding the sustainable development of Seychelles".

The accompanying photos show some highlights of the La Digue visit.

Press release from the Ministry of Agriculture, Climate Change and Environment 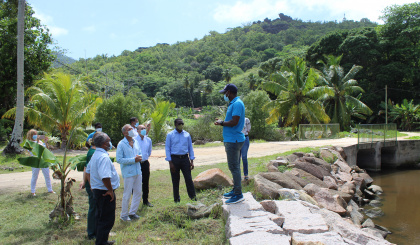 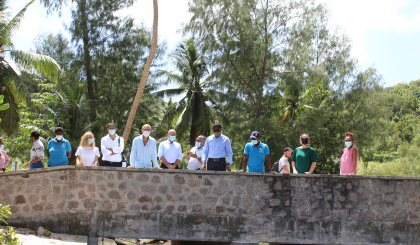 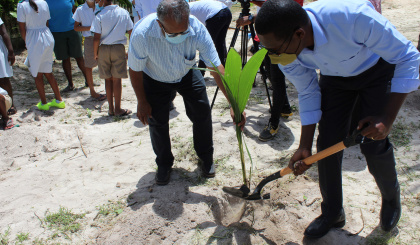 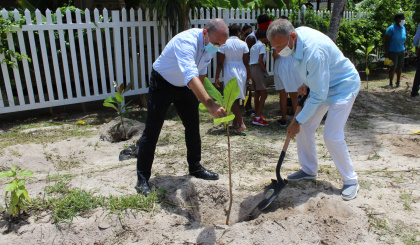 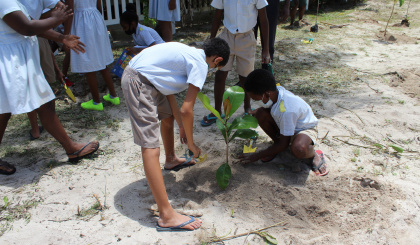