Van Goulding has been instrumental in teaching generations of Seychellois children to swim and sail safely.

Back home in England, Miss Goulding recounts to Sports NATION how the Sail Training Scheme (STS) was born in Seychelles and who were the people behind its birth and the progress of watersports among youngsters here.

She said it was enthusiastic members of the Seychelles Yacht Club (SYC) who ran a pilot scheme in August 1976, teaching girls from Regina Mundi to sail in the Victoria harbour.

A year later (1977), she said, she came to Seychelles along with fellow Royal Yachting Association (RYA) instructor Sandy Chapman to run the STS, funded by the SYC in partnership with the Ministry of Education.

“The project set out to teach young people to sail for personal, social and economic reasons. SYC hoped to increase its membership and to encourage young people to take up careers connected with the sea.

Miss Goulding noted that before starting a sailing course, students needed to be confident in swimming. So they started teaching youngsters to swim at Beau Vallon.

“The first sailing lessons were given in borrowed boats ‒ 14 foot dinghies – one instructor teaching two or three students to helm and crew. We started by teaching 25 students selected from different schools. They had one lesson a week for 10 weeks. Those who enjoyed sailing continued for a second course. Lessons were free.They beat upwind, sailed downwind and ‘reached’. If they failed to move quickly enough the boom hit their heads. If they did not keep the boat balanced in gusty winds, the boat capsized. All sailors needed to know how to right a capsized dinghy. Life jackets were worn but sailors had to be confident in deep water. As only 15% of children at school could swim the instructors started swimming lessons at Beau Vallon for non-swimmers who wished to sail,” said Miss Goulding.

She added that when six Mirror dinghy kits arrived by sea, the instructors built the fleet. Sections of 9mm marine plywood were joined with copper wire to make the hull and the seams were sealed with fibreglass. At first only hand tools were available. Some people like Eston Dubel came to help build the dinghies after school, others like Alex Auguste, came to help teach others. Boat launching ceremonies were joyful occasions, for each new Mirror with its red sail meant that more people could have lessons each week. Before that SYC members gave the volunteers permission to use their 14-foot dinghies for teaching.

“Sailing classes proved popular but there were challenges. The Mirror dinghy with a 2 ½ hp engine that was used for safety wasn’t powerful enough to tow dinghies or rescue capsized boats in storms. The first red Zodiac brought to Victoria in 1978 for marketing photography saved the situation, for it became the STS safety boat with a 25hp engine. Increasing numbers of students created a need for more instructors. Expatriate wives volunteered to teach groups in the mornings and teenagers who had gained an intermediate certificate taught the afternoon classes,” she added.

Miss Goulding told Sports NATION that students who had new skills wanted to continue sailing but they couldn’t afford their own equipment. STS had to make provisions for them. During the south-east monsoon races were held on Saturdays. Competition was so fierce that some youngsters sabotaged dinghies causing damage that had to be repaired by staff.

She recalled that STS was closed in August 1979. But after young sailors petitioned the President for STS to continue, the government agreed to take more financial responsibility.

“I returned to Seychelles in January 1980 and STS developed at a great rate. Fibreglass 420s were purchased and another fleet of Mirror dinghies were built at the Technical School under the supervision of Ron Jurd. Jack Holt, the designer of the Mirror, changed the design of the dinghy so that less damage would be caused by the fixed dagger board hitting coral reefs.

“Young Seychellois were employed to teach and maintain equipment and several went to the United Kingdom (UK) to gain qualifications as instructors.

“STS offered seamanship courses, advanced courses with use of spinnaker and racing techniques and a few serious people took a navigation course. Some of these became yacht skippers,” she added.

Miss Goulding recalled that in 1981, Verney Cresswell and Kevin Hyde brought their kayaks to Seychelles, inspiring students to paddle.

At that time, canoes were built by Graham Sims at the Port Launay National Youth Service (NYS) village and by STS staff and students at the Yacht Club. Sponsors financed the fibreglass and resin, the paddles and other equipment.

“When windsurfing became popular and affordable, STS introduced windsurfing classes. By the mid-1980s, STS catered for 100 watersports students each day. One course was held in the mornings and two in the afternoons. Hard working staff and volunteers persevered to share their love of sport with young and old. It is rewarding to find that some of the earliest students continue to compete 40 years on!

“The early success of STS lay in the devoted work of the staff who believed they could make a difference to the lives of young people, the encouragement of the Seychelles Yacht Club, sponsorship from individuals, companies and embassies and the financial assistance from government. People who witnessed the boys and girls having fun wanted to contribute to STS,” said Miss Goulding.

She adds: “Sailing is an exciting activity that requires one's full attention. It’s good for recreation and it is not necessary to be involved in racing at all. Paddling, surfing the waves, canoe polo, racing and expeditions have been enjoyed by hundreds over the years.We never guessed that future sailors would be competing at the Olympics. Our aim was to help people enjoy and use their surroundings and to help towards maritime careers.”

Miss Goulding concluded by saying: “I was neither a good swimmer nor a brilliant sailor, but enjoys teaching, organising and bringing people together to have fun.”

Participants recalling their youth have said:

“I learned to put safety first.”

“I made friendships with people that have lasted.”

“STS showed me how to do many things – not just watersports.”

“In the First Aid course I learned resuscitation and I saved a tourist who was drowning.” 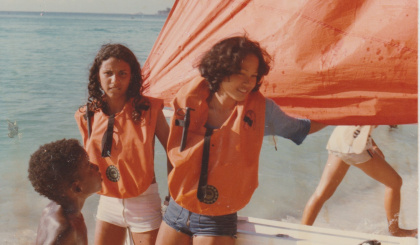 Debra Mellon and Virginia Dutton with a Mirror Dinghy 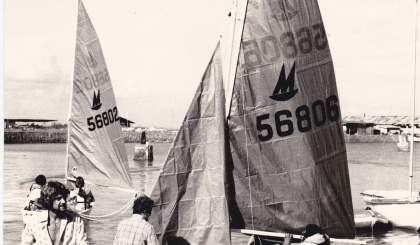 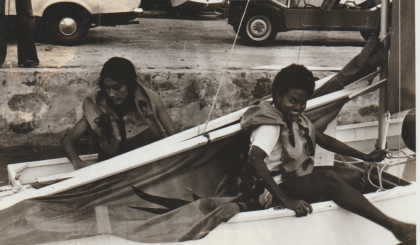 Dorothy Gardener and Melanie Thésée (right) in a Mirror Dinghy 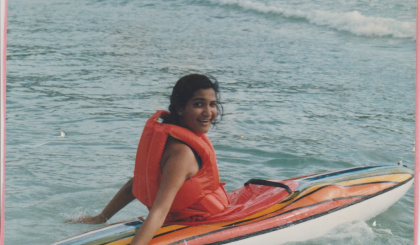 Luxmi Talla getting the feel of a canoe