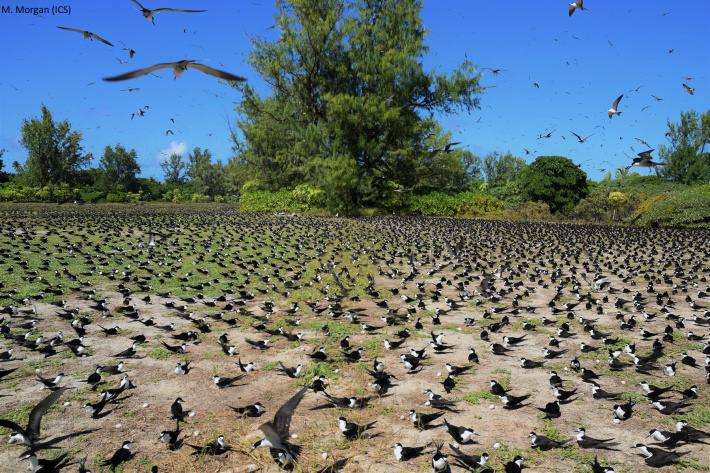 Celebrating its 20 years of service to the preservation of Seychelles’ biodiversity, the Island Conservation Society (ICS) is calling for a national debate to sensitise the general public and to question the continuing relevance and justification for Sooty Tern egg collection and consumption in Seychelles during this 21st century, amid global concerns of a sixth mass extinction of the world’s most vulnerable species.

The Sooty Tern, known in Creole as ‘Golet’, is a pelagic seabird that has been nesting over centuries in Seychelles, which hosts major colonies of breeding pairs of Sooty Terns on several islands.

The results over the past 5 years indicate an alarming decline of Sooty Tern numbers in Seychelles, a phenomenon also being observed and recorded in other parts of the world.

For example, a study focusing on Ascension Island in the Atlantic Ocean, highlights an 84% decline in the Sooty Tern nesting population.

Other studies show massive declines globally, suggesting that a re-evaluation of the Sooty Tern conservation status is necessary, even urgent.

These studies conclude that many colonies in the world have been severely reduced and even exterminated by factors including human development, habitat change, introduced predators and collection and consumption of eggs or ‘dizef zwazo’ in Creole.

Decline has also been linked to the rapid expansion of industrialised fisheries impacting the birds’ food supply.

For the very first time in June 2021, a National Sooty Tern Census, led by the Ministry of Agriculture, Climate Change and Environment (MACCE) with support from the Islands Development Company (IDC), ICS and Bird Island was carried out across all the colonies on the islands/atolls of Cosmoledo, Desnoeufs, Ile aux Vaches (Bird Island), Aride, Ile aux Récifs, Farquhar, Etoile, and Bancs Africains (African Banks). While the data from this census is still being analysed by MACCE, preliminary results reveal an alarming decline in the Sooty Tern population, indicating that the numbers of Sooty Terns in all these colonies have been impacted by several factors that need investigation, including the regulated and illegal collection of eggs.

Furthermore, there should be continuous monitoring of Sooty Tern biology and ecology, including breeding success, survival, and rate of juvenile recruitment into the breeding population, movements and foraging at sea.

There needs to be research into how changes in the marine ecosystem may be impacting the food supply for Sooty Terns and other seabird populations. ICS fully supports more effective implementation and enforcement of legislation for the protection of seabirds, including increase in public awareness, education and respect, as well as appropriate funding for these activities.

ICS firmly advocates for a review and revision of the existing policy regarding Sooty Tern egg collection and consumption based on an annual assessment of scientific evidence and evolving conservation standards.

Since dizef zwazo is a traditionally indulged-in local delicacy, it is particularly difficult to raise concerns pertaining to the decline of the Golet.

There is also insufficient public awareness and education about the effect of continuing consumption of dizef zwazo on the future of the species, hence why poaching has persisted and legislation has not been effectively enforced.

ICS strongly believes that through education for sustainable development, the Seychellois can develop a better understanding of the issues and that improved sustainable lifestyles can be catalysed through informed choices.

A copy of the ICS Position Paper can be downloaded from http://www.islandconservationseychelles.com/news