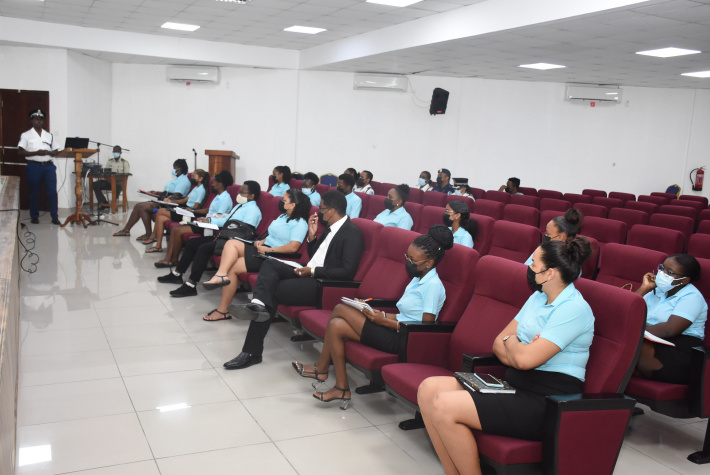 As part of its campaign to attract more people, especially the youth, the Seychelles police force recently met with members of the Seychelles National Youth Assembly (SNYA), giving them an insight into the structure of the force.

The activity is part of the force’s calendar of activities to commemorate this year’s National Police Day which is on September 21.

The interaction, which began with a presentation at the Seychelles Defence Academy (SDA) auditorium at Perseverance, was primarily aimed at getting young people interested in a career in policing.

Through some very detailed slides and explanations, Assistant Superintendent (ASP) Vincent Marie, who is in charge of the training programme at the Seychelles Police Academy (SPA), explained to the young parliamentarians the benefits of seeing themselves in the police profession and also their potential to make a difference by choosing a career with the force.

To begin with, ASP Marie introduced the audience with the Police Force Act which states that the ‘Force shall be employed in Seychelles for the maintenance of law and order, the preservation of peace, the prevention and detection of crime and the apprehension of offenders, as well as the force’s other main functions, including protection of life and property, traffic control and regulation, participate in national defence and also the enforcement of all laws and orders.

He also briefed them on visible policing which include the traffic section, the stations, operation coordination, communication and command centre, police emergency services, the Dog Unit and the sensitive and static security.

The young parliamentarians were also briefed on the minimum entry requirements for the force and ASP Marie outlined needs which consist of a ‘C’ grade in the International General Certificate of Secondary Education (IGCSE), French DELF A2 or equivalent, while applicants also need to be physically and mentally fit and also test negative for any drug, or illegal substance.

As for development opportunities, ASP Marie mentioned possibility of transfers to a more advanced and specialist unit, training opportunities, both local and overseas, personnel training, as well as promotions.

An area which captured the attention of the audience more was the scheme of service, including incentives and other benefits.

To conclude the presentation, ASP Marie convinced the young parliamentarians to persuade their peers that they do have a place in the organisation and that there are many opportunities for advancement, adding that through the actions police officers take on a daily basis, they are agents of change and can make a huge difference in people's lives.

National Police Day is celebrated worldwide – on the country’s chosen date – to remember the sacrifices that the men and women in uniform make as they provide safety to all.

According spokesperson ASP Jean Toussaint, locally, the day is normally celebrated on September 21 to coincide with the International Day of Peace.

Officially known as World Peace Day, September 21 is dedicated to world peace, and specifically the absence of war and violence, such as might be occasioned by a temporary ceasefire in a combat zone for humanitarian aid access. The day was first celebrated in 1981, and is kept by many nations, political groups, military groups, and people.

In 2013 the day was dedicated by the secretary-general of the United Nations to peace education, the key preventive means to reduce war sustainably.

To inaugurate the day, the United Nations Peace Bell is rung at the UN Headquarters (in New York City).

The bell is cast from coins donated by children from all continents except Africa, and was a gift from the United Nations Association of Japan, as “a reminder of the human cost of war”; the inscription on its side reads, ‘Long live absolute world peace’.

Other activities hosted by the Seychelles Police Force to commemorate this year’s Police Day include blood recruitment drive, motivational talks, donation to the Seychelles Stroke Foundation and recognition of the force’s retirees, among others.