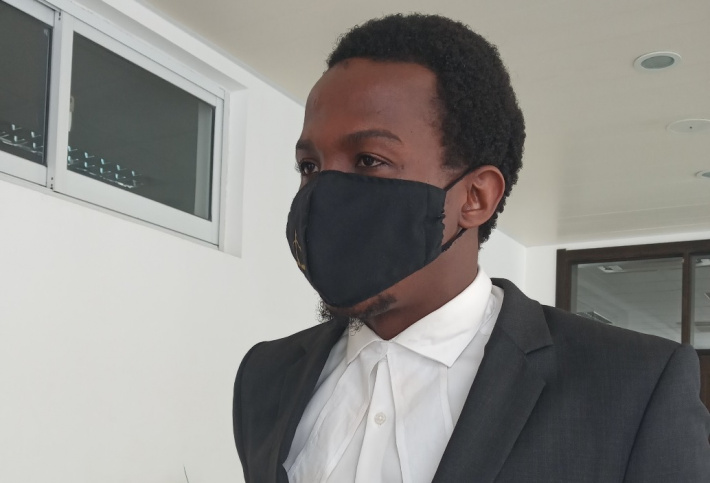 Mr Knight talking to the press

In a ruling delivered yesterday by Chief Justice Ronny Govinden, Judge Burhan and Judge Carolus, the affidavit presented by Nasim Onezime is not inadmissible in Seychelles Courts. Thus the preliminary objection made by the Office of the Attorney General was upheld and the petition was dismissed.

To recall Nasim Onezime, a Kenyan National married to a Seychellois, was arrested and subsequently deported to Kenya and following her deportation, Nasim Onezime represented by lawyer Basil Hoareau filed a petition before the Constitutional Court of Seychelles seeking damages against the government of Seychelles for the sum of R1,010,800 ((one million ten thousand eight hundred rupees) for unlawful arrest and detention that infringed on several of her Constitutional Rights. The petition comprised also an affidavit by the petitioner.

The petitioner’s affidavit was signed by the petitioner in Mombasa, Kenya and notarised before a Mr Geoffrey Sirioyi. On the affidavit is a red seal sticker and a blue stamp with the words Commissioner of Oaths and Notary Public inscribed on it.

The government of Seychelles represented by Stephan Knights raised as a preliminary objection that the petition should be struck out on the grounds that the affidavit is defective, because it was not certified in accordance with the laws of Seychelles. The office of the Attorney General is represented by Aaisha Molle.

Chief Justice Govinden noted that, “The Apostille Convention was ratified by Seychelles in 1978 and came into force in 1979. Kenya has not ratified the Apostille Convention and is therefore not a party. Hence Section 28(1) would be applicable to documents from Kenya and other States that are not a party to the Convention. Although Section 28(1) has provided the procedure for authentication of foreign affidavits and documents from any State, in this instant case before us, this procedure does not seem to be adequately followed which has resulted in the challenge before this Court”.

Several cases were cited pertaining to the same point.

Mr Hoareau on his side contended that Section 7 of the United Kingdom Civil Evidence Act of 1851 which applies in Seychelles by virtue of Section 12 of the Evidence Act is not applicable in the present case, since the document in question is not a copy of an affidavit, but an original which has not been deposited with the foreign court.

Both parties to this case have admitted that Kenya is not a party to the Apostille Convention, accordingly, the affidavit by Mrs Onezime, signed by a commissioner of oaths and or Notary public, does not suffice. This accordingly renders the petitioner’s affidavit inadmissible in the Courts in Seychelles.

Furthermore, it would also not be possible to file a petition de novo as any petition would be out of time, and well past three months of the alleged contravention. In conclusion, the Court dismisses the petition on the basis of the above findings and the inadmissibility of the Petitioners affidavit. Each of the parties shall bear their own costs.

After the verdict, Mr Knight noted that, “The minister’s decision to deport Nasim Onezime was in line with the rights of the sovereign state to deport someone in the interest of national security and public interest. I constantly hear that the AG’s office is using technicalities, we are just like any other law firm. The only difference is that we advise government organisations. In this case, we developed the case strategy and we showed the ministry how they can win the case. They indicated to us to use the preliminary objection and we used only one objection. The petitioner was given the opportunity to amend the affidavit and this resulted in the case to be dismissed”.

Mr Hoareau expressed his disappointment with this verdict, although he said he respects the Court. “We do not accept their decision at all and we are going to proceed to the Court of Appeal. I was relying on the provision order 41(12) of the White Book in the Supreme Court Practice 1979 which is still applicable.

In extension to that, an affidavit sworn outside England and for that matter outside Seychelles and sworn in the Commonwealth before a number of persons including a public notary is admissible. And the fact that the affidavit was signed in a Commonwealth country, there was no need for the affidavit to be authenticated in another way. Today the Constitutional Court said that we should not look at the British law because of the provision stated in 28 (1) and I am not agreeable to that as the section does not make provision for all documents signed outside the country should be done in accordance to section 28 (1). My argument that I have always brought forward is that this provision permits the Court to take judicial notice of the document which has been signed or submitted.

In other words, it allows the Court to judicially notice these documents without going into authentication, but there is also the British law which provides the applicability of the UK Commissioner for Oaths Act and Order 41 (12) of the Supreme Court Practice Act which recognises affidavits sworn in Commonwealth countries. I respect their decision but I am also disappointed.”