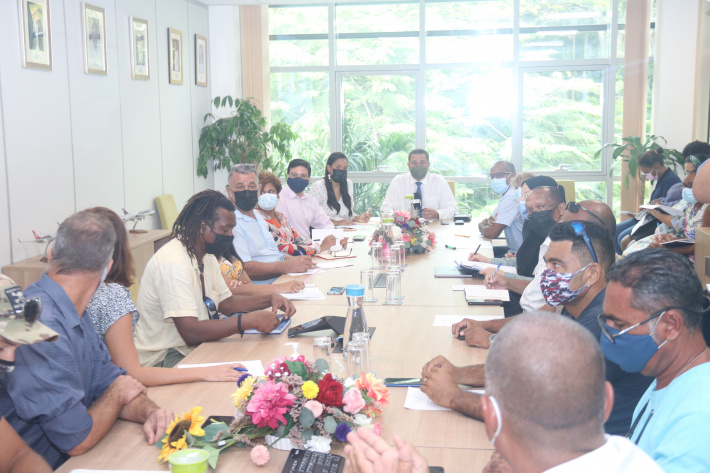 The meeting between Minister Radegonde and the yacht owners and operators yesterday (Photo: Thomas Meriton)

As part of his first series of meetings with key players in the tourism sector, Minister for Foreign Affairs and Tourism, Sylvestre Radegonde, yesterday met with a group of yacht owners and operators.

The meeting, held at the Botanical House, was an opportunity for the tourism minister to take the pulse of the yachting business in the country which, given the characteristics of its operations, differs greatly from on-land tourism businesses.

First topic on the agenda for the day was fuel concessions for yachts which yacht businesses have stopped getting since last year.

The yacht owners noted that it is unfair that certain businesses are afforded the benefits of fuel concessions while some others are denied, adding that either it applied to everyone or no one at all.

They additionally called on the minister to look into providing temporary fuel concessions for yachts to help them rebound from the financial impact of Covid-19.

Minister Radegonde stated that he cannot pronounce himself on this although he stressed the government is currently winding down on fuel concessions due to the country’s financial difficulties.

A lack of yacht-friendly infrastructures and disembarkation points on Praslin and La Digue was another issue raised.

Employment was also a hot issue whereby the yacht owners noted that it takes the employment and immigration departments too long to process gainful occupation permits.

Meanwhile the representative of the skippers association stated that some yacht owners are overlooking Seychellois skippers in favour of expatriate workers.

The negative attitudes and anti-social behaviours of certain Seychellois skippers and yacht crew members were also addressed which includes not having the required discipline while onboard yachts, being unreliable and issues of drunkenness while onboard yachts with clients.

Although he highlighted that this does not apply to all Seychellois workers, Minister Radegonde stated that locals should reevaluate their attitude and ensure they give the best of themselves.

Also related to staff onboard yachts, the yacht owners noted that a lot of crew members operating the yachts, although trained at the Seychelles Maritime Academy, lack the necessary hospitality training.

In response, the minister and principal secretary Francis concluded that they would revisit the memorandum of understanding between the Seychelles Maritime Academy and the Seychelles Tourism Academy.

Other issues that were addressed included illegal foreign skippers and crews, the need for more comprehensive regulations regarding yachts and licenses which yacht owners said should be renewed in a longer time spend rather than every year.

On his part, Captain Valmont clarified that the SMSA will soon take over the responsibility of yachts licenses from the Seychelles Licensing Authority and when this does happen, presumably next year, the licenses will only have to be renewed every five years.

“The meeting was very fruitful because we had the opportunity to discuss various points and provide us with a better understanding of their concerns. There are some issues we can work directly with them to resolve such as training for crew members and ensure the tourism academy takes that up,” stated PS Francis.

“However there are some other elements that do not fall directly under the jurisdiction of the tourism department but what the department can do is to work in close collaboration with other government departments and agencies to ensure that these concerns are addressed.”