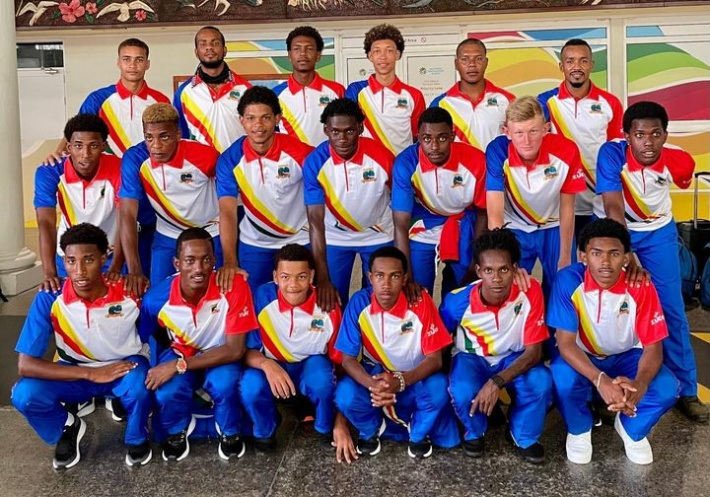 The courageous players of the Seychelles national selection

More humiliation for our national selection and country

Following its humiliating 1-7 defeat against the Coelacanthes of the Comoros in its opening match at the ongoing friendly tournament taking place at the Maluzini Stadium, the Seychelles national selection endured further embarrassment on Saturday through a 1-8 thrashing at the hands of the Swallows of Burundi.

Surely a nightmare for our young players who have been thrown together in a rush and sneaked out of the country, while having to further bear the consequences of poor practices on behalf of our local football governing body.

In Saturday’s match, the goals of the Swallows who were leading 4-0 at half-time were scored by Issa Hakizimana, Blaise Bigirimana, Bienvenue Shaka, Steve Nzigamasabo , Jules Ulimwengu and Landry Ndikumana.

The Burundians, who replaced The Gambia, will face the Comoros tomorrow.

After publishing the result of Seychelles’ first match against the Comoros in its Friday September 3 edition, Seychelles NATION was contacted by the chief executive of the Seychelles Football Federation (SFF) who, on behalf of the federation’s president Elvis Chetty, voiced out their frustration regarding the way the article was written.

It is worth noting that upon learning about the tournament and the country’s involvement through a foreign source, Seychelles NATION did try to contact the SFF, with all attempts to get information regarding the nature of trip, including preparations, the members and officials of the selection failed.

Having been opened to the public in the spirit of transparency which is highly being praised locally, football fans patriots would have known that the SFF was ‘bringing knife to a gunfight’ and the expectation would have been different.

In that particular scenario, the boys who proudly wore the national colours and defend the national flag are not to be blamed, but should rather be congratulated for their courage, bravery and patriotism.

It is still not clear why the SFF did everything behind closed doors and hopefully they will come out soon to give a reasonable explanation.

Football being the most followed sport locally, it made no sense that the business of the national selection was kept hidden from those who endlessly give their support to the national team and country.

As published before, it was only after the first match against the Comoros that the SFF, through a press release compiled by the Insight Voice connection, spoke about the trip, mentioning that newly appointed coach and directeur technique national (DTN) Franco-Algerian Haroun Osama Chetty, are working together to create and implement a strategic plan aimed at developing the skills of young players regionally, but also at developing a culture of success and wins.

Still according to the press release, Mr Chetty said the two matches against the Comoros and Burundi come at the right time in this process, providing the SFF with an opportunity to prepare for the future of Seychelles football, while the federation currently has a project in place to re-structure and create a plan to organise the team’s objectives collectively and work on precise and calculated goals revolving around competency and available resources.

The big question is why everything was kept secret, instead of introducing everything publicly through a press conference, whereby questions could have been asked and the public would have known about whatever is going on, be it good, or bad.

With local football being idle for over a year, how did the procedures go about, including selection and training since local sports is presently under restrictions set by the health department due to the ongoing Covid-19 pandemic?

It would have also been an opportunity for the SFF to publicly introduce coach Haroun who occupies dual posts within the federation.

Since the DTN post involves providing grading, coach education and support, and to monitor and mentor coaches, who will monitor and assess coach Haroun?

Conceding 15 goals and scoring only two out of two matches is the perfect point of reflection for those in charge of our football to start re-thinking on their way of doing things.

Local fans are eager to know about the country’s football development plan and the future of Seychelles’ as it has been exactly a decade now since we grabbed the gold medal of the Indian Ocean Island Games on home soil, led by a Seychellois coach.

The head-to-head between Seychelles and Burundi