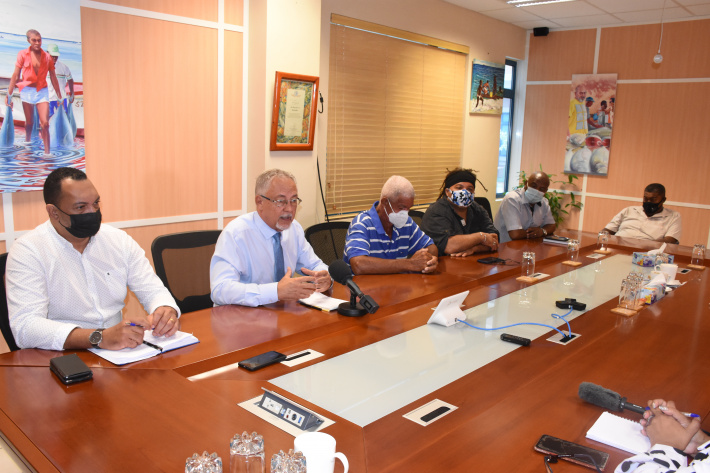 Seychellois seafarers who were engaged in employment on fishing vessels from European Union countries, will receive all or part of compensations owed to them by the union by the end of this year, Minister Jean François Ferrari has reassured them.

The Designated Minister and Minister for Fisheries and the Blue Economy gave the reassurance in a statement he delivered during a press briefing on the matter yesterday morning at Maison Collet.

This followed a meeting with three seafarer representatives, namely Joùlssé Louise, Simon Michel and Hughes Labiche. Also present during the meeting were the principal secretary for fisheries, Roy Clarisse, and the chief executive of the Seychelles Fishing Authority (SFA), Nichol Elizabeth.

The meeting with the seamen representatives was to provide them with an update on ongoing negotiations with the European Union (EU). It also followed rumours that the seamen concerned were planning to hold a protest to vent their frustration because they are yet to receive the compensation. They are claiming compensations after working on the EU fishing vessels from periods between 2005 and 2020.

Minister Ferrari stated that while conducting negotiations, the EU has agreed to pay compensations to the seafarers for the period 2011 to 2013 and to refund an advance payment made by the SFA to the seafarers for the period of 2014 to 2020 but is still refusing to pay compensation for work carried out between 2005 and 2011. This is as per the EU’s legal clause that the claim has been filed long after the 10-year timeframe and cannot be entertained.

“This is the biggest part of the compensation to be paid and if it is not entertained, many seafarers will be affected. We want to resolve this problem once and for all as many seafarers are getting older and older while some have unfortunately already left this world without having the chance to enjoy the benefits of their hard work,” Minister Ferrari said, noting that in the EU law, just like it is stipulated in our law, one cannot put forward a case after 10 years.

Furthermore Minister Ferrari admitted that the discussions with the EU on the matter are very difficult with regard to the technicalities that they (EU) bring up in the negotiations. He noted though that for the period 2014 to 2020 the EU is prepared to pay a compensation amounting to a sum of around R3.2 million.

“We have told them to hold on to the disbursement of the sum for now as we do not want the payments to be in installments as we want to know where we stand with other protocols with regard to the compensations for the period of 2005 to 2011 and 2011 to 2013,” Minister Ferrari insisted while pointing out that Seychelles will by next week be engaging in further discussions with the EU on the matter leading up to a political dialogue that will be held in October 2021.

“So today, we wanted to meet the seafarers to inform them that discussions are ongoing on the matter and we are doing our best but they have to take note that these are very difficult negotiations which will take time to reach a positive outcome. We shared with them the successes that we’ve had and also those that are pending. I fully understand their frustration but I want them also to understand the situation on hand and to support us. I want to reassure them that we are working to secure 100% of their compensation but if not, we’ll make sure they get the maximum,” Minister Ferrari stressed.

He went on to add that if the negotiations for compensation for the period of 2005-2011 fail, they will explore other areas for negotiations like asking the EU for permission to use a certain amount of funds intended for other projects that are yet to be used to settle the compensation claims for the seafarers.

He noted that at this time of economic difficulties, the government is not in a position to settle the compensation from State coffers.

The seafarers’ representatives said at the end of the meeting that they were satisfied with the minister’s explanations and looked forward to the outcome of the forthcoming negotiations.

They said they have been patient for so many years now and they will go back and convince their fellow seafarers to have a little more patience..

“It’s not the fault of this government that we see ourselves in this situation today. The fault lies with the previous government who failed to negotiate fully on our behalf. I see that this government is doing its utmost for us to get our compensation and I am very satisfied with Minister Ferrari’s detailed explanations. We’ve been leading this fight from the beginning and we will continue to fight until we get what truly belongs to us,” Mr Louise said.

Mr Louise acknowledged that some seafarers were prepared to hold a protest but decided against it upon realising that the present government is not responsible for the situation they were in but is rather helping them to rectify the problem with the EU.

Mr Simon for his part said among the many mistakes made by the previous government, was the one that obliged the EU to recruit two Seychellois seamen permanently on all its vessels but to which the EU only paid a fixed daily penalty for not honouring the agreement. Minister Ferrari explained that failing to honour the agreement by the previous administration is also causing difficulties in the negotiation to which the EU is insisting that the fixed penalties paid be used to settle the compensation for the seafarers.