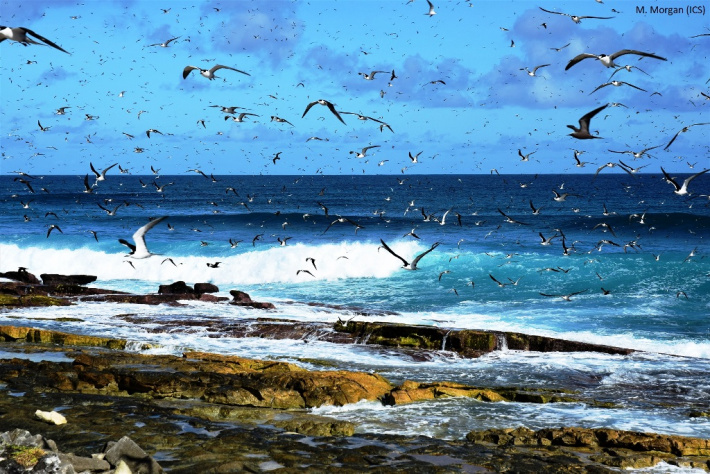 Sooty terns streaming in from the sea

The Sooty tern (Onychoprionfuscata) or Goëlettes/Golet (in French and Creole respectively), is one of the most abundant seabirds in the world, estimated at more than 20 million pairs worldwide. Seychelles hosts some of the largest colonies in the region, arriving annually to the Western Indian Ocean archipelago at the start of the south-east trade winds (Vann Swet). These terns choose this time of year to exploit natural peaks in marine productivity, which increases their chances of successfully raising a chick. Although they nest in both the inner and outer islands, the majority of birds are found in the latter. They build simple nests on the ground and raise one chick per season. Although females can replace lost eggs within the same breeding season, it can throw the birds out of sync with marine productivity, limiting breeding success. Typical of seabirds, the Sooty terns spend most of their time at sea, only returning to host islands during May to September. They are long-lived, easily reaching over 30 years old.

Although considered a traditional delicacy in the Seychellois culture, it was only in the early 1900s that healthy colonies were recognised as a source of revenue, and commercial egg harvesting began. During these early days, small-scale consumption of Sooty tern eggs would only have had negligible impacts on the pristine colonies, they were more threatened by introduced animals such as cats and rodents by early settlers. The first major human disturbance to Sooty terns came with the introduction of coconut plantations in the late 19th century, creating unfavourable tall canopies and dense understory when left unmanaged, and therefore reducing access to the ground and preventing ground-nesting attempts.

Fortunately, not all locations were affected, and thriving colonies remained in the Outer Islands of Cosmoledo, Desnoeufs, and Farquhar.

In subsequent years, fearing that such large-scale exploitation must be impacting the Sooty terns, detailed studies were initiated. Advice from expert ornithological studies helped inform the Seychelles' government on sustainable management of egg harvesting, leading to the much-needed legislation (The Birds' Eggs (Collection) Regulations 1972), which was revised several times.

Since then ever-increasing conservation efforts from Seychelles' government, NGOs, and private researchers have led to the return and stabilisation of colonies across several locations, along with a detailed understanding of the species. Although poaching was still present, it appeared Sooty terns were doing quite well following years of over-exploitation.

The conservation era has brought about notable positive effects, including huge population increases on Bird Island (15,000 to 700,000 pairs!), natural recolonisation such as Cousine Island, whereby Sooty Terns have returned to breed on the island for the first time in over 30 years, and increased protection throughout Seychelles with revised legislation and expansion of protected areas. However, despite these efforts, current trends of Sooty terns in the 21st century are concerning. Many colonies are showing declining trends and several populations have dropped to very low numbers. So, why are bird populations declining despite conservation efforts and protective legislation? Well, when compared to the past, birds are now facing much greater pressures, including; commercial fishing of tuna (which they associate with to feed), unknown effects of climate change, legal and illegal egg harvesting, poaching of adult birds, and marine pollution. This is a new era for the birds and the pressures have never been so intense.

Looking to the future, this bird species needs careful management to ensure they can continue to thrive in Seychelles. We know that extinctions are perfectly possible, with seven Seychelles Sooty tern colonies having become extinct in the past. Therefore, it is pivotal that the accumulating threats can be better understood and mitigated accordingly before the colonies reach a tipping point. Thankfully, the Ministry of Agriculture, Climate Change and Environment (MACCE) is tackling this issue head-on and has conducted a national survey this year, along with support from the Islands Development Company (IDC), the Island Conservation Society, and Bird Island Lodge. Individual researchers are also playing their role, most notably Professor Chris Feare, Dr Rachel Bristol, and Christine Larose who are currently studying Sooty tern movements from Bird Island using satellite tags. The collective efforts of the partners are a powerful combination and could be the saving grace for this species to continue to thrive in Seychelles. 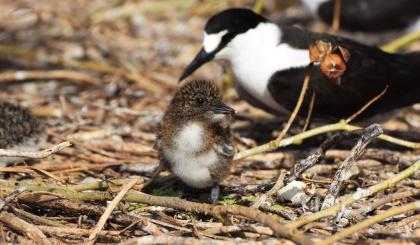 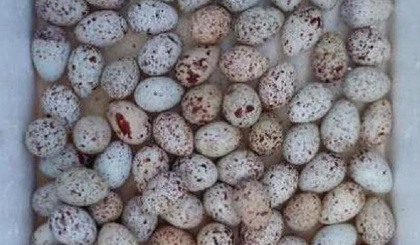 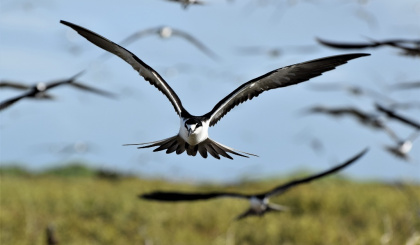 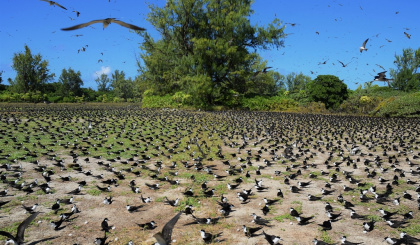