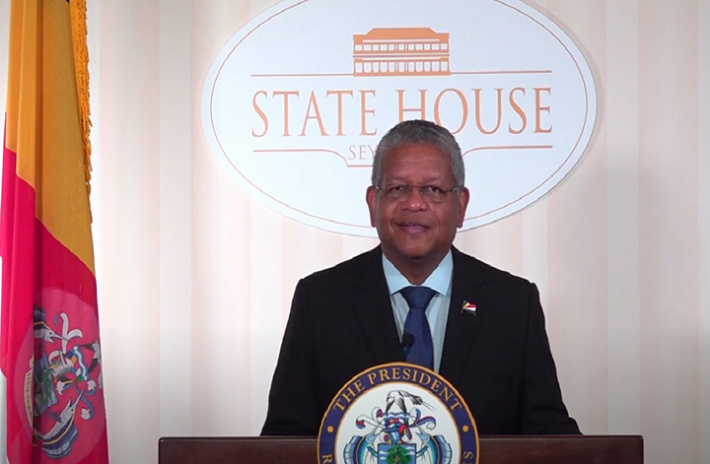 President Wavel Ramkalawan yesterday addressed the leaders of the Southern African Development Community (SADC) for the first time since his election in October 2020.

This was in the context of the 41st SADC summit for heads of state and government which is being held in Lilongwe, Malawi on August 17-18, 2021.

To note, the president delivered his address virtually due to the Covid-19 protocols which allowed for limited numbers at the summit in Malawi.

The summit is being held under the theme ‘Bolstering Productive Capacities in the Face of Covid-19 Pandemic for Inclusive, Sustainable, Economic and Industrial Transformation’.

The theme seeks to accelerate the implementation of the SADC Regional Indicative Strategic Development Plan (RISDP) 2020–2030, in particular, the industrialisation and market integration pillar.

Aside from taking stock of the progress of the RISDP, the 41st summit sees the president of Malawi, Dr Lazarus McCarthy Chakwera, assume the chairpersonship as of August 17, 2021, replacing Mozambique’s President Filipe Nyusi.

In his address, President Ramkalawan stated that trade between African countries should henceforth be the cornerstone of economic cooperation on the continent.

Towards that endeavour, President Ramkalawan announced to the summit that Seychelles is the latest African state to ratify the African Continental Free Trade Agreement (AfCTA).

The National Assembly ratified the AFCTA in June this year, a free trade agreement where African businesses can benefit zero percent tariffs and preferential rates while doing business on the continent.

“It has been estimated by the World Bank that the African Continental Free Trade Agreement will boost regional income by 7% or to the value of $450 billion. In this regard, I am pleased to announce to this Summit that Seychelles is the latest SADC member to ratify the African Continental Free Trade Agreement. Being an import-dependent country, the agreement will be a positive tool to help us achieve our objectives, tackle inflation and lower the cost of living for our people,” stated President Ramkalawan.

He also addressed the issue of access to vaccination, noting that “having access to vaccines is a basic human right and as long as Africa remains deprived of this vital resource, battling the Covid-19 pandemic will be futile”.

The president further urged countries with a surplus of the Covid-19 vaccine to share with other countries that are having difficulties acquiring the vaccine.

“Hoarding of vaccines serves no purpose, but only the narrow, selfish and misguided interests,” added the president.

President Ramkalawan also called on SADC leaders to give greater importance to the protection of seas and oceans which are already under pressure from overfishing, illegal fishing, impacts of climate change and other threats.

“Maritime security may seem to be a somewhat distant concept to some of us on the mainland. But let me reassure you all that the protection of our waters must be a concern to us all. The Western Indian Ocean maritime route accounts for 12% of the global world trade and the protection of this important route means protecting our very livelihood. Moreover, we need to take cognizance of the fact that the proliferation of illicit drugs and weapons, and the trafficking of persons transported via maritime routes are undermining the internal and regional security of all Eastern African States. All reports suggest that terrorist groups are funding their activities and enhancing capacities through such illicit maritime activities. For this reason, the issue of maritime security cannot be overstated and needs to feature prominently on our security agenda.”

The president also spoke of the threat of terrorism which could potentially spill over into the SADC region such as has been witnessed with the rise of insurgents at Cabo Delgado, a northern province in Mozambique.

Although it was his first speech to the SADC as president, President Ramkalawan is very much familiar with the organisation having worked with SADC as a parliamentarian and leader of the opposition.

In his capacity as leader of the opposition in the National Assembly, President Ramkalawan had served as chairperson of the Democracy, Governance and Human Rights Standing Committee of the SADC Parliamentary Forum from 2018 to 2020, and also participated in a number of its other activities, even serving as the chair of all chairpersons to oversee model laws of the Forum.

Seychelles affirms its commitment to the UN Food Systems transformation   |25.09.2021

20th anniversary of the adoption of the Durban Declaration and Programme of Action |24.09.2021