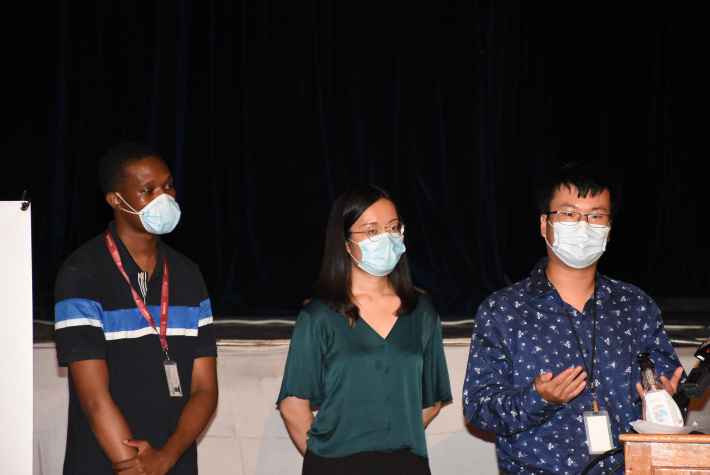 One of the teams making their presentation (Photo: Joena Meme)

Students from ETH Zurich, a public research university in Switzerland, and the University of Seychelles have collaborated on a research project once again, this time tackling the transport system in Seychelles.

This trans-disciplinary case study on the transport system follows up on previous collaborations between the two universities in 2016 and 2018 which dealt with some of the waste management challenges in the country. The students involved in the project are undertaking different courses at their respective universities ‒ from environment sciences to law to agricultural science to environmental engineering and more.

Following months of research and data collection, the students yesterday presented their preliminary results to their lecturers and stakeholders involved.

Swiss Ambassador for Madagascar, Comoros and Seychelles, Chasper Sarott, also bear the testimony to the presentation, via virtual call.

Some of the stakeholders involved were the Seychelles Public Transport Corporation (SPTC), department of transport, Seychelles Planning Authority, Ministry of Agriculture, Climate Change and Environment, and Ministry of Finance, Economic Planning and Trade.

Split in eight groups, the 45 students from ETH and University of Seychelles (UniSey) focused their studies on the transport system on Mahe.

Group one delved in the transport user experience, using questionnaires and interviews to gauge citizens’ opinions on their commute experiences, whether in personal cars, public buses and other modes of transportation.

As expected, the group noted that peak hours on Mahe are between 7am and 8am in the morning and 4pm to 5pm in the afternoon, which leads to road congestions.

The third group had the responsibility of scouring districts and interviewing the public on their perception on different modes of transport.

After interviewing over 290 individuals, the students established that public buses are the main forms of transportation (48%) followed by cars (40%) and slower modes of transport such as bicycles (9%). Nonetheless, they established that a large majority of the respondents would rather drive and own their personal cars due to a perception of convenience and faster mobility.

Cyril Willimann, from environmental science at ETH Zurich and team member of group three, explained that the project provided an interesting insight in the transportation system in Seychelles which differs greatly from Switzerland.

“It was really interesting to talk to people about how they see public transportation in Seychelles; it was especially interesting because it differs from Switzerland where we have a really well-built transportation system which everyone uses. Here in Seychelles, the bus system is reaching a lot of places ‒ we were surprised how good it is but obviously there are some limitations,” Mr Willimann stated.

“We not only asked them if they used the bus but also why they used the bus and we saw that many people said that they use the bus because it is a cheap mode of transport and if they could use something else, they would switch. What we can take from this data is that we need to improve the public transport system so that people will continue using the bus because they are space efficient […] and avoid the collapse of the transport system where everybody owns a car,” he added.

Seychellois Neela Ernesta from group six which was focussing on enhancing bus transport in greater Victoria, said their survey found that a significant number of people would be willing to pay a few rupees more if public buses improved on comfort, safety, reliability and availability of real time information.

“The project was a great experience and it helped us to develop our skills,” stated the young business administration student.

Group seven provided an engaging presentation on the feasibility of cable cars from Victoria to Beau Vallon.

“The aim of the project was to continue this collaboration which we started in 2016 for the first time when we worked on waste management. The idea is for students to learn how to analyse the problem, not only theoretically,” stated the director of TdLab ETH Zurich Dr Pius Krütli.

“It is a team research activity for the students to learn and at the same time we produced meaningful results,” added Dr Krütli.

In regards to how this preliminary case study will come into play with local authorities, the principal secretary for transport, Patrick André, said the study will add on to the current Victoria master plan which is currently being implemented and assist in improving traffic congestion, safety on the road and public transportation. 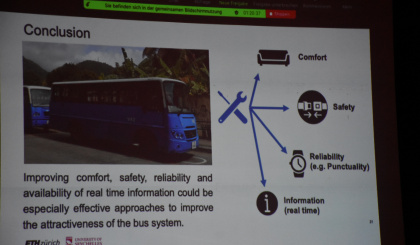 A slide with one of the findings (Photo: Joena Meme)