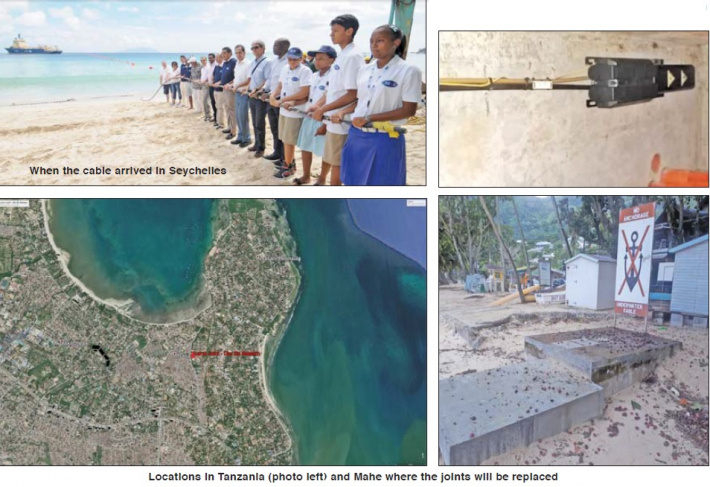 The second submarine cable to Seychelles which is under construction is expected to be operational early next year.

Mr Choppy said there has been a delay in the implementation of PEACE due to circumstances internationally. He said the system is expected to come into operation by the end of the first quarter of 2022.

The SCS expects the completion of its new cable landing station (CLS) this month and the start of installation of equipment from the manufacturer soon after. Its new station is located on Persévérance and is also where the PEACE cable system will land.

With the coming into operation of the PEACE system next year, the country will also have redundancy in its international submarine cable connectivity and thereby provide the much needed security in connection to the country.

Meanwhile, the SCS together with supplier Alcatel Submarine Networks (ASN) are to change two eroding joints on the land sections of the SEAS cable system this coming weekend, thus causing some interruption in its service.

According to measurements conducted in May 2021 by the SCS, it was determined that there is substantial signal degradation on the land sections of the SEAS cable system. The cause of the degradation is a land joint in the beach manhole (BMH) at Beau Vallon in Seychelles and a land joint in Dar es Salaam, Tanzania. The supplier, Alcatel Submarine Networks (ASN) confirmed that both joints have to be replaced as soon as possible as the signal is continuously degrading and it is highly probable that traffic will cease in a matter of a few months.

The SCS has expressed its regrets for the anticipated interruption in its service starting Saturday July 24, adding that it will be focusing on restoring its service as soon as possible the following day, on Sunday July 25, 2021.

It is a point-to-point system connecting Seychelles (Beau Vallon) and Tanzania (Dar-Es-Salaam) with a length of almost 2000km. It came into service on August 15, 2012 and is a system manufactured and installed by ASN (ALCATEL Submarine Networks).

The system is owned and operated by the SCS company. This is an SPV (Special Purpose Vehicle) comprising the government, Cable & Wireless (Seychelles) and Airtel (Seychelles).

The project also benefited from financing from the EIB (European Investment Bank) and the African Development Bank (AfDB). The vast majority of international telecommunications traffic (more than 90%) of the country is carried through the SEAS system presently.

The only alternative to SEAS is through the use of satellites.