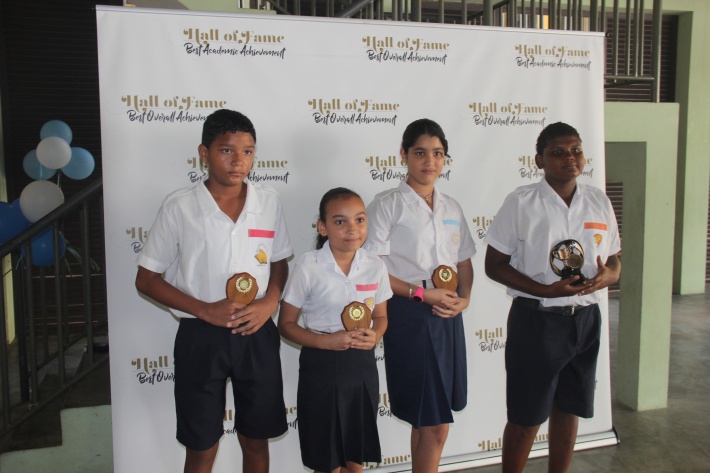 The Cascade primary school launched its Hall of Fame on Friday morning in a ceremony attended by the founder of the Hall of Fame project Georgina Dhillon, the MNA for Cascade, Charles De Commarmond, the director general for primary education Cyril Pillay, as well as students, teachers and parents.

Mrs Dhillon is the chief executive of the Rila Group, which ranks among the largest and fastest growing providers of medical and post-graduate education in the United Kingdom, delivering a wide range of educational projects internationally.

The students inducted in the school’s Hall of Fame are Jean-Philip Kilindo, who was awarded best overall for primary six national exams in 2018, followed by Samy Ibekwe who scored highest for science, Ella Prudence scored the highest for French and Kiella Labrosse.

“We are so privileged to be the first cohort. A special heartfelt thanks goes to our teachers parents and head teachers for having given us their unfailing support and providing us with a conducive environment in which our potential have been nurtured and developed through a wide variety of excellent learning experience,” said Jean-Philip.

He added that he feels extremely honoured to be the first student to be awarded best overall for Hall of Fame.

“I think that the Hall of Fame will be a good encouragement to students and motivate them to perform better,” Jean-Philip noted.

Ella Prudence also thanked her past teachers for all they did when she was about to sit for her national exam. She also thanked God and her mother.

“The Hall of Fame is there to push students to excel and reward them for all their hard work. It is a sense of motivation, for those who want to reach a high level of success,” said head teacher Barbara Medor.

Several schools have been honoured and today Cascade primary has joined the long list. Cascade school has progressed over the past two years, in 2016 twenty two percent of primary six pupils scored within the range A-C and in 2018 the school saw an increase of thirteen percent putting it at a pass rate of thirty five.

“To the parents, please congratulate your child as this is a tremendous achievement and your child should be extremely proud of their progress. To the teachers I wish to thank you for showing these children the path of learning to excel in different subjects and to the first cohort of the 2018 Hall of Fame continue to be lifelong learners, develop your potential to the fullest,” added the head teacher.

“I think the Hall of Fame is an important initiative for schools because you have this opportunity of igniting the student’s enthusiasm to make them feel that at the end of all that hard work in the class room there is a reward,” noted Mrs Dhillon.

She added that by rewarding a person you give them confidence in themselves and make them feel that it’s worthwhile putting in all that work.

“We have got another three schools next week on Praslin and another one on Monday at Mont Fleuri, we plan to initiate this programme in all 36 schools in Seychelles and we will focus on students who have achieved on a wide scale which includes sports education and other specific areas. We will also be looking at young entrepreneurs as well,” said Mrs Dhillon. 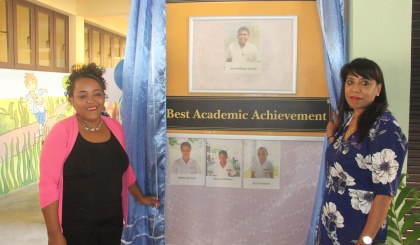