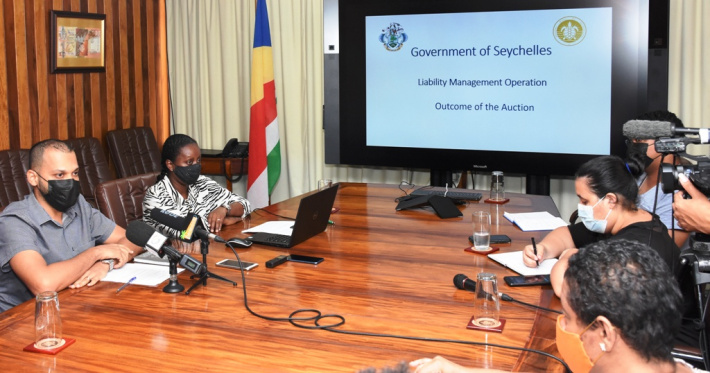 Central Bank of Seychelles and the Ministry of Finance, Economic Planning and Trade have expressed their satisfaction at the recent auction, held on July14, to convert treasury bills to bonds under the Liability Management Operation.

Approximately R1.217 billion worth of treasury bills of 182 days and 365 days that were expected to mature between August 1, 2021 and July 31, 2022, held by investors, were exchanged and converted into treasury bonds with longer maturity dates of three, five and seven years during this auction.

In a press update yesterday afternoon at the Central Bank of Seychelles (CBS) boardroom, director of the financial markets division at the CBS, Gina Rosette, noted that 75% of the overall sum was exchanged from 365 days treasury bills while the remaining were from 182 days bills.

The majority of these treasury bills, a whopping 98%, were being held by commercial banks and the Seychelles Credit Union and only 2% by individuals.

“The Liability Management Operation is part of our reform target under the International Monetary Fund (IMF) programme we are undertaking to try and restore our debts back on a sustainable path as it was prior to the Covid-19 pandemic outbreak,” explained Dick Labonte, chief debt analyst at the Ministry of Finance, Economic Planning and Trade.

As part of the country’s efforts to reduce its debts level, the Liability Management Operation is an IMF-backed initiative which has the objective of improving the country’s debt sustainability, reducing interest rates and refinancing risks.

These 182 days and 365 days treasury bills were one of these fiscal risks that needed to be refinanced since they were expected to be paid soon ‒ the first in a few weeks on August 1 and the next in July 3, 2022.

With R1.217 billion worth of treasury bills now converted to a bond that will be paid in the next three, five and seven years, this provides the government more time to pay the bonds.

“We are satisfied with the auction as we have been able to somewhat reach our target interest rate which was 5.75% on the three-year bond, 7% on five years and 8% on seven years,” noted Mr Labonte.

Prior to the exchange of the R.1217 billion from treasury bills to bonds, the country counted a total of R6.6 billion worth in treasury bills.

Mr Labonte explained that the decision taken by the government and the IMF to extend treasury bills into bonds will help the country as it transits into the IMF economic recovery programme, and create sustainable debts in the medium term.

“We are running on a budget deficit at present but our forecasts have predicted a surplus in the next three years, so the country has some reassurance that it will be able to pay off the treasury bonds at that time, when the economy is more stable, compared to now. With treasury bills however we would have had to reissue new treasury bills as and when old ones matured, and these already had a high interest rate,” he concluded.