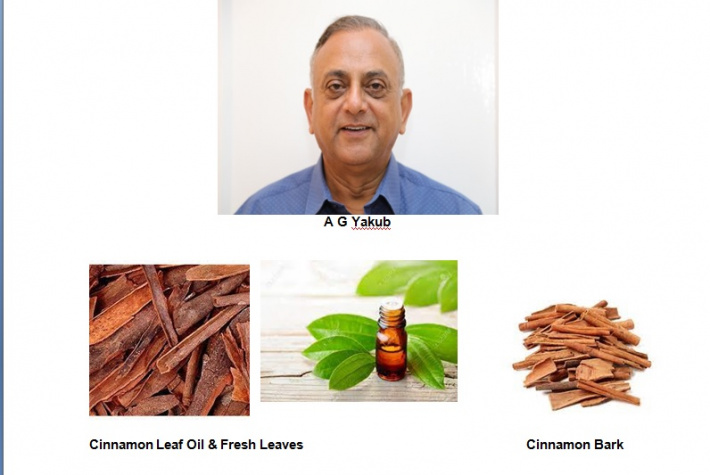 Following the programme about cinnamon production in Seychelles aired on Seychelles Broadcasting Corporation on Sunday night, it is hoped that this well presented article by A G Yakub will provide a good insight into the subject with a view to distinguish between the cinnamon available in Seychelles and the cassia cinnamon produced elsewhere.

The history of cinnamon is as rich as the island it came from. The cinnamon tree is native to Sri Lanka, formerly Ceylon. The plant was introduced to Madagascar in the 17th century by sailors crossing the Indian Ocean on their trading routes. Today, cinnamon grows in many areas of Madagascar, with the most producing areas found within the Atsinana and Analanjirifo provinces.

In the case of Seychelles, the Ceylon cinnamon was introduced in the 18th century by Pierre Poivre (1719-1786) along with other spice plants. Pierre Poivre was a French naturalist and administrator who was committed to growing spices in Seychelles. He was determined to break the Dutch monopoly on spices in the Indian Ocean at the time when spice trading was an important source of colonial wealth.

The historical data on the production and export of cinnamon in Seychelles seems rather patchy. But at least the figures belowprovide us with a snapshot of just how much cinnamon was an integral part of our cultural heritage in the bygone days:

In the colonial times,virtually the whole of cinnamon was self-sown and untended in Seychelles. Large landowners traditionally employed young women to harvest the cinnamon leaf. 1951 was a boom year for cinnamon leaf oil but there was a sharp drop in prices in 1952. There were some 65 distilleries producing leaf oil at the time.

Cinnamon bark and leaves were harvested by coppicing the bushes at a convenient height for axe or bush-knife, stripping the leaves for the distilleries, and slicing the bark from the wood for drying. The stripped wood or branches were used as fuel in the distilleries. Due to competition from other products, the export of cinnamon bark has tended to supersede that of leaf oil.

History teaches us that cinnamon was employed as a fragrance in the embalming process by Egyptians. It assisted medical treatments in medieval times and it was used as a natural preservative for meats between the 5th and 15th century. But the source of the sought-after spice was not yet known to the Europeans. So, explorers, including Christopher Columbus, set out on a discovery mission.

It wasn’t until the 16th century that the Portuguese found the source of true cinnamon on the island of Sri Lanka. Between 1597 and 1658, a substantial part of the island was under Portuguese rule. But the Portuguese lost their possessions in that country due to Dutch intervention in the Eighty Years' War. The Dutch East Indies Company seized the trade from the Portuguese and from there it changed hands multiple times from French to Dutch to British.

How was cinnamon transported?

Cinnamon plants were transported by sea. The actual cinnamon bark and chippings were packed in gunny bags and loaded onto shipping vessels sailing up and down the vast Indian Ocean.

In the case of cassia, it is reported that Indonesian rafts transported cinnamon on a “spice route” to the coasts of East Africa. From there, local traders then carried the cinnamon north all the way to the Roman market.

It is said that adventurous Arab sailors sailing in dhows, notably from Oman, also ventured further east to take part in the spice trade. Arab traders brought the spice through trade routes into Egypt, where it was bought by Venetian traders from Italy who once held a monopoly on the spice trade in Europe. To Italians, cinnamon is known as canella (or cannon) in their language.

The cinnamon that is produced in the Indian Ocean region of Sri Lanka, Madagascar and Seychelles is known in Latin as cinnamomum verum (True Cinnamon); it issometimes calledcinnamomum zeylanicumwhich is commonly referred to as Ceylon cinnamon because of where it originally came from. There is no difference between the two. It’s simply two scientific names for the same type of cinnamon.

Navigating the world of cinnamon can be confusing to some. Deciphering the different types of cinnamon based on their physical properties and flavours can be tricky. What is important to understand is that the true cinnamon found in Seychelles, Sri Lanka and Madagascar is different from cassia cinnamon which comes from Indonesia, South China, Myanmar (Burma)and Vietnam.

Cinnamon is also cultivated in South America and the West Indies.

Cassia cinnamon is darker in colour and has a harsh flavour compared to our ‘true cinnamon’whose dried inner bark is lighter brown in colour, with a subtle yet warm, sweet taste and a spicy or delicately fragrant aroma that can’t be matched by cassia.

In fact, in the beloved William Shakespeare classic, Romeo & Juliet, when Juliet proclaimed “a rose by any other name would smell as sweet”, it is said that she was referring to none other than the sweet, warm, aromatic true cinnamon that is found in our Indian Ocean region.