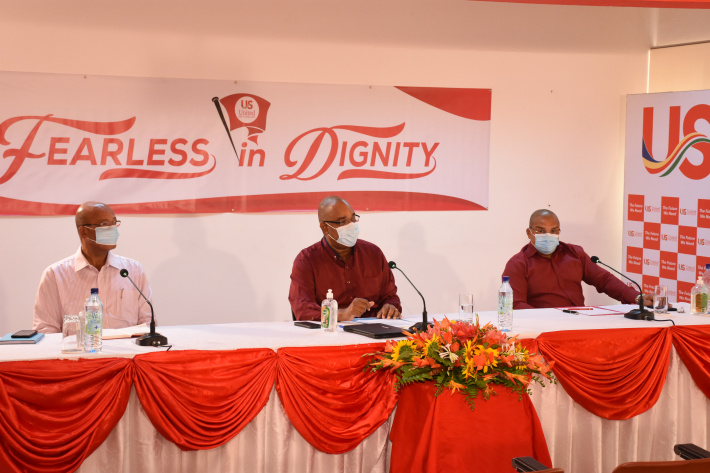 Opposition party, United Seychelles, has criticised the actions being taken by the government regarding the reforms with the International Monetary Fundand other matters of concern like the failed bomb attempt, Air Seychelles and abuse of power.

These criticisms were made during the United Seychelles’ (US) seventh live press conference held yesterday at the party’s headquarters at Maison du Peuple.

Dr Patrick Herminie, the US party leader, expressed his dissatisfaction with the way the International Monetary Fund (IMF) reform is being conducted, pointing out that not enough information is being shared on how the reform will be carried out.

He noted that the IMF acknowledged that Seychelles’ economy before the pandemic hit in March 2020 was performing better than ever and Seychelles had a surplus of cash to pay its debt.

“United Seychelles feels that there has not been enough consultation with economists and politicians on how the IMF reform will be implemented and the government is conducting its operation in an autocratic way and is forcing this reform on the Seychellois people,” said Dr Herminie.

He went on to note that this reform is very dangerous and will bring a bigger financial crisis in three years’ time.

He continued by explaining that the government's decisions to convert treasury bills into treasury bonds will not reduce domestic debt but rather postpone payments.

Furthermore, he added that United Seychelles has even more reservation against the reform as they don't know how many people will be made redundant once it becomes effective. He added that they do not know if salaries will be reduced and if so by how much.

“The government is telling the public to be more mindful of their spendingbut will the government continue with its capital projects that are costing an estimated R700 million?” questioned Dr Herminie. He continued by questioning the types of reforms the government plans to implement in the health and education sectors and if the means will justify the end.

He went on to questionthe authenticity of the rumours that Air Seychelles is closing its doors.

Following this statement, Dr Herminie told the press that the issue of the IMF will be the main topic of the next press conference in August after they get access to the IMF report and the measures put in place are cleared up.

He further highlighted that they will not support the project if it means the rich will get richer and the poor get poorer.

For his part, the party’s deputy leader Jacquelin Dugasse said the actions being taken by the government makes it evident that it has no intention in saving Air Seychelles.

“The government needs to take a stand regarding Air Seychelles and tell us once and for all what they are going to do moving forward, because we, United Seychelles, see the airline as an insurance policy for our country and for the tourism industry,” stated Mr Dugasse.

He added that Air Seychelles is not an economic issue but a political one and that it will be a bad idea to close it down.

Dr Herminie went on to touch on the allegedfailed bomb attack last month by saying the United Seychelles condemns all forms of terrorist acts.

He remarked that for the president to say that the attempt was politically motivated was irresponsible, especially since investigation is still ongoing.

“This shows that the situation is being milked for political gains, not by United Seychelles but by Linyon Demokratik Seselwa,”said Dr Mr Herminie.

Another incident that has been dominating the news this week is the alleged beating of three young men at Hangard Street. Dr Herminie alleged that this was the doing of people working at State House.

As for the changes regarding the Pension Fund, United Seychelles’ secretary general Dick Esparon noted that not enough information has been divulged for them to have a clear opinion on the matter.He added that United Seychelles believes in a universal concept of pension where someone works and plans his/her pension accordingly.

He added that more discussions must be made regarding the amount of contributions pensioners should make as well as the age at which they should receive their pension.

Recently, the president spoke on

In a recent interview on China Global Television Network’s Dialogue programme, the president stated that soon the government will begin placing restrictions on people who have not been vaccinated and Dr Herminiehas said this is not ethical as we cannot impose this on an individual.

“The president cannot impose this on the Seychellois people as it will have negative consequences,” said Dr Herminie.

Dr Herminie also stated that the president’s visit to Austria was simply a waste of taxpayers’ money and the discussions should have been done virtually as many other world leaders did.

Regarding the issue faced by musicians in Market Street, he said they should be allowed to play their music at an acceptable volume.

Regarding an issue in Assembly when the leader of the opposition Sebastien Pillay and Hon. Audrey Vidot were expelled, DrHerminie stated that an MNA of LDS made false accusation towards a US member and the Speaker alleged that he did not hear it.