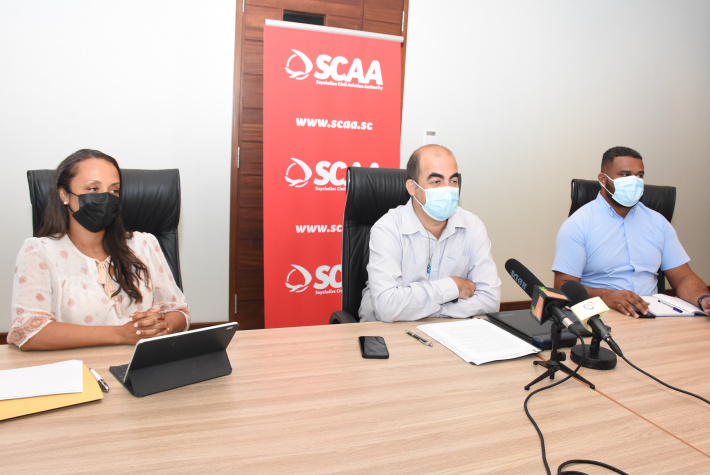 The Seychelles Civil Aviation Authority is satisfied with the level of activities at the   international airport since it re-opened on March 25 to welcome back foreign visitors and different airlines.

General manager for airport management, Colin Chang Tave, said the Seychelles Civil Aviation Authority (SCAA) is also satisfied with the running and functioning of the Seychelles International Airport following the removal of some Covid-19 restrictions to allow foreign passengers to enter the country.

Mr Chang Tave made the statement in a press conference held yesterday morning at the conference room of the domestic terminal to give an update on the airport’s situation and operations.

Also present during the meeting with the press were Florence Marengo, general manager for commercial, and Dyan Vidot, aviation security manager.

Mr Chang Tave stated that with the airport’s activities and international traffic going on a complete standstill in April and May 2020 following restrictions due to the pandemic, it has slowly picked up and today the airport is welcoming on average six international flights per day which is half of the normal flights that landed per day before Covid-19.

Apart from Air Seychelles which is operating regionally to Dubai and Tel Aviv amid carrying out its chartered flights, other airlines operating in Seychelles at the moment are Emirates Airlines and Qatar Airways on a daily basis, Aeroflot, Ethiopian and Etihad Airways flying four times a week, Turkish Airlines is coming in with two flights per week and Edelweiss which has resumed its flights this month with one flight per week. The Seychelles International Airport also welcomed back Kenya Airways on Monday July 12 with 49 passengers on board but it is expected to operate two flights per week.

Mr Chang Tave noted that among the airlines coming back to Seychelles, Aeroflot, following an absence of 17 years, is doing very well as a newcomer where it has increased its intended two flights per week using an A330, to four flights per week and using a much bigger plane. He stated that Emirates Airlines has also added two additional flights, thus bringing the total to nine flights per week and it has also been authorised to operate a 10th flight per week as of August 2021.

He reminded that Emirates Airlines was operating 14 flights to Seychelles before the pandemic.

He explained that with EI Al, the Israeli Airlines, temporarily suspending its flights to Seychelles until September 2021 due to the pandemic, our national carrier, following the closure of routes to Mauritius and India, has also reduced the number of flights to Israel as a result of the pandemic. He said the Saudi Arabian Airlines will also be operating some chartered flights to our shores as from this month.

With regards to the operations of the airport, Mr Chang Tave said there have been changes in trends regarding congestions, especially to flights arriving in the mornings. He explained that before, most of the flights coming in in the morning were one upon another, causing congestion and now this has been reduced due to planed procedures that has allowed the planes to arrive an hour apart, which also fits the health measures in place.

Furthermore, Mr Chang Tave added that the only challenge is the shortage of space to park big airplanes in the morning and to assist them when they leave at night as they all leave the country at mostly the same time.

Mr Chang Tave said the Travisory clearance procedure in place for passengers has made it possible for the health authorities to clear 100 passengers in 13 minutes as compared to the 55 minutes it took to clear the same 100 passengers before it was introduced.

He added that the SCAA has also reorganised traffic circulation at the airport while providing better facilities to tenants and passengers.

Elaborating on SCAA’s revenue and statistics, Florence Marengo, general manager for commercial, explained that since the reopening of our borders to travelers, the authority has been able to recover some revenue to cover its expenses. She said the authority has been collecting on average R21 million in revenue since April 2021 compared to R42 million on average every month before the pandemic hit the country. She noted that with new developments in air transportation, the authority has made a forecast to collect R30 million in revenue every month from October 2021 if everything goes well.

With regards to expenses, Ms Marengo said the SCAA is spending R20 million per month as compared to R25 million before the outbreak of the pandemic. She noted although the R20 million in spending can still be considered high in this times of restructuring and budget cuts, this is because the SCAA is a labour intensive organisation in terms of assisting its 800 plus employees and also capital intensive in terms of maintenance.

Speaking about passengers entering the country, she said to date 62,805 passengers have entered via the airport, a 40% drop to the 104,087 passengers who arrived in Seychelles in 2020.

She added that at the moment only 500 passengers are disembarking in the country on a daily basis compared to 1,000 before Covid-19.

She further added that with new developments in regards to international flights coming in, the country may have its 1,000 disembarking passengers to end the year with between 140,000 and 175,000 passengers.

She said before Covid-19, 400,000 plus visitors arrived through the Seychelles International Airport.

Ms Marengo stated that the SCAA, as a running business, has apart from collecting revenues from rents, pay parking among others collected operating fees, has made a subvention of R15 million towards its tenants in relation to the pandemic.

She concluded by saying that the SCAA will continue to improve its facilities for the benefit of its customers.

Among new services being provided at the airport is the RT-PCR test and antigen test for travelers, businesses and members of the public in general at the Payanke VIP Lounge.