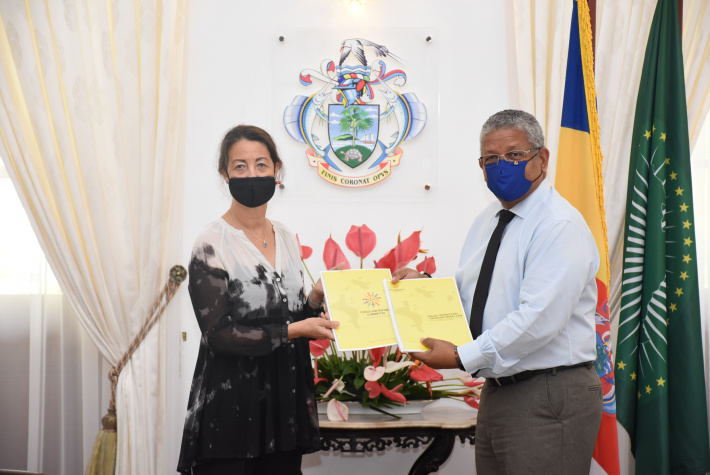 Justice Twomey hands over a copy of the report and Model Law to President Ramkalawan (Photo: Thomas Meriton)

The report, ‘Enhancing Child Protection in Seychelles’, represents the culmination of extensive research, deliberations and considered reflection by the CLRC members and the CLRC technical committee since its creation in June 2020.

There are 11 chapters in the new Sexual Offences Bill Proposed Model Law and for the offence of rape, the sentence proposed is life imprisonment.

• Defining the new statutory offence of rape applicable to all forms of sexual penetration without consent, irrespective of gender;

• Defining consent and other relevant concepts;

• Repealing the offence of indecent assault and replacing it with a new statutory offence of sexual assault, applicable to all forms of sexual violation without consent;

• Creating new statutory offences, for adults, by criminalising the compelling or causing the witnessing of certain sexual conduct and certain parts of the human anatomy, the exposure or display of child pornography and the engaging of sexual services of an adult;

• Enacting comprehensive provisions dealing with the creation of certain new, expanded or amended sexual offences against children and persons who are mentally disabled, including offences relating to sexual exploitation or grooming, exposure to or display of pornography and the creation of child pornography, despite some of the offences being similar to offences created in respect of adults as the creation of these offences aims to address the particular vulnerability of children and persons who are mentally disabled in respect of sexual abuse or exploitation;

• Avoiding criminalising the conduct of children, particularly in the context of sexual offences and image based offences;

• Criminalising any attempt, conspiracy or incitement to commit a sexual offence;

• Creating a duty to report sexual offences committed with or against children or persons who are mentally disabled and criminalising failure to report;

• Providing the Seychelles Police Force with new investigative tools when investigating sexual offences or other offences involving the HIV status of the perpetrator;

• Providing the courts with extra-territorial jurisdiction when hearing matters relating to sexual offences;

• Providing certain services to victims of sexual offences, inter alia, to minimise or, as far as possible, eliminate secondary traumatisation, including affording a victim of certain sexual offences the right to require that the alleged perpetrator be tested for his or her HIV status and the right to receive Post Exposure Prophylaxis in certain circumstances;

• Establishing and regulating a public national register for sex offenders;

• Further regulating procedures, defences and other evidentiary matters in the prosecution and adjudication of sexual offences;

• Making provision for the adoption of a national policy framework regulating all matters in this Act, including the manner in which sexual offences and related matters must be dealt with uniformly, in a co-ordinated and sensitive manner, by all government departments and institutions and the issuing of national instructions and directives to be followed by the law enforcement agencies, the national prosecuting authority and health care practitioners to guide the implementation, enforcement and administration of this Act in order to achieve the objects of the Act; and

• To provide for matters connected therewith.

Work of the CLRC

“The establishment of the CLRC was largely as a result of public outrage when the case of R v ML and Or was publicised. But many of us who have worked in the area of child sexual abuse have on numerous occasions articulated our concerns and written about the issue. For many years in my work as a judicial officer, I have been extremely moved by the experience of child victims of rape, sexual abuse or sexual violence in Seychellois courts and tribunals. Existing laws and procedures, on the whole, do not permit judicial intervention to ensure the respect and dignity of children and other victims of sexual assault. Our criminal justice system is too often a source of further distress for victims of sexual violence. I have watched in horror the behaviour of lawyers when cross-examining victims of sexual violence. Equally, I have sat with a bowed head listening to some of my colleagues on the bench criminalising victims of sexual abuse. Yet, we all want to see justice done and to work without harming anyone as our professional duties and ethics require of us,” noted Justice Twomey.

The CLRC was set up in June 2020 under the recommendation of the former President Danny Faure. The committee met quite regularly physically and online due to restrictions of movement.

“The members of the CLRC are experienced professionals with specialist knowledge in all the attending sectors relating to child sexual offences and sexual offences generally. They are persons who are at the coalface of this social scourge and continue to help and support child survivors, and their families, recover and heal from the all too devastating impacts of sexual offences. They provide medical, psychosocial, investigative and case management and/or health services for survivors. In their work on the CLRC, they bring a much-needed fresh and practical approach to dealing with sexual offences,” explained Justice Twomey.

“These professionals worked unpaid, tirelessly, mostly after office hours while balancing their overburdened tasks in their different jobs. I am truly grateful to them. The members of the technical committee headed by Alan Wallis worked ceaselessly in the background, also unpaid, taking little credit while doing the comparative study in the area and providing the CLRC with their findings and recommendations as to best practices and model provisions. Their presentations at the beginning of our work were insightful and valuable in mapping the Seychellois legal landscape and setting signposts for our work. They guided us around solutions adopted by other jurisdictions in meeting similar obstacles in this difficult area of law. They drafted the Model Law with no software applications at their disposal and with little drafting experience. Alan drafted the Report carefully, taking cognisance of all the steps and discussions involved in the review process and documenting them. To the technical committee, especially Alan, Olya Hetsnan and Emily Gonthier, the CLRC and the Seychellois nation owe a debt of gratitude,” Justice Twomey said.

“This report and model law is hopefully the beginning of a journey in enacting a Seychellois dedicated law for sexual offences that adopts best practice while taking into account the particular circumstances of our islands. Let the journey begin and end as quickly as possible and let the recommendations of the CLRC soar beyond another dusty shelf report,” concluded Justice Twomey.

President Ramkalawan noted that the committee still has a lot of work to do. Now the proposed bill will be sent to the cabinet of ministers for approval before going to the National Assembly for debate. 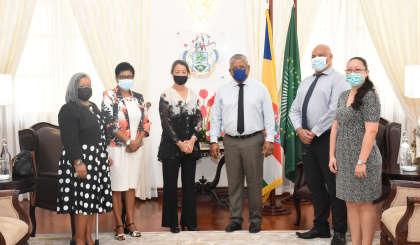 Members of the CLRC in a souvenir photograph with President Ramkalawan (Photo: Thomas Meriton)