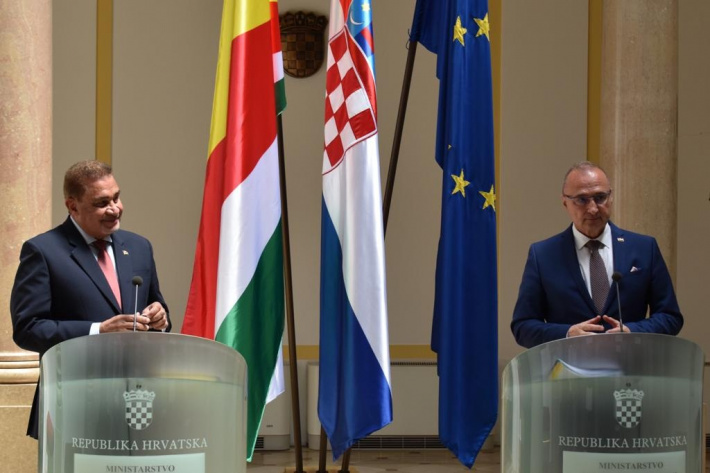 “We’re relooking at our foreign policy,” said Minister Sylvestre Radegonde in Zagreb, Croatia on Tuesday July 6, when wrapping up his three-nation tour of Central Europe.

Seychelles’ Foreign Affairs and Tourism minister made these remarks during talks with the Croatian Minister for Foreign and European Affairs, Dr Gordan Grlic Radman, and that for Tourism and Sports, Nikolina Brnjac.

Minister Radegonde, who was in the Croatian capital on the last leg of his tour of Central Europe – which had earlier taken him to Austria and Hungary – met his two Croatian counterparts at the Ministry of Foreign Affairs. After a tête-à-tête, the three ministers were joined by the rest of their respective delegations in a working lunch in Svecani Salon before the two top diplomats met local media to deliver a joint press statement.

Minister Radegonde’s visit was the first official trip to be undertaken by a government minister of either country in the other’s country since they established diplomatic relations on September 30, 1997.

He said relations between the two countries “have been cordial since,

but, admittedly, they have not developed to the level that both of our countries have expected”.

He expressed appreciation for “the commendable contribution of Croatia in maritime security”, notably through operation Atalanta undertaken by the European Union Naval Force (EUNavfor) which “has been instrumental in tackling piracy off the coast of Somalia”.

He remarked that Seychelles and Croatia “share a commonality of views and interests on a number of issues, ranging from democracy and human rights, the rule of law, to the protection of the environment, including combating climate change”, adding that during their tête à tête they explored “the possibility of harmonising” the two countries’ views on these matters and that his visit “will usher in a new chapter” in the bilateral relations between the two countries.

He singled out “tourism and the hospitality industry, education,

capacity-building and sports” as particular areas of cooperation with Croatia.

He also noted that Seychelles’ honorary consul in Zagreb will have “a crucial role to play” in boosting this bilateral relationship and to “elevate our presence and visibility in Croatia”.

During the working lunch, Minister Grlic Radman said it is “not difficult to reinforce relationship between the two countries” as they “share a lot in common” and have similarities stemming from the fact that both are “maritime and democratic nations that are popular touristic destinations”.

He added that these similarities generate experiences that the two countries can share and create space and scope for bilateral cooperation in fields like “blue economy and protection of the environment”.

He expressed hope that the bilateral cooperation could also translate into a boost of trade between the two countries.

The two countries also agreed to extend their bilateral cooperation to international fora. To this end, Minister Radegonde pledged the support of Seychelles for Croatia’s candidature to the Executive Council of the United Nations World Tourism Organisation (UNWTO) and for

Jasminka Dinic’s bid to be re-elected to the United Nations Committee on Contributions.

He said that Croatia’s request of support for her candidatures for a seat on the Human Rights Council for the period 2022 to 2024 and a non-permanent seat on the UN Security Council are under consideration.

Minister Radegonde also explained that Seychelles has learnt many lessons from the fight against piracy and one of these is that Seychelles shouldered a greater share of the burden of fighting piracy.

He added that with the broadening of EUNavfor’s mandate to cover other maritime threats, Seychelles expects other countries that benefit from greater maritime security in Western Indian Ocean to share in that responsibility.

He said Seychelles is counting on the support of Croatia to convey this message in EU decision-making organs whenever such issues are raised.

Minister Brnjac explained that her country is looking forward to chairing the UNWTO’s sustainability committee.

Minister Radegonde, for his part, said that Seychelles is looking into diversifying its tourism base into cultural tourism to get tourists, for instance, to learn cooking Creole dishes and gain firsthand experiences in some traditional economic activities like using fish traps.

The three ministers also discussed Croatian scholarships for Seychellois students with Minister Radegonde emphasising that two of these scholarships should be earmarked for those who want to study hospital administration.