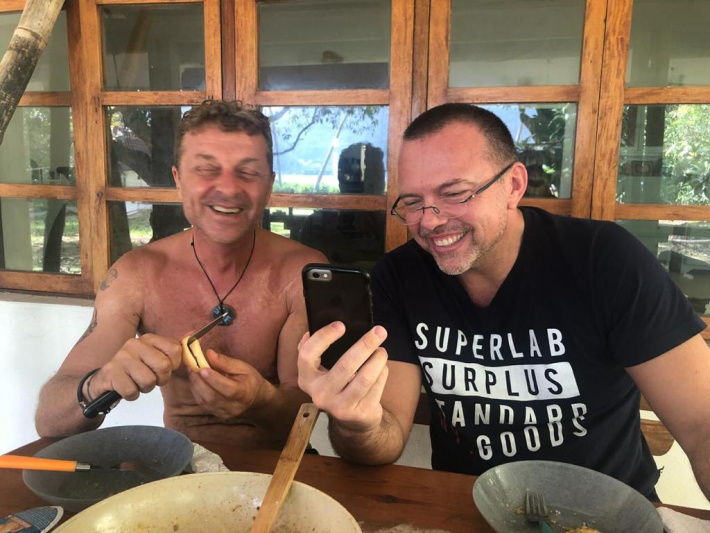 Messrs Drosi and 'Junior', the brains behind the project

After much negotiations and discussions with the authorities, local adrenaline junkies will finally experience the rush of skydiving which will soon be available in the country.

Skydiving is the sport or activity of jumping from an aircraft and performing acrobatic manoeuvres in the air under free fall before landing by parachute.

It can be done individually and with groups of people, while training is required.

Unlike most paratroopers, skydivers often wait until they are low, before opening the parachute.

Longer free fall times can be achieved by exiting an aircraft at altitudes much higher than 4,000m, but very high jumps require pressurized oxygen within the aircraft and bottled oxygen for the diver.

During a skydive, total freedom and control of the air can be enjoyed as well as many complex and spectacular manoeuvres including flat turns, somersaults and formation skydiving.

The initiative behind the local project

The brain behind the idea to bring skydiving to the local shore is Francesco Drosi who made his first skydive while serving in the Italian military in 1986.

Seychellois of Italian origin, Mr Dorsi first came to Seychelles in 1996 where he settled, before joining the Trades Tax Division in the year 2004.

He has travelled to numerous places around the world, performing skydiving whenever opportunities present themselves.

It was during his travelling adventures that the idea of bringing the activity to Seychelles clicked.

While on a skydiving vacation in Kenya, Mr Dorsi met his now business partner Gabor Viczko, a Hungarian-American who is a successful entrepreneur and also passionate skydiving hobbyist.

The former shared his dream of introducing skydiving in Seychelles and how he wanted to share his love for the sport with the country he called home, and together the men envisioned something new and exciting for the country.

With skydiving becoming more popular especially in places like the United States, China and Dubai, they realised that it would be a way to increase tourism, as well as offer skydivers from around the world a new and beautiful place to jump.

Having had the vision and the plan, they feel that they needed to bring in someone with an intimate knowledge of the skydiving industry.

Bringing on the big guns of the sport

To fine-tune the project, they decided to bring on David ‘Junior’ Ludvik as their skydiving and safety consultant.

American-born Junior has travelled the world competing, as well as consulting on new skydiving businesses.

He is a skydiving veteran with over 18,000 skydives stretched over 23 years, steering him to become one of the leading instructors in the skydiving industry, and most recently he won the first ever World Championship in freestyle canopy piloting.

He is a former skydiving world champion and a four-time Guinness World Record holder.

He is also a fully certified multi-rated Instructor Examiner, a Federal Aviation Administration (FAA) certified parachute rigger, and a Safety and Training Advisor for the United States Parachute Association.

It took nearly two years for the team to get the appropriate permissions and gears needed to start the operation.

In addition to his adrenaline junkie antics, he’s an award-winning photographer, aerial videographer, avid hiker, and someone who has a real thirst for life.

It was on Sunday July 4, 2021, the day the Seychelles Civil Aviation Authority (SCAA) celebrated its golden Jubilee that the Fly Seychelles Skydiving Centre made the first non-military parachute jumps over Praslin Island.

According to Mr Drosi, they have multiple events planned already and their doors should be open to the public soon.

Who can, and how to skydive?

Fly Seychelles Skydiving Centre will start off by only offering tandem skydiving jumps to local Seychellois and tourists as a recreational activity.

Later, the plan is to offer instructional jumps allowing interested people to learn how to skydive on their own, well with the help of skydiving instructors of course.

Anyone interested in jumping must call to book an appointment.

The facility or “dropzone” in skydiving terms is located on Praslin Island at Côte D’Or Lodge where customers will show up to their scheduled appointment.

Once at the facility they will fill out the registration paperwork, and watch a waiver video.

When it is time for their skydives they will meet their highly experienced certified instructor who will go through the entire jump process with them, giving them time to ask questions.

Customers should plan to spend half of the day.

Once at the airport, the instructors will check the fittings of the harness, inspect the parachute container again.

They will be then escorted to the aircraft where they will experience a 20-25-minute scenic airplane ride while the aircraft climbs to the jump altitude located between 11,000-14,000 feet above the ground.

Just before the jump altitude the instructor attaches the customer to the parachute system they are wearing, verbally goes over the jump sequence again, turns on the camera, checks they are over the landing zone, checks with the customer, and take a small step into the clean air with the beautiful view of the entire island.

The free-fall will last about 1 minute before the instructor opens the parachute.

The scenic parachute ride lasts about 5-7 minutes before they land safely on the beach where they started.

It is to note that during the tandem jump, the jump master is responsible for the stable exit, maintenance of a proper stable free fall position, and activation and controlling the parachute.

A brief history of skydiving

In 1797, Andre-Jacques Garnerin made a successful parachute jump from a hot-air balloon.

The military later developed parachuting technology first as a way to save air crews from emergencies aboard balloons and aircraft in flight, and finally as a way of delivering soldiers to the battlefield.

The jump that revolutionised the sport was done by Leslie Irvin near Dayton, Ohio, USA in 1919, as he completed the first ever free-fall jump using his own hand-operated chute.

The sport had a hard time taking off when it picked up steam in the 1930s because the Federation Aeronautique Internationale (FAI) would not accept it as a sport.

In the 1950s the FAI finally recognised it as an aeronautical sport, and the modern sport of skydiving was born.

Since those early days of jumping out of airplanes, skydiving technology and safety have both come a long way.

Each parachute system is now equipped with two parachutes, with one used for normal skydives, while the second parachute is only used in the event of an emergency.

In the event that the 1st parachute become twisted or does not work as intended, the skydiver can pull a handle detaching the bad parachute.

By pulling another handle, the reserve/backup parachute is deployed.

In the unfortunate event that a skydiver loses track of their altitude, or is accidently knocked unconscious somehow, this device automatically deploys their reserve parachute when descending through a preset altitude saving their life.

The training methods have also improved greatly over the years with an emphasis on safety. Statistics show that skydiving is safer than riding a bicycle, and that you are more likely to be attacked by a shark before getting killed jumping out of a perfectly good airplane.

With that being said, if you happen to find yourself on Praslin Island and are feeling a little adventurous, call Fly Seychelles Skydiving Centre +248 2639300 or book online at www.skydive.sc and let their team show you what it is really like to fly. 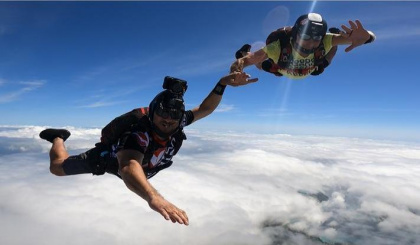 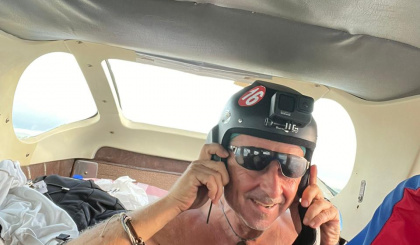 Mr Drosi getting ready for the skydive