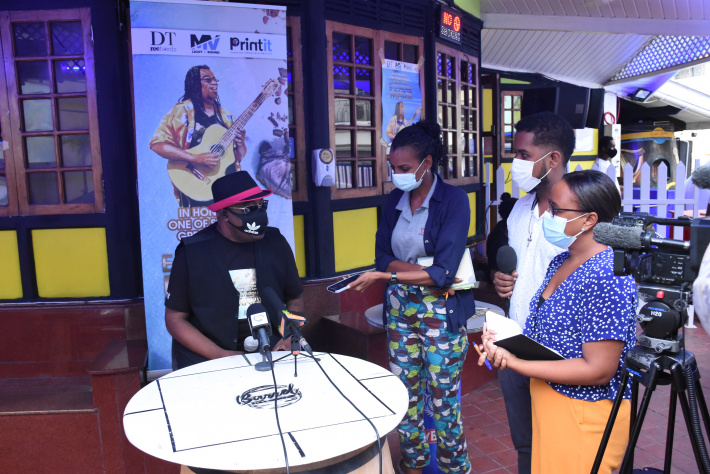 An album in honour of one of Seychelles’ most celebrated vocalists Emmanuel Marie has hit the market, following an official launch ceremony held at the Barrel Bar and Nightclub last Friday evening.

The album, realised by DT Rechordz, MV Light and Sound and Printit, has seen the collaboration of numerous artists, musicians and partners to put together the 23-song piece in celebration of Mr Marie’s contributions towards local music and most importantly to raise funds for the sensational singer whose health took a turn for the worst in recent years.

Speaking to the media at the launch event, Mr Marie said he is delighted to have the support of so many players in the industry for the album titled ‘In honour of one of Seychelles’ greatest artists Emmanuel Marie’.

“It took us a good while – two years because of the Covid-19 pandemic. The project started two years ago and we faced some delays in securing sponsorship due to the pandemic, but we are finally ready to go. The idea behind the project was to raise funds to finance my medical care as I was still residing abroad at the time, and medical treatment overseas is costly. Now that I am back, however, the funds raised will be used for the same purpose which is for my medical treatment,” he noted.

The songs featured on the album are all Mr Marie’s compositions, most of which are well-known which include the likes of ‘Mersi’, ‘Fo Zanmi’, ‘Rann mwan mon tofi’ and ‘Retourn ek li’. The hits are interpreted by a selection of artists, namely, Taniah, Mayos, Mervin Camille, Billy and Erica Rangasamy, Jahrimba, Vurna, Pti Garry and Elijah to name but a few.

Although fans will be familiar with most of the songs, Mr Marie has himself sung and recorded the last song featured on the album, entitled ‘Remersiman’, a small act of gratitude towards all those who have supported him on the project and through his health problems.

Through proceeds raised from the album sale, Mr Marie hopes to be able to start procedures towards regaining his vision and to address other health complications.

He promises however to return to the studio and produce more music for his fans and his own personal pleasure.

“I already have projects that were lined up but with my health problems, they have been delayed. Once I have the finances or if anybody wants to sponsor me for any new projects, I am ready to churn out some new things.”

Mr Marie and his production team were at the Barrel Bar and Nightclub throughout Saturday to sell copies of the album.

A young Emmanuel started dabbling in music at the tender age of 14. Having left the National Youth Service (NYS) in 1982, it wasn’t long before he joined bands and started performing in hotels and such establishments. It was in 1997 that a young Marie was scouted by a sponsor in Dubai after discovering Marie at the Miss World pageant held in Seychelles.

Marie left Seychelles for Dubai in 1998 where he was mainly focused on performing and was even lucky to travel to many countries to perform for different audiences. 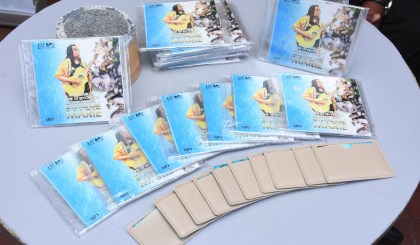