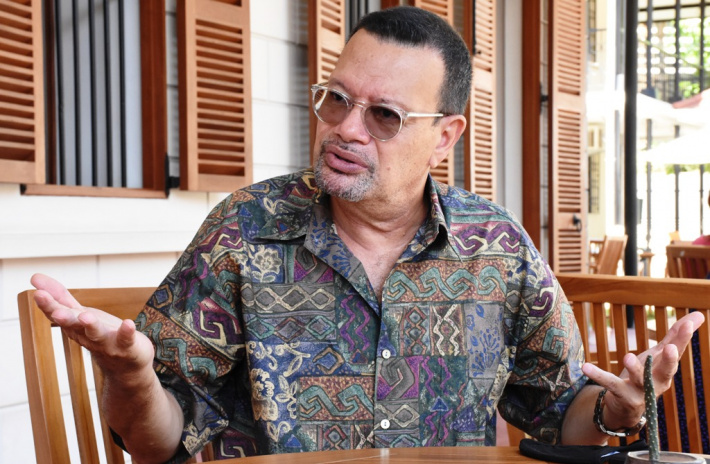 It all started with him writing reports on boxing which was very popular and at its best here in the early 1970s.

“As a student I have always enjoyed reading and writing in English and as I was working as an intern with the newspaper which was called Seychelles Bulletin at that time, I wrote articles about boxing,” Ronny Jumeau recounted when I caught up with him last week to get him to retrace his career journey with the Seychelles NATION to coincide with the 45th milestone anniversary of the newspaper.

Mr Jumeau, presently a private consultant in ocean, blue economy, small islands and environment matters, recalled those days when his father was at one time the chairperson of the Seychelles Boxing Association so he too followed the sport and even wrote articles about the fights.

“I recalled nobody was covering the sport for the paper so I reported on boxing matches and I enjoyed it and my writing caught the eyes of Antonio Beaudouin who was the director of information at that time as well as another Englishman working with the paper then,” Mr Jumeau remembered.

“I’ve always enjoyed writing in English and it was something I was really good at,” Mr Jumeau recalled, reminiscing about his school days at the Seychelles College where he said he enjoyed English literature and always received praises from his lecturers.

It is to be recalled that on June 29, 1976 the four-page black and white only newspaper then called Seychelles Bulletin became NATION and its number of pages increased to six.

It was two years later, in 1978, that Mr Jumeau, who would later become a minister and subsequently an ambassador, joined the newspaper as a full-time reporter.

“When I returned to Seychelles from university soon after the coup d’Etat, Mr Beaudouin knew I was back because he was close to my family and he asked me to come and work for the paper,” Mr Jumeau recalled.

He said at that time he had no training in journalism because he studied law and had always been interested in international relations and writing, but he read a lot of books on journalism to educate himself on the different journalistic styles and how to write good articles leaving all the details for the last paragraphs, bearing in mind that if it happened that the printers find the articles were too long, they would just chop off the last few paragraphs and not affecting the stories.

“So I brought my writing style of short, simple sentences and short paragraphs to the newspaper,” he said.

Mr Jumeau wrote for the newspaper on a full-time basis from 1978 until he left in 1991.

For 13 years he witnessed the paper’s transformation from when it changed from an evening edition to a morning one. The first morning edition of NATION came out on November 19, 1979. Its number of pages increased to eight from Monday to Friday and 12 on Saturday.

It was five years in his journey as a journalist that Mr Jumeau became assistant director of information services where he had the responsibility of Radio Television Seychelles (RTS) as well as Seychelles NATION.

“Every morning we would have a news editorial meeting which I chaired, bringing together representatives of radio, television and the newspaper. This was for the three government news services to coordinate news. Little did we know then that we were laying the foundation for what we are seeing today. But when I was in charge of the Seychelles NATION I did not model what we were doing on any government or public information services from anywhere; I actually looked to some of the biggest newspapers in the world which were privately owned.

“So the idea was to run a complete government-owned news publication along the lines of some of the world’s greatest newspapers like the London Times. I used to look at different tabloids to see how they were planned and laid out and around the same time, Denis Rose, another journalist who had gone for training, came back and he was more into how to put a newspaper together,” Mr Jumeau recalled.

Mr Jumeau said at that time the newspaper’s content was all about the work of the government “but it was also the time when the country was building what exists today and our reporting reflected the building of a country”.

Commenting on the evolution and the various stages of transformation the newspaper went through over the years, Mr Jumeau said they were inevitable and a natural process.

“As society changes the media too changes. All the different media we have today is a reflection of the society we live in,” said Mr Jumeau.

But Mr Jumeau believes that with the introduction of all the different social media platforms, newspapers have suffered greatly and this has been the case all over the world. But he admitted that in spite of that, newspapers around the world have remained relevant and they have striven to adapt well to the changes.

He said this is also the case for newspapers in Seychelles.

“Newspapers have online versions and their own apps and they know who their targets are but one thing which is missing here is polling and internet surveys,” he said.

But still here many newspapers have opened and closed, a few of them are still in publication and have remained strong including Seychelles NATION which since 2010 has stopped receiving any budget from government and has had to source out its own funding to support its publication and staff of over 40 personnel.

Mr Jumeau noted that Seychelles NATION has over the years established its clientele and readership and coupled with the fact that all government ministries and departments were obliged to take a copy of the paper for record, this also helped it financially and today even if its readership may have waned and business fallen, Seychelles NATION still remains a reference newspaper for many as it makes fewer mistakes and it is more factual and it is not a newspaper you go to for sensational news.

“But I would say it has always been at the centre of government discourse as well as public discourse.”

“But now that we are no longer in the one party state, we have a livelier media but does the newspaper increasingly reflect the lively and sometimes aggressive multi-party situation?” Mr Jumeau queried.

“In fact we are seeing, despite the change in government, that the attitude of people in government has not necessarily changed. This is clear in how the government reacts to lines of questioning that it thinks does not make it look good,” he pointed out.

Asked how he foresees the future of the print media, Mr Jumeau said: “People have been predicting the death of newspapers in hard copies for a long time but this has not happened.”

“But frankly it is difficult to say where we’re heading, what technology is going to come in the future… Who knows but I think the death of print media has been greatly exaggerated.”

Looking at newspapers today, is Mr Jumeau satisfied with the way they are doing their job?

“There are too many assumptions in articles and the editorial team needs to do more cross checking and should not accept things like “the authorities” for instance because there are many people in authority who speak. It is therefore better for journalists to be precise.

With regards to content, Mr Jumeau said all the media has the same hard news content more or less which is maybe inevitable as we are a small society but each media house should aim to have their own scoops. He added that Seychelles NATION is often late with the news but in the social media age this again is probably inevitable and established media houses will always be late with the news.

“But we look to you to fill in the blanks and give all the factual details. So even if others beat you to the news, people will always come back to you to get all the facts.”

Most memorable as well as difficult times working for Seychelles NATION

Mr Jumeau will never forget the fright of his life on the evening of the mercenary attack on November 25, 1981.

“That evening an army truck with just the driver took me from the Seychelles NATION and Radio Seychelles headquarters at Union Vale and drove me all the way up to the military academy past the airport at Pointe Larue where it was believed the attack was still underway to photograph the first mercenaries who had been captured. The place was in complete darkness but they switched on the lights of his cell at the academy just long enough for me to take one or two photos,” Mr Jumeau remembered.

Driving back past the darkened airport on the way to and from the academy was the most frightening time of my life especially when machine guns began firing as we left the academy and the driver drove at breakneck speed. I will never forget that evening,” Mr Jumeau recalled.

Meanwhile, Mr Jumeau described the weeks before he left his job at the information services in 1991 as the most difficult time for him at the newspaper.

“This was because at that time I was in disagreement with the government’s information policy during the transition to multi-party rule.

“My father was a top official in the ruling party, the Seychelles People’s Progressive Front (SPPF) and I didn’t want anything I did to jeopardise him, my family, my staff and work colleagues in the information services. So I talked to him about how conflicted I was. Noting that the country was going through tense and unprecedented times, he said either I took the way things were changing or if my conscience didn’t allow me to do so, to walk away. After taking steps to ensure my decision wouldn’t have any ramifications for my father, family, staff and colleagues, I chose to walk away,” said Mr Jumeau.

But if today he was to be asked to return to take a position at the newspaper?

Mr Jumeau said even if writing is in his blood, he has already moved on and those days are behind him. He said he continues to read all newspapers everyday but, their online versions, looking for items to tweet especially those relating to the environment and climate change. He said often when there is information he finds missing in the articles he would fill them out before distributing them to the world.

“The many experiences gained and lessons learned from journalists, photographers, editors and other members of staff of Seychelles NATION during the 13 years I worked there, helped me years later as a global ambassador and advocate for Seychelles, small islands and the ocean this past decade and more.

“May it do the same for all the staff now and in the future as Seychelles NATION continues to evolve as the newspaper of record of a lively and growing democracy,” concluded Mr Jumeau. 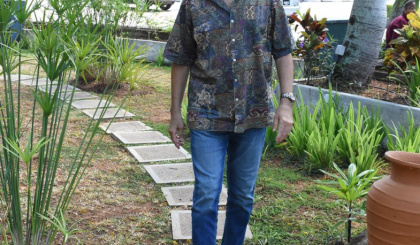