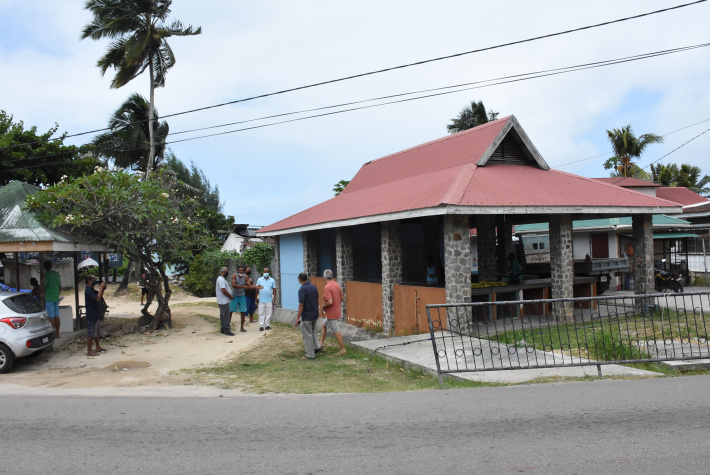 The existing market will be refurbished so that it can be used by fishermen during the time that the new one is being built (Photo: Joena Meme)

The fishing community of Anse Aux Pins and surrounding areas will soon have a fish market which will allow them to operate in a more conducive and hygienic environment.

A consultative meeting was organised on Saturday so that fishermen of the area could see the plans and layout of the new fish market as well as give their opinion on what they would like added or improved.

The meeting was attended by the member of the National Assembly for Anse Aux Pins, Honourable Clifford Andre; the district administrator, Andre Gabriel; representatives from the Seychelles Fishing Authority who included the project manager, Andrew Bristol; and the district's fishermen.

In addition to the fish market, there will be new facilities which will include a gear store comprising 12 units to be rented out to fishermen, a 5-ton ice-plant, adjoining parking lay-by, an area to load and unload fish, fish cleaning area, and toilets.

The new market will be built opposite the district administration office next to the current dilapidated one.

The project, which is expected to cost R16 million, will be funded by the European Union under the Fisheries Partnership Agreement which aims to promote artisanal fisheries infrastructure and development, ultimately supporting the sustainability of Seychelles' fisheries, including the regional tuna fisheries.

Presenting the project, Mr Bristol said it will be built in two phases, the first of which will be the infrastructure while the second phase will include the civil work where a sea wall will be built.

The market and its facilities will be maintained by the SFA for the time being, but Mr Bristol has advised the fishermen to form an association for their district that will manage the market and facilities.

“Every district needs to have their fishermen's association to take over the management of their respective fish market, but for the time being maintenance will fall under the care of SFA,” said the project manager.

He further added that once the association is formed, SFA will provide it with a maintenance budget.

While the market is under construction, temporary arrangements have been made for the fishermen to sell their catch at the old fish market which will be refurbished.

In addition there were heavy discussions about removing sellers by the road side and placing them in the temporary market. However, the MNA noted that due to space constraints at the old market they cannot force fishermen to move there but when the project is complete and there is adequate space for everyone then something can be done about fishermen who sell their products by the road side and bus stop.

As for the turn-out at the meeting, Hon. Andre said he is disappointed as he would have appreciated more fishermen to come and give their inputs so as to avoid complications along the road.

The meeting ended with all fishermen present giving the go ahead for the project. 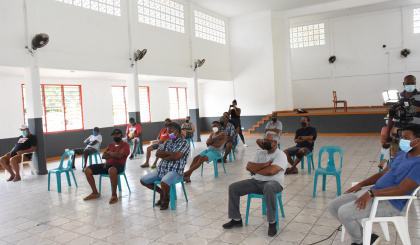