The signing of the agreement (Photo: Jude Morel)

The Palais de Justice which was officially inaugurated in 2013 will soon undergo refurbishment which will include a fresh coat of paint and some repair work.

Given that the government of China sponsored the construction of the building, it has agreed that the Sinohydro contractors take care of the exteriors to improve its outlook.

To finalise the deal, an exchange of agreement took place yesterday at the Palais de Justice between Chief Justice Rony Govinden, the principal secretary for infrastructure in the Ministry of Lands & Housing, Yves Choppy, and the resident director and chief representative of Sinohydro Contraction Company Liu Hongde.

This initiative follows from an official visit by the Chinese Councillor Wong Yong, who made visits to various projects initiated by the Chinese government. After visiting the Palais de Justice building in December 2019, proposals began and were initiated for renovation works to take place.

“This refurbishment project will cater only for the exterior of the building. The Palais de Justice will get a facelift and will be repainted. The renovation project is supposed to last for four months.

Mr Choppy noted that “when Seychelles receives a grant, there are some obligations to use certain products coming from that country. Different grants involve different levels of consultation from the government and this is done as we go along and notice the issues. With the new upcoming projects, we have more detailed input with the embassies. One thing we have learned is that we need to adopt the materials used to our climate and environment”.

Mr Choppy added that the next step will be the appointment of a joint management project committee with representatives of the contractors, department of infrastructure and the judiciary.

“It is then we will discuss how the work will be done and the timing also so that it does not impact on the functioning of the judiciary,” PS Choppy said.

Mr Liu noted that “this project is one of the outcomes of the friendly and successful visit of State Councillor Wang Yong of the People's Republic of China to Seychelles in December 2019. Sinohydro, on behalf of POWERCHINA, will undertake the project with the planned construction time of four months and total cost of 1.716 million RMB. Sinohydro is honoured to demonstrate corporate social responsibility and make a contribution to Seychelles”.

The ambassador of China to Seychelles, Guo Wei, talked about the importance of the ‘Palais de Justice’ and how her government is proud to assist Seychelles in maintaining the building.

On behalf of the judiciary, Chief Justice Govinden thanked the Chinese government for its continuous support.

To recall, the Palais de Justice at Ile du Port was officially opened by former President James Michel and it houses the Supreme Court and the Court of Appeal of the Seychelles. It has cost US $6 million and was funded by the People's Republic of China and built in partnership with the government of Seychelles.

The Palais de Justice, occupying more than 5,000 square metres, has 10 court rooms that host a range of advanced technology including security video surveillance, internal broadcast and PA systems, electronic information and video panels for visitors and staff, video and audio recording and playing systems for court proceedings, computer systems connected to outside servers, and ability to connect to video-links from international locations. 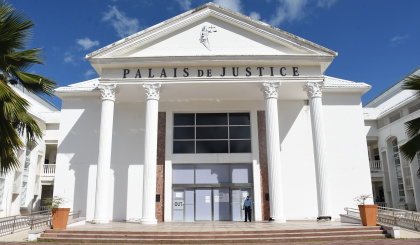 The Palais De Justice will get a facelift (Photo: Jude Morel)