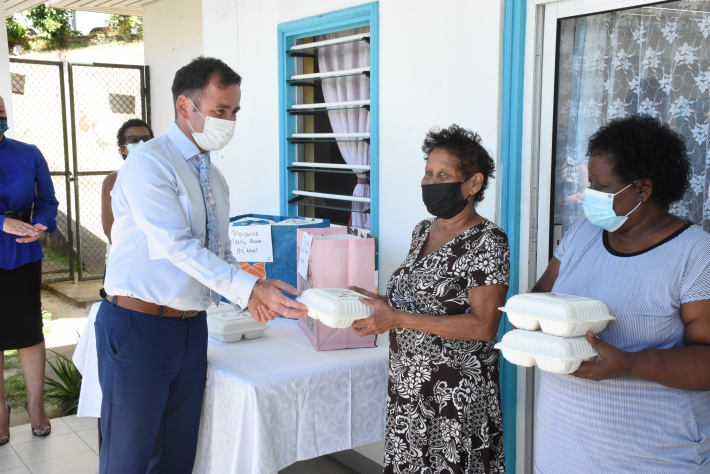 BHC Lynch handing over the donation at the Plaisance Home for the Elderly (Photo: Louis Toussaint)

The British high commission in Seychelles yesterday delivered 400 ‘Great British Afternoon Teas’ across Mahé to commemorate the occasion of the official birthday of Her Majesty Queen Elizabeth II, which is celebrated every second Saturday of June.

The initiative was held to recognise the efforts of health workers, community-based officials, staff and residents of care homes, all of whom had been especially impacted by the pandemic.

The high commission delivered to a total of 13 locations across the island over the course of the day.

British high commissioner, Patrick Lynch, started the ‘Great British Afternoon Tea’ deliveries at the Home for the Elderly in Plaisance where he met with the director of Homes at the National Council for the Elderly Lisa Cadeau, as well as the staff and elderly residents.

Later in the day, High Commissioner Lynch made deliveries to the Seychelles Hospital, where he was received by the deputy chief executive of the Health Care Agency, Kathleen Cecile.

“Usually during this time of the year, we would have a formal Queen’s birthday party at our residence with over 200 guests but this year it was impossible due to the Covid-19 restrictions which we fully support. We all have a responsibility to do all that we can not to put others at risk,” noted High Commissioner Lynch while at the Plaisance Home for the Elderly.

“Instead, in a Covid-safe way, we are focusing on saying thank you to health care workers and to staff and residents in care homes for the elderly and children in Seychelles. These are the groups that have been most affected by the pandemic and these are also the group that live out the UK and Seychelles shared values of community, of protecting and respecting the vulnerable.”

On her part, Ms Cadeau thanked the British high commission on behalf of the elderly residents at the care homes for its generosity.

High Commissioner Lynch noted that the British high commission is working to assist the elderly homes in other ways in the coming months.