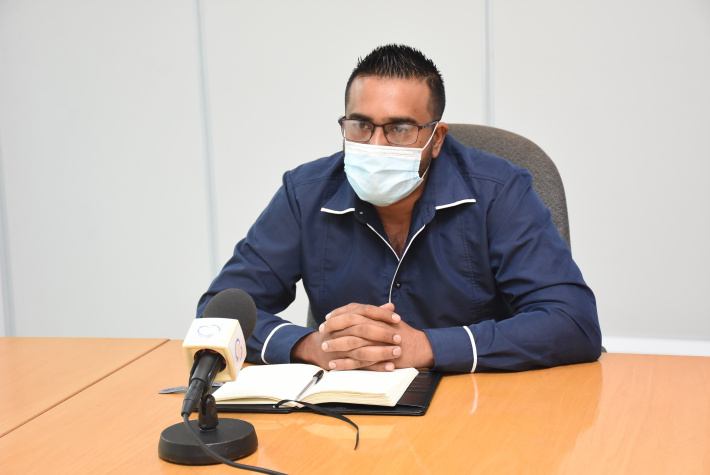 The director general Trade Division, Ashik Hassan, has said that the ‘task force’ set up last week by the Ministry of Finance, Economic Planning and Trade to improve the current clearing procedures for couriers, will over the next two weeks meet up with key stakeholders to identify the causes of the bottlenecks.

Mr Hassan made the statement on the matter to the press yesterday morning at the Trade Division, Maison Esplanade.

This follows the numerous complaints brought to the attention of the government on parcels that are taking less time in transit than they do when they arrive in the country.

He noted that the issue is causing frustrations among members of the public and businesses and needs to be rectified.

He also noted that the task force has been preparing internally during the past week for the meeting with key stakeholders over the next two weeks.

“We will have to look for bottlenecks from the government side and also on the private sector side, and that is the courier operators, and also in terms of infrastructure and the system that we have in place,” he added.

He stated that although people from outside are questioning the usage of Customs Division current Data Processing System known as ASYCUDA as part of the reasons for the bottleneck, the exercise needs to be held first to identify the real causes for delays in delivering of parcels. He said the ministry is working to upgrade the system.

”We don’t believe ASYCUDA is the issue. The issue is in terms of the processes involved in the clearance of courier parcels,” he added, highlighting that the system comes into service only when the overseas order exceeds R5000 for which a bill of entry is required.

Mr Hassan noted that the exercise will be very comprehensive and will include auditing of the entire valued chain, which will be mapped out to identify the bottlenecks or areas that could be improved.

He said that the main stakeholders that will be working with the task force are the courier companies and customs including Air Seychelles as the ground handler, among other key players to be identified.

“We do recognise that there are certain challenges, some could be small, some could be bigger issues, but we need to take a comprehensive approach and not to make fragmented policy decision. We need to establish the whole value chain. See what all the problems are and put a series of recommendations that address the entirety of the operation and from there we hope to have an efficient and streamlined system that the public will benefit.

Mr Hassan said that the task force will meet its deadline to present its report in the coming five weeks to the Minister for Finance, Economic Planning & Trade, Naadir Hassan, for approval by cabinet.

He stated that apart from scrutinising the clearing procedures of couriers, the ministry is also doing an exercise to address the time it takes to clear merchandise in the port, among other aspects being brought under the microscope, such as digitalisng the custom service, to bring more efficiency.