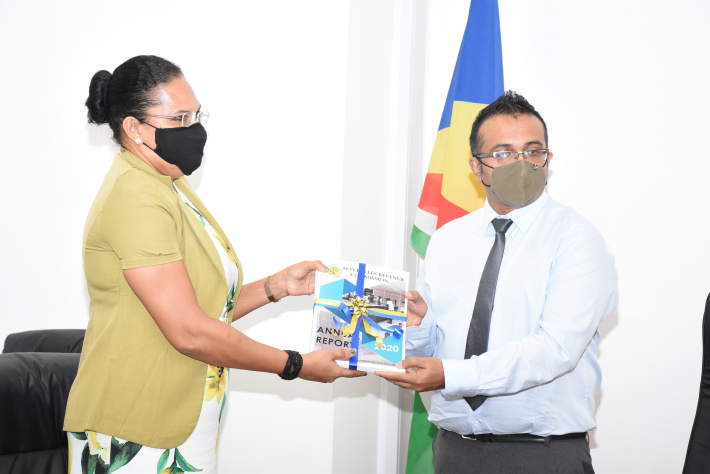 The Seychelles Revenue Commission collected a total of R6.3 billion over 2020, as compared to the projected R6.1 billion target set by the Ministry of Finance, Economic Planning and Trade, according to the 2020 annual report.

Copies of the report were yesterday presented to Finance, Economic Planning and Trade Minister Naadir Hassan, during a brief ceremony held at Liberty House and attended by officials of the Seychelles Revenue Commission (SRC) including commissioner Veronique Herminie, deputy commissioner Fred Morel and director of corporate affairs and research Emmaline Camille.

Providing an overview of revenue collection over a year whereby the economy slid into decline, Ms Camille noted that revenue collection was R900 million down from 2018 and 2019, whereby R7.2 billion was collected in revenue, despite a higher quantity of registered taxpayers in 2020.

Revenues collected specifically from tax lines, including income tax, excise tax, business tax, presumptive tax and property tax amounted to R6.014.05 over the year, 97.01 percent of which was contributed by tax payers on Mahé.

Despite last year’s performance, as the economy shows signs of recovering, SRC has recorded an increase in revenue collection for the first quarter of 2021.

“For this year, the forecast is almost the same as last year, at R6.17 billion. Obviously this is a bit low on account of the Covid-19 situation which resulted in a decline in the economy, but we think as the economy picks up, we will collect a bit more. If we consider the beginning of this year, we are doing fairly well,” she said.

“From January 2021 up until now, we have collected R2.45 billion, against the forecast which stands at R2.36 billion from our main tax lines. So this over performance up to now is around R87.24 million. This is even more than what we collected last year for the same time frame,” Mr Morel explained.

He attributes the increase to more transparency and efficiency within the institution, as it pushed towards enhancing compliance in tax collection.

“For the first quarter, when we analysed, the programmes we conducted have reaped some better results than last year. We have come forward to the media, and we have pronounced ourselves on our activities, raised penalties, conduct follow-ups early with reminders and people in arrears, we are involved in default assessments for persons who are not paying. However, there are some sectors who haven’t performed too badly over last year, so their collection has been better, while some sectors have been more affected,” Mr Morel added.

In going forward, SRC is seeking to modernise taxation laws and implement amendments to business tax towards a broader tax base and lower taxes. 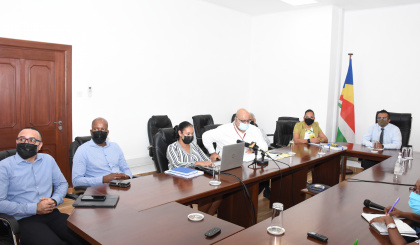 The SRC team talking to the press in the presence of Minister Hassan and other finance officials (Photo: Louis Toussaint)