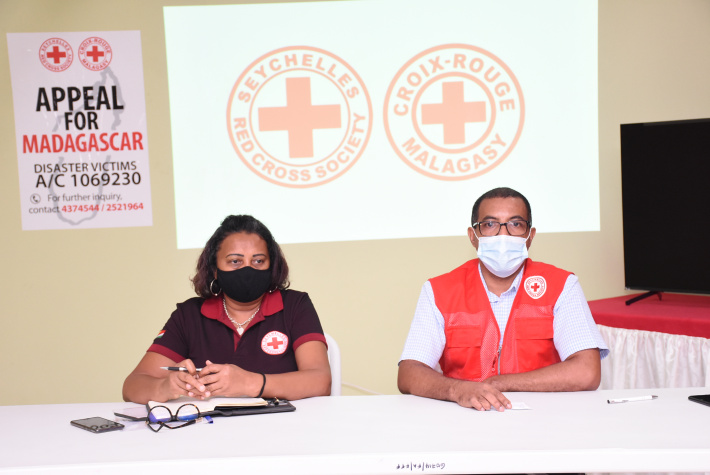 The Red Cross Society of Seychelles (RCSS) is urging Seychellois to contribute towards a disaster fund that has been set up to help famine-stricken Madagascar.

The appeal was launched yesterday through a press conference.

Madagascar is currently going through what has been described as the worst drought in 40 years, the impact of which has been felt mainly in the south of the island, sending millions of Malagasy into famine.

President of RCSS, Kishnan Tamatave, said that the Red Cross Society in Madagascar reached out in an appeal for help with its crisis and RCSS immediately agreed to lend a helping hand.

“While in communication with the Red Cross president in Madagascar, he made us aware that they are on field helping over ten thousand people. However they cannot continue to do more as their funds are running low and they do not have enough resources for the number of victims on their hands. He also added that the situation is critical in urban areas and getting access to victims is a challenge,” said Mr Tamatave.

To help with this situation the RCSS has set up a Disaster Fund at the Absa bank with the account number A/C 1069230. The account will remain open for one month and Mr Tamatave is urging anyone who can make a contribution to the fund to do so.

“With the current financial situation we are in ourselves, we know that we cannot make a big contribution, however we have identified Tanandava and Ambatoabotwo districts in Fort Dauphin region where the money will be sent to,” Mr Tamatave said.

He added that the Red Cross society in Madagascar considers what Seychelles is doing as a noble gesture since we have a small Red Cross organisation compared to other countries in the Indian Ocean.

Marie-May Esparon, secretary general of RCSS, said that they will accept only monetary contributions as there are many logistics that come with exporting food and clothes.

She added that they do not have a specific goal in mind when it comes to the amount of funds but they will accept whatever they receive.

Both Ms Esparon and Mr Tamatave said that it is important to stand in solidarity with Madagascar as we have been helped by international organisations as well in the past.

The money given will go towards food and water as well as other necessities.