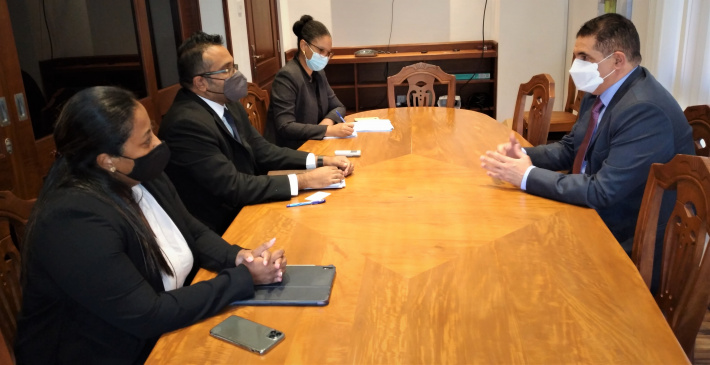 The Kingdom of Bahrain and Seychelles will explore ways to strengthen economic cooperation and boost relations between them.

This came out during talks between the Minister for Finance, Economic Planning and Trade Naadir Hassan and the new ambassador of the Kingdom of Bahrain to Seychelles, Sheikh Khalid Bin Abdullah Al Khalifa, yesterday afternoon.

Minister Hassan welcomed Ambassador Al Khalifa for the talks in his office at Liberty House.

During the meeting Ambassador Al Khalifa stressed on the strong relations that already exist between Seychelles and Bahrain, but he said there is a need to build on that foundation.

Seychelles and Bahrain established diplomatic ties in May 1983.

“We have the foundation now we need to do more,” said Ambassador Al Khalifa.

Minister Hassan has welcomed the Ambassador’s appeal to build on the existing foundation.

“It is time for action, where we can work together in mutual respect.”

Seychelles and Bahrain have cooperated in many fields, including financial services.

Today, Al Salam Bank, a Bahraini bank, has a branch in Seychelles.

“As a banker, I know that banking relationship is built on trust, and Al Salam is doing well here, so there is potential for further cooperation in the financial sector,” said Minister Hassan.

Minister Hassan is also encouraging investors from Bahrain to invest in Seychelles, namely in fisheries, tourism, agriculture and infrastructure.

Bahrain, a small island in the Gulf region, is today not only relying entirely on the exportation of oil and gas, but it has also diversified its economy in developing its financial sector and tourism.